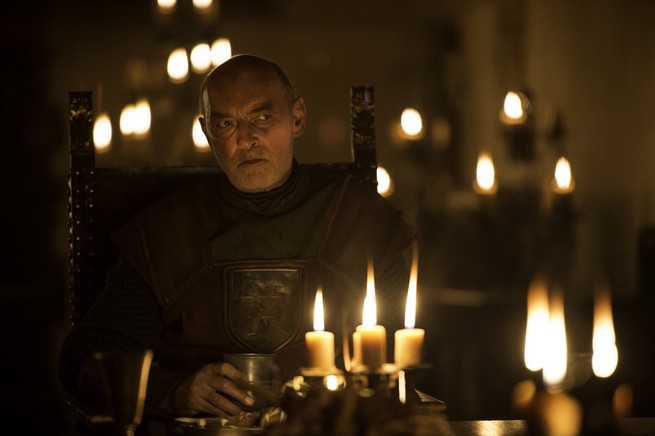 There was a brief moment during the Benjen is Coldhands reveal when I considered giving up on the show. That theory is one of my least favorite prevalent ones because it’s easily debunked in the books. I even wrote an article on it last year. Benjen can be “Showhands,” but it just doesn’t make sense in the books.

I felt a change of heart as I realized that this is actually a good thing. Benjen as Coldhands isn’t a book spoiler at all. It almost has the reverse effect as it reminds us that these are two separate entities. Benjen being Coldhands worked in the show because he revealed himself early on in the rescue (as opposed to leading Samwell and Gilly to the Wall and Bran and his friends to Bloodraven without a single mention of being a Stark) and the show also needed to give us an answer as to what the hell happened to him, something it doesn’t have all the time in the world to explain.

The one thing that needs to be criticized is the handling of Hodor’s death. For a show that dedicated several scenes last season to Brienne mourning Renly’s death that happened three seasons prior, it’s disgraceful that neither Bran nor Meera acknowledged the death of their fearless companion considering both ruined his whole life. Hodor’s death reminded us that a show with as much death as Game of Thrones can still use it as an emotional hook. Improperly handling the aftermath makes it harder to care.

This episode gave us two plotlines that the show had previously skipped over with Coldhands and the siege of Riverrun, which happened in A Dance with Dragons and A Feast for Crows. I doubt many people expected either Brienne or Jaime in the Riverlands at this point and now they both will be. The show has different obligations than the books, but I like that it still managed to work in good storylines that wouldn’t have worked in previous seasons.

The aftermath Red Wedding was never really addressed and didn’t necessarily need to be, but Walder Frey is too good of a villain not to feature again. Like many, I questioned Edmure Tully’s future on the show given Tobias Menzies’ obligations to Outlander. In the books, the Freys get to keep Riverrun after Jaime brokers a deal that sends Lord Tully to Casterly Rock to live a comfortable, yet imprisoned, life. I doubt this will happen this way given the presence of Brienne and Co., but it will be interesting to watch.

I’ve criticized the show in the past for making the figures in power in King’s Landing look ridiculously weak. Sending Jaime to help the Freys shows that the powers that be still have power. What this means long term, when Dany’s arrival appears to be in the not so distant future remains to be seen, but it’s important to show that KL isn’t just a setting for a soap opera.

The payoff for the High Sparrow stuff was rather underwhelming. It’s hard to care all that much with the White Walkers and Dany’s massive army, but the storyline moved perhaps a little too slow for its own good. We were treated to far too many High Sparrow lectures over the course of this season. I did think there was a good chance that Margaery could be killed, which would have likely pitted the Tyrells and the Lannisters against each other. That would have been far more interesting than what actually happened.

I’ve been pretty complimentary of Arya’s progress in Braavos for most of the season. I don’t love her decision to leave the House of Black and White, but it’s too early to condemn it entirely. It’s only natural that she feels a sense of loyalty to her family. Her driving force to leave Westeros, both in the books and the show, is that they’re all gone. There’s nothing left for her. We, the viewers, know this isn’t true. Bran and Rickon are alive and Sansa has escaped. She doesn’t. It seems almost unfair to Jaqen, who’s been fairly loyal to her.

Mixed feelings about the Sam/Horn Hill storyline. It was good TV. The presence of James Faulkner, who played a similarly sinister patriarch on Downton Abbey, enhanced the soapiness of the whole plotline. In the books, Lord Tarly is a highly respected battle commander, even recommended for Hand of the King by Kevan Lannister. Here, he’s quarreling with his son away from anything meaningful.

That goes for Sam as well. This season has really done a number on the credibility of the Night’s Watch. Jon is allowed to quit and Sam can go off gallivanting with Gilly. What do vows even mean anymore?

Dany didn’t do much. I talked about the fast pacing of her storyline two weeks ago. The Drogon appearance was very cool although as my sister noted, her horse seemed to have vanished.

It’s clear that Yara/Reek will supply at least some of Dany’s ships. I’m curious to see where she goes from there. The mainland of Westeros seems like the logical choice, but Euron/the Slaver’s could take her in a number of directions.

That’s it for this week. No Tyrion, Jon, Sansa, Ramsey, or Hodor… ever again. See you next week.