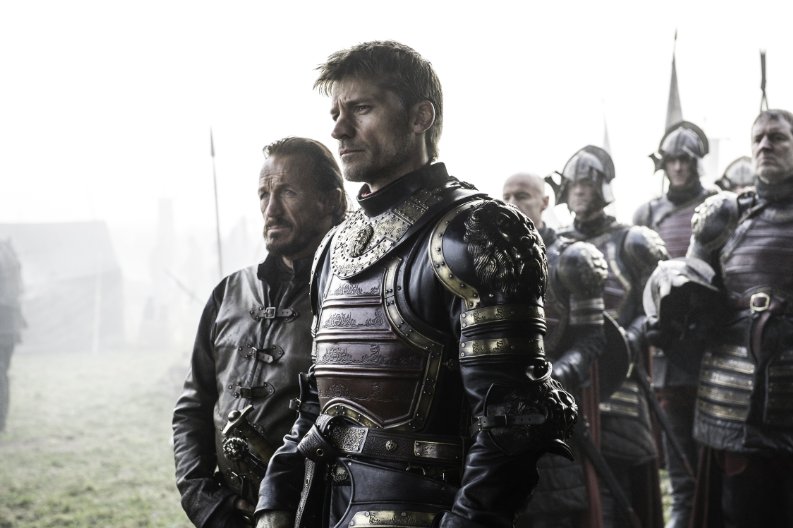 Tonight’s episode was unusual in that it showed a scene before the credits. I’m glad that the reappearance of The Hound and the introduction of Ian McShane were given such special treatment. In the books, the Hound’s reappearance is never actually confirmed, though he is heavily implied to be the Gravedigger at the Quiet Isles, which Brienne and Podrick travel through.

The Hound’s storyline is one that I can’t really judge as of this episode. My biggest concern is that in the books, he’s one of the few characters to achieve the ever evasive peace that eludes just about everyone else. Sandor gets a second chance to live out his days free of the hate he carried with him his entire life. While the book series isn’t over, there isn’t much reason to believe we’ll see him again besides the much anticipated CleganeBowl, which I personally loathe and hope never happens.

The show appears to take a different approach. I doubt we’ve seen the last of the Hound. The problem with this is that his season and a half long quest with Arya softened the character significantly more than the books ever had, making a redemption narrative seem quite unnecessary. He doesn’t fight Brienne in the books, though since they’re both in the Riverlands, a reunion seems likely.

Ian McShane’s appearance as Brother Ray was good, but his death was not at all surprising. McShane made headlines for leaking information about his appearance a couple months ago, which basically gave away the fact that he wasn’t going to be around for very long. His overall impact is yet to be determined, but it was a good little mini-arc.

The absence of Lady Stoneheart makes the villainous turn of the Brotherhood Without Banners fairly confusing. None of the members of the group, even Thoros of Myr, are particularly devout followers of the Red God, which the show seems to want to use in an effort to make them appear more evil than we’ve actually seen. It’ll be interesting to see if they capture Brienne and Podrick as they do in the books. Part of me thinks they won’t, but there isn’t exactly a clear direction for that storyline either.

King’s Landing got a little more interesting, even if we were treated to yet another High Sparrow lecture. Margaery has mostly been sidelined this season and it was nice to see her get something to do. With the Queen of Thorns out of the picture, I suspect a Margaery/Cersei alliance could be in the works, which would make up for the uneven nature of this plotline as a whole.

The scene between Cersei and Olenna was perhaps the strongest of the episode, though the Blackfish/Jaime parley gives it a run for its money. We as viewers know that Cersei has made a huge mess and has essentially zero allies and thousands of enemies. I’ve often criticized KL as a whole for looking too weak to command any kind of power. Olenna reminds us that this sentiment is shared by many in Westeros.

The Riverlands were spectacular. Loved seeing Bronn back. Loved seeing the Blackfish. The scene with the Freys threatening to kill Edmure was practically identical to the books. The scene between the Freys and Jaime highlighted the poor battle strategy/bad attitude of House Frey in general. The worst part about no Lady Stoneheart/evil BWB is that they likely won’t go around killing Freys. Bummer.

Jaime really hadn’t done anything interesting since season three, mostly acting as a supporting character/taking part in the show’s worst plotline. I didn’t necessarily care that the Riverlands plotline was cut from last season, but it has been very strong so far this year.

Very conflicted about the Northern campaigning. Stannis did much of that off book in A Dance with Dragons. Longtime readers of my recaps know how I feel about him. These scenes were mostly strong, especially Davos, but there was one big elephant in the room the show failed to address.

The show was smart to acknowledge the problem of Sansa’s marriages to Tyrion and Ramsey, but failed to really address the fact that Jon is an undead Night’s Watch deserter. Why should any house trust him? Davos could’ve included a defense of Jon into his beautiful speech…

Does Lady Mormont count amongst the sixty-two Mormont troops? I hope so.

The scene with House Glover was my favorite of the Northern campaign as it highlighted something I’ve been saying for years. Robb made a lot of mistakes as king. The North bled for him while he spent most of A Storm of Swords/season 3 ensuring they’d lose. Loyalty only goes so far. As sad as it sounds, House Glover is smart to stay out of it.

Worst line of the night was when Sansa was critical of Stannis’ military prowess. Has she not heard of the Siege of Storms End, the Assault on Dragonstone, and the Greyjoy Rebellion. Maester Luwin didn’t do a very good job teaching the Stark children about history.

Tough to really analyze Arya’s stabbing. Will the theatre performers save her? Will she become Coldhands 2? Will she get another seen with Jaqen? I’ve been pretty complimentary of Arya’s plotline throughout the season, but this development was pretty puzzling.

Yara telling Reek to toughen up made for good TV, but he’s still an odd character. Did saving Sansa make up for all the other crap he’d pulled? I guess so.

That’s all for this week. No Dany, Tyrion, Strong Belwas, Coldhands, or Dornishmen. As a special programming note, my live video recap this week featured my sister, Bibble of House Malone. Check it out if you haven’t already. Thank you for watching.