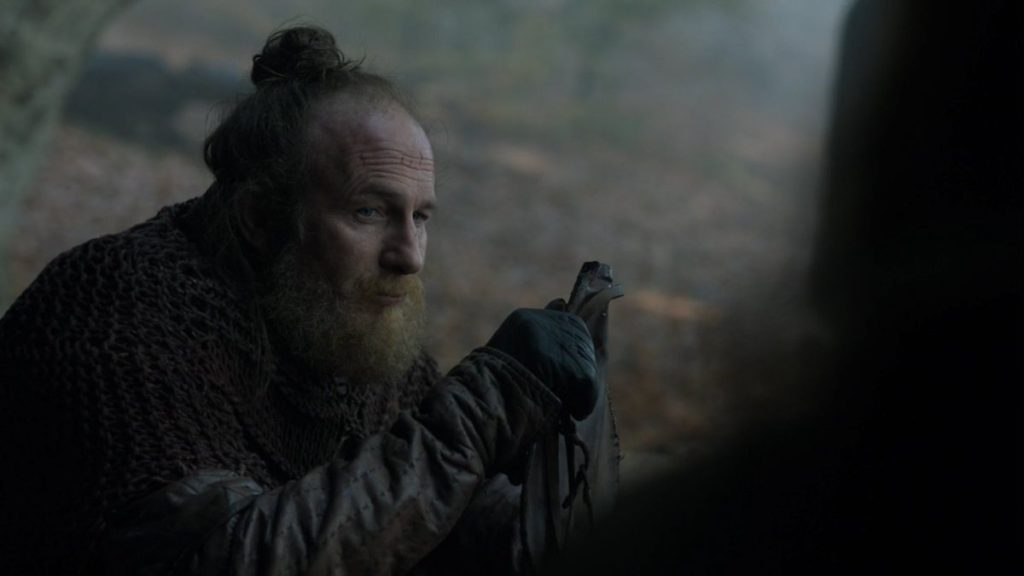 I wonder how many people could receive multiple stab wounds to the vital organs region and still be able to run through a city in a Jason Bourne style chase? The morality surrounding Arya’s decision to leave the House of Black and White is essentially black and white. Jaqen took Arya in when she had nowhere else to go and trained her. In return, she broke the rules several times and abandoned him. As viewers and fans, we can be excited for Arya’s return to Westeros, but I think it’s important to acknowledge that she’s essentially defaulting on her student loans.

Many fans asked me about the potential “Jaqen as Arya” or “Waif is Arya” Fight Club twist this past week. Given Jaqen’s emotional ties to Arya, I didn’t want to rule it out. Their lackluster final scene certainly makes me wish that had actually happened.

Also, it was very rude of Arya to criticize Lady Crane’s soup. Being stabbed is no excuse to skirt one’s manners!

Could have done without the finger in butthole joke. Still hesitant to judge The Hound’s return until we see more. Under normal circumstances, I’d praise a potential alliance with the Brotherhood Without Banners given the need to give The Hound something to do. Problem is, the show didn’t need to give him anything to do. He could have just stayed dead.

The rapport between the Hound/Beric/Thoros (who rocked an awesome top knot) were pretty great. I wasn’t a big fan of the evil turn of the BWB last week and it seemed odd to see them completely reverse course an episode later, especially considering we haven’t seen them since season three. I also found it interesting that Beric knew about the White Walkers. As we saw with Lord Tarly, most of Westeros is either skeptical or unaware of the problems north of the Wall. Unless Thoros’ powers extend beyond reviving Beric and having great hair, I’m not sure who would have told them. Rumors of a Lady Stoneheart appearance have increased over the past few weeks. I’m not sure that would be a great thing for the show, but I also don’t think there’s a single book fan out there, myself included, who wouldn’t want to see it.

Once again Varys and Tyrion, the most famous dwarf in the world, are walking around without guards. I suspect Varys will be on his way to kill Kevan and Pycelle, something I naively suggested could happen last season, though Varys never made it to Meereen in the books as he was backing (f)Aegon.

Varys’ heartfelt goodbye with Tyrion was a good scene, but also helped remind us just how wasted Peter Dinklage has been this season. The show has tried to made light of how awkward the Tyrion/Missandei/Grey Worm dynamic is, but self-awareness isn’t really an excuse. Meereen as a whole has been very weak this season.

I received a few questions about the rumor that Cersei and Qyburn discussed in the throne room. My best bet is that it had to do with Margaery’s insincere piety. A more fun show answer would be whether or not Lancel confessed to his part in Robert’s death and Cersei’s incestuous infidelity, but I’m not holding out hope. Or maybe the Sand Snakes will reappear… I hope not.

Interesting that both The Hound and The Mountain had gratuitously violent scenes. I’ve always hated the idea of Cleganebowl, but that certainly looked like a plus for that theory. While The Mountain/Frankenstrong has been a more than adequate bodyguard, if I were Cersei, I’d definitely beef up security given the absence of trial by combat.

Jaime’s scenes were my favorite of the episode. It is important to note the change in power dynamic between Cersei and Jaime from the books to the show. In the books, Jaime, still a member of the Kingsguard, leaves King’s Landing because he won’t serve as Hand. At this point in A Feast for Crows, Cersei has near complete authority over KL.

This distinction is important as it sort of undercut the Brienne/Jaime relationship. Here in the show, Jaime is still completely in love with Cersei. The absence of Lady Stoneheart (for now) removes the need for Jaime to rescue Brienne, robbing fans of their much desired courtship, even if it would have created a weird Brienne/Tormund/Jaime/Cersei love square.

Pod and Bronn’s scene was also quite fun. A nice throwback to the days when the show didn’t take itself so seriously.

Poor Edmure. At least Jaime accurately laid out the situation. I would note that the idea of “good guys” and “bad guys” is much more ambiguous in the books. Stark loyalists might feel some loyalty to Edmure, but he’s always been portrayed as weak in the show and has been absent since I was in college (season three). The books make it easier to choose whom to root for, but the Jaime/Edmure dynamic was certainly fun to watch.

It just seems odd that he’d pick a senseless death in the name of a good swordfight over fighting for his kin. Brienne’s escape also seems odd. She went there to recruit the Tully forces, something that wasn’t necessarily rendered void by Edmure’s surrendering of the castle. Couldn’t she have theoretically asked to have Edmure lead the Tully forces for Sansa? Oh well.

Where is Melisandre? Looking for Gendry?

Dany is back in Meereen. The pacing of her plotline has been pretty puzzling, though sensible I guess considering the bigger picture. I’ve said this before, but Meereen as a whole this season really made me wish they hadn’t killed off Ser Barristan, who is still alive in the books. Would have certainly given Tyrion some more characters to work with.

That’s it for this week. No Sansa, Jon, Reek, Yara, Bran, Showhands, or Hot Pie. See you next week!