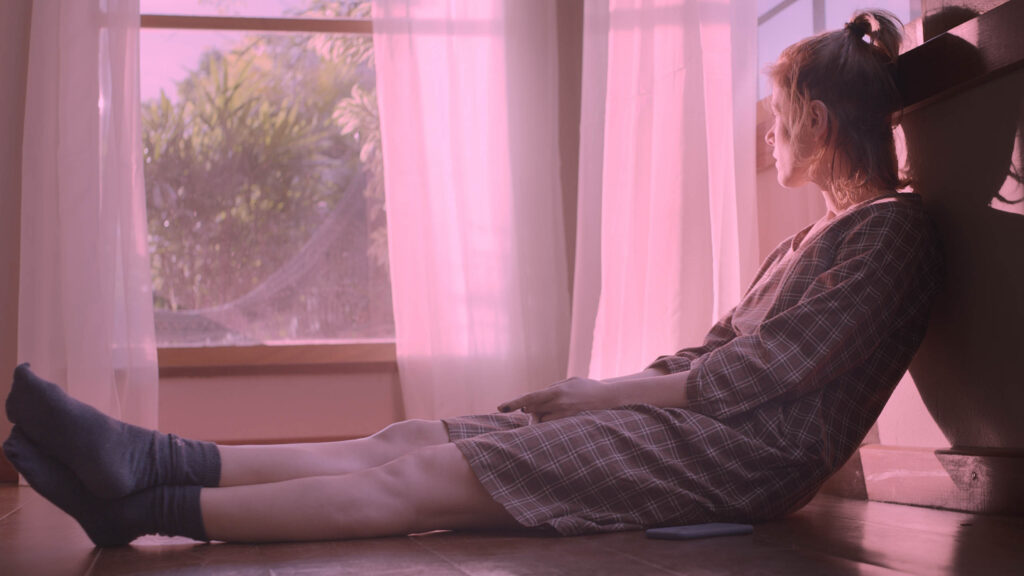 Renata de Lélis appears in The Pink Cloud by Iuli Gerbase, an official selection of the World Cinema Dramatic Competition at the 2021 Sundance Film Festival. Courtesy of Sundance Institute.

One has to feel for the plight of The Pink Cloud. Written in 2017 and filmed in 2019, facts plainly laid out by the film at its start, director Iuli Gerbase never set out to make a COVID-19 movie. Films don’t exist in vacuums, reflective of the times they debut in, leaving a totally different rubric through which to engage this breezy dystopia.

A pink cloud has engulfed the skies, deadly to humans after ten seconds of contact. The cloud can’t get in through cracks doors or windows, requiring much suspension of disbelief. Everyone is trapped in whatever building initially protected them from this deadly plague.

Giovana (Renata de Lélis) didn’t expect more than a one night stand when she invited Yago (Eduardo Mendonça) into her home. With the cloud hovering above, the two are stuck together, unsure if they even like each other. Like everyone else who stepped out to go to the grocery store or to a friend’s house, they don’t exactly have much of a choice.

Gerbase deserves a lot of credit for her accuracy in predicting how a global pandemic would unfold. Health care is a nightmare. Relationships are practically impossible, even under the best of circumstances. Video calls are not sufficient human interaction for anyone. Life is very, very hard.

The broader world-building leaves a lot to be desired. Set almost entirely from Giovana’s point of view in her fairly spacious home, Gerbase isn’t super interested in exploring the implications of a years’ long pandemic on society at large. After the past year, it’s practically impossible to believe that many national governments wouldn’t completely fall apart at the idea of having to care for billions of homebound people.

How badly you were affected by the cloud largely rests with where you were when it hit. Giovana has plenty of issues with depression, but the film suffers from its over-emphasis on her relatively rosier perch. There are a few subplots involving characters in far worse scenarios, occasionally in more interesting conflicts than Giovana and Yago’s. The other characters have extremely inconsistent screentime, making it harder to be invested in their seemingly compelling stories.

The 104-minute runtime is a little long for a film with no real sense of urgency toward its narrative. Gerbase keeps things interesting with her beautiful color scheme and inventive camera angles that keep the settings feeling fresh, even deep into the film’s third act. The script has an endearing dry wit to it, a subtle sense of humor that pops up when you least expect it.

No one working on The Pink Cloud expected to have their thesis tested before the film was even released. Under unexpected scrutiny from an audience with a newfound connection to the problems presented, Gerbase’s narrative holds up quite well. Beyond simple realism, the film also succeeds at being an entertaining pandemic narrative, no easy task for a world ready for things to go back to normal.