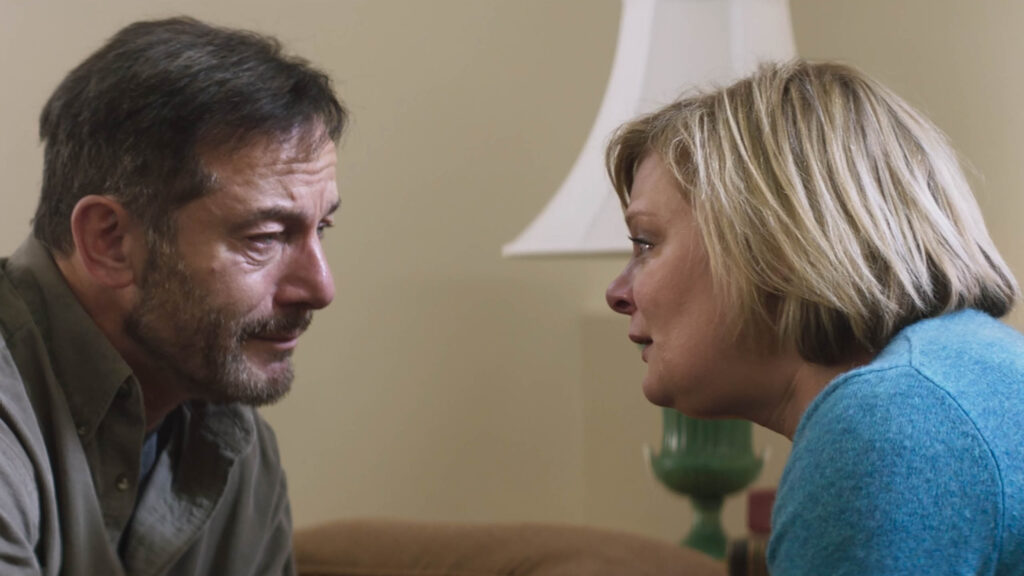 Jason Isaacs and Martha Plimpton appear in Mass by Fran Kranz, an official selection of the Premieres section at the 2021 Sundance Film Festival. Courtesy of Sundance Institute | photo by Ryan Jackson-Healy.

The success of any individual film largely rests in its ability to relate its themes to the audience. Some issues are obviously more relatable than others. Mass centers its narrative on the unthinkable, a grieving family sitting down with the parents of the boy who took their son’s life in a deadly school shooting.

An unassuming backroom in a small town church serves as the primary setting for Fran Kranz’s intimate drama. Judy (Breeda Wool) and Anthony (Kagen Albright) try to make the room as comfortable as possible, engaging in painfully awkward small talk with Kendra (Michelle N. Carter), a social worker who arranged the meeting. After a few short minutes essentially setting up the narrative’s primary objective, the three depart, leaving the four principal actors alone for the bulk of the remaining 111 minutes.

Jay (Jason Isaacs) and Gail (Martha Plimpton) wear their years of grief with every line of their faces. Worn down by their incalculable loss, Kranz quickly communicates the most important point. They’re not there because they want to be there. This effort at closure is pretty much the only move left to play in a last-ditch effort to move on from this unending darkness.

Linda (Ann Dowd) and Richard (Reed Birney) are essentially a more polished version of the same crushed template. The narrative quickly reveals a string of lawsuits filed against them in the wake of the shooting, peppering their cordiality with the aura of deliberation. Their son ruined countless lives in his spree of carnage, but Richard and Linda are kind of done apologizing. Their lives were wrecked, too.

With grace typically reserved for the stage, all four leads easily deliver the best performances of their respective careers. The tension in the room is unsettling, but you never really want to look away, not when Plimpton, Dowd, and Isaacs are showcasing their immense talents as they give everything to this unthinkable scenario.

Birney has a bit of a different role to play in the narrative. Richard wants to accommodate the lines of questioning, without relinquishing control. Rattled without the coaching from his legal team, Richard frequently comes across like an insensitive ass, engaging in pointless battles of semantics. Birney isn’t completely there to play the villain, but he succeeds in bringing out the best in Isaacs and Dowd in particular.

In many ways, the script is pretty insulated from normal methods of engagement. Is it realistic? Who can really answer that question?

Kranz’ screenplay does err on the side of caution a bit too much for a narrative so confined to one space. Mass never gives the sense that it’s about to devolve into a shouting match, but it doesn’t completely feel like everything was left on the table either. Maybe that’s not the worst thing in the world.

The script does succeed in two very important regards. Kranz never allows the audience to believe that this meeting was a mistake, which would in effect pour a bunch of gasoline on four souls who have seen enough grief to last a few lifetimes. It also never spends too much time on the politics at hand, keeping the whole exercise from feeling like a debate.

Mass could be described as powerful by the very nature of its premise. Kranz impresses in his directorial debut, repeatedly striking at the core of tragedy’s all-encompassing effects. Often brutal to watch and clearly not for everyone, the film offers its four stars the rare opportunity to completely carry the narrative off of the strength of their craft.