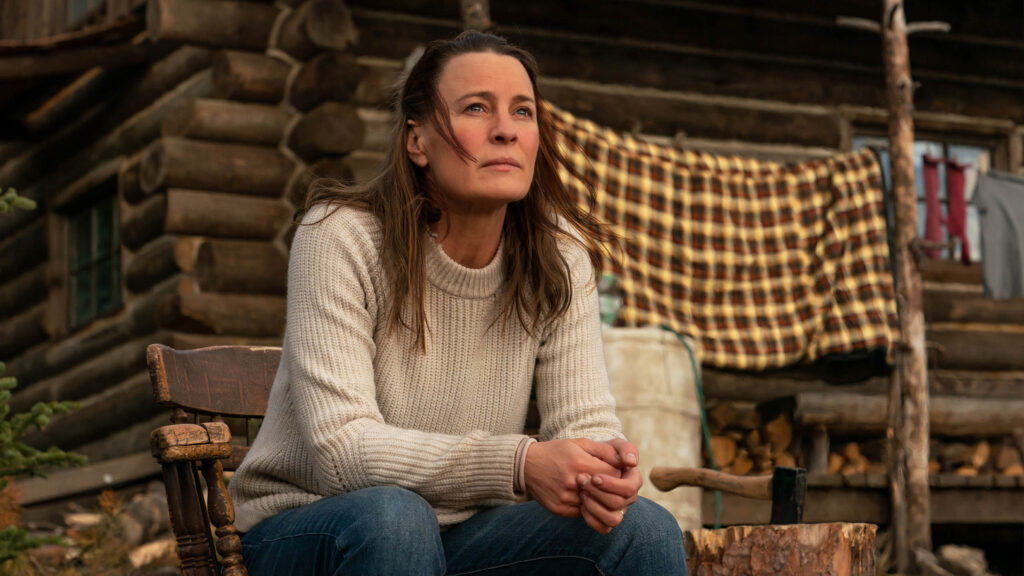 The shadow of Christopher McCandless, the subject of the book Into the Wild and its feature film adaptation, looms large over Robin Wright’s debut film. McCandless wandered into the Alaskan wilderness woefully ill-prepared for his Thoreau-inspired journey. His death, while tragic, came as little surprise to anyone with knowledge of the difficulties of that nomadic lifestyle.

One can’t help but shake the feeling that Land’s protagonist Edee (Wright) ventured onto her vast property in Wyoming inspired by the ease with which McCandless managed to end his life. Shunning the advice from a local to keep a car, Edee doesn’t know much about life in a log cabin, hardly able to heat up a can of chili.

We quickly learn that horrific personal tragedy prompted this self-exile. Edee doesn’t necessarily want to kill herself, but she’s kind of open should the idea present itself. Her basic lack of survival training is a good place to start.

Alternating between rustic and amateurish, Wright’s directing leaves a lot to be desired. Too many scenes are awkwardly framed, especially in the log cabin, feeling more like a clunky student film than serious drama. She fares a bit better outdoors, with the beautiful Rocky Mountains providing cover for her subpar filmmaking.

Everything about Land is formulaic and boiler plate. For a while at least, Wright hints that she’s playing Edee with a hidden sense of depth that’s going to be further explored. That never really happens. It’s a rather aloof performance by a talented actress clearly capable of better.

The second half is a bit more interesting than the first, aided by the introduction of Miguel (Demián Bichir), a local hunter who rescues Edee from starvation and hypothermia. Bichir gives Wright someone to work opposite, though in some ways his presence represents a weird abandonment of the film’s initial intentions to explore Edee’s desire to live a nomadic life.

Wright dances around themes of grief from time to time, never really engaging with the material on any serious level. With a brisk runtime of just under ninety minutes, Land hardly overstays its welcome, but the whole thing feels like one big missed opportunity.

Plenty can relate to Edee’s desire to unplug from the world and try to experiment with what it’s like to live off the grid. Land harnesses that relatable notion, but the script would rather have its nomadic-minded protagonist cede her independence to be rescued by a man, for little other reason than to give her something to do. Wright never projects like she’s trying to do more than the bare minimum to make a movie. What a waste.