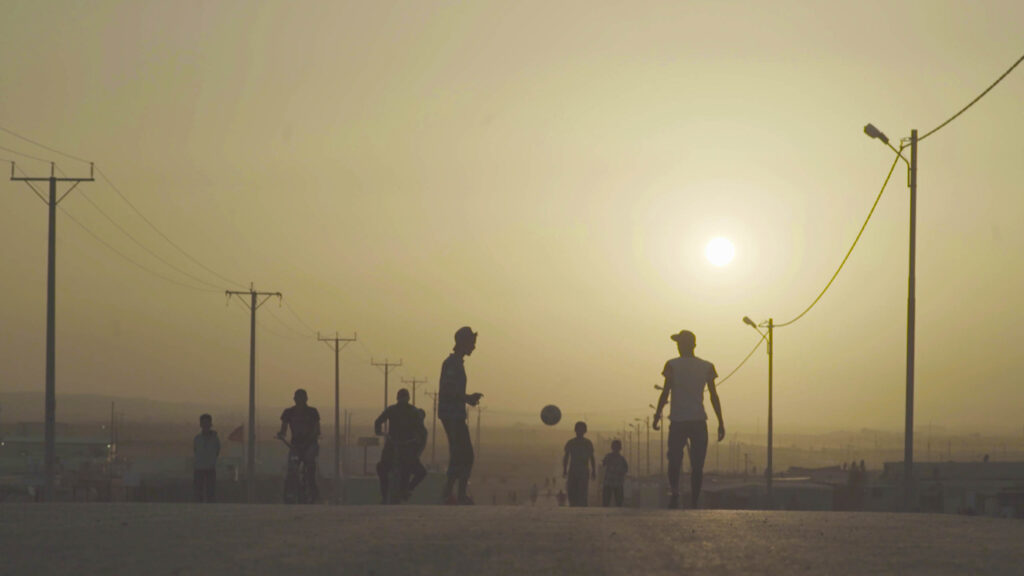 A still from Captains of Zaatari by Ali El Arabi, an official selection of the World Cinema Documentary Competition at the 2021 Sundance Film Festival. Courtesy of Sundance Institute.

The timeless question, “What do you want to be when you grow up?” is presented to us as children countless times before adulthood. The answers rarely reflect the reality of the job market, nor do they need to. No one needs to dream of being an accountant from an early age to live a happy life. To want to be a superstar athlete is a natural desire.

The documentary Captains of Zaatari challenges this notion from a unique perspective. Set in the Zaatari refugee camp in Jordan, home to tens of thousands of Syrians forced to flee their war-torn homeland, the film follows two teens, Mahmoud and Fawzi, as they hope to leverage their soccer talents for a chance at a better life. A visiting soccer academy presents the chance to make that dream a reality, offering a glimmer of hope in a community desperate for some positive news.

What’s most impressive about director Ali El Arabi’s work is his gift for presenting a universally relatable story that transcends any language or cultural barriers. The hardships that come from living in a refugee camp, in what look like converted shipping containers, are not the kind of struggles that most international viewers will have any firsthand experience with. El Arabi doesn’t focus on the state of the region’s geopolitics, but rather the plight of his teenage subjects, the kinds of conversations you might hear in any high school corridor.

The film does a great job setting the scene in the camp, showcasing the boys’ families, loving parents who want to temper their sons’ dreams of becoming the next Christiano Ronaldo. Refugee camp or not, life moves forward. Education is important for anyone, a reality that their parents try to remind the kids of as they follow their dreams.

Filmed over a six year period, Captains of Zaatari comes together when the boys travel to Qatar for a tournament. One of the most subtle, harrowing moments, comes from a remark that this is the first time that the athletes will be competing with cleats, often depicted playing barefoot. Televised to their families back home, El Arabi captures a moment of triumph that puts the pursuit in perspective. We don’t know what the future will bring for Mahmoud of Fawzi, but it’s quite inspiring to see the power that the game has had on their lives play out in real-time.

Perhaps most impressive of El Arabi’s achievements is his ability to present this touching narrative with only a seventy-three minute runtime. Captains of Zaatari is a testament to the power of passion to shine a light in darkness. These families lost so much when they were forced to flee Syria, unthinkable horrors. It is quite inspiring to see their perseverance, aided not only by the love of a game, but the hope of a brighter tomorrow.