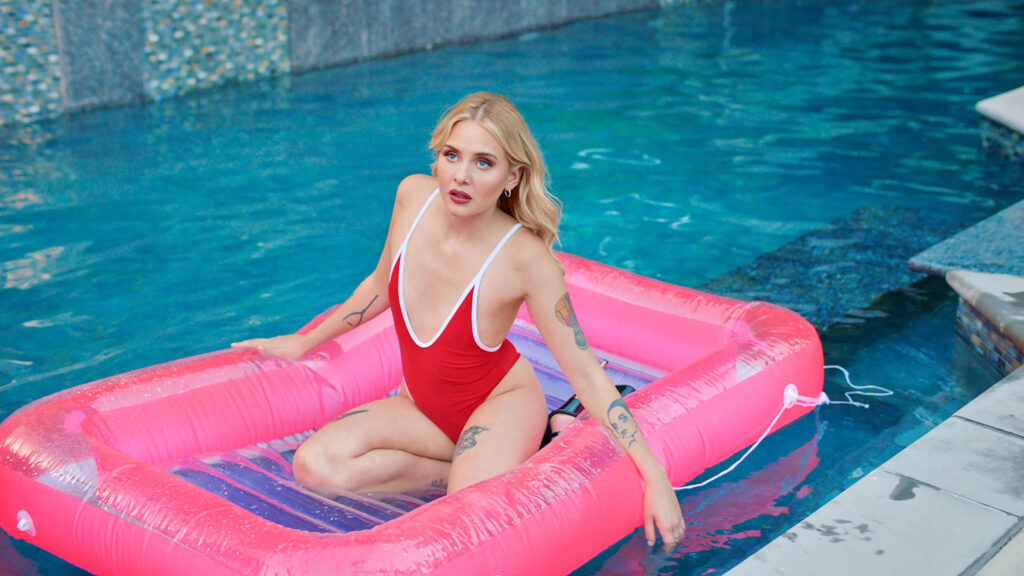 Sofia Kappel appears in Pleasure by Ninja Thyberg, an official selection of the World Cinema Dramatic Competition at the 2021 Sundance Film Festival. Courtesy of Sundance Institute.

Those who work in the adult film industry are often asked a simple question not imposed upon plenty of other professions. Why? The implications of the question are simple enough for anyone to recognize. Adult films are often seen as unsavory to the public, a multi-billion dollar industry perpetually seen as taboo even as its place in popular culture has inched closer to mainstream acceptability over the past few decades.

Director Ninja Thyberg spends most of Pleasure grappling with an early question posed at customs when Bella Cherry (Sofia Kappel) lands in Los Angeles. Business or pleasure? Bella is a bit of an enigma, a loner with a lot to learn about her newfound profession.

Thyberg, on the other hand, demonstrates an intimate knowledge of her subject matter. The great triumph of Pleasure is the methodical way with which she explores the adult film industry, its inner workings, and the often-scummy figures who control the puppet strings. Few fictional narratives leave such a powerful impression as having so earnestly tried to deliver a faithful depiction of their material.

Kappel is a commanding presence in the lead role. Bella may be an amateur, but Kappel shows off her talents through her character’s constant struggle for a sliver of agency. Other characters know their places in the industry, but Bella never loses sight of the bigger picture.

For all the obvious deliberation that went into the worldbuilding, Thyberg’s script hinders Bella in a way that Kappel’s performance can’t completely overcome. We see Bella face plenty of hardships, abusive shoots filming hardcore scenes, as well as some triumphs. What’s missing at the center is a sense of understanding for why Bella sought out this impression in the first place.

Thyberg plays with the question first posed to Bella, business or pleasure, but it’s never really clear if she even likes this line of work. Others in her orbit clearly do, working hard on their followings and desperate to please those who can make their dreams into a reality. Bella lacks that similar sense of drive, claiming to be special but failing to deliver on those lofty standards.

That narrative is hardly Pleasure’s only concern. The film showcases the rampant industry sexism alongside the ways that women tear each other down to get ahead. Thyberg crafts a beautifully shot film, even if it’s hard to shake the idea that Bella isn’t terribly invested in her own success.

Pleasure is a worthwhile endeavor. Thyberg makes the most of the 106-minute runtime, thoroughly exploring the ins and outs of the industry in a way that never comes at the cost of the story she’s trying to tell. With Kappel possessing such a firm command over the lead character, it’s a shame that the film doesn’t deliver the knockout punch it’s clearly capable of achieving. A film this well-made should leave its audience feeling far more satisfied by the time the credits roll.