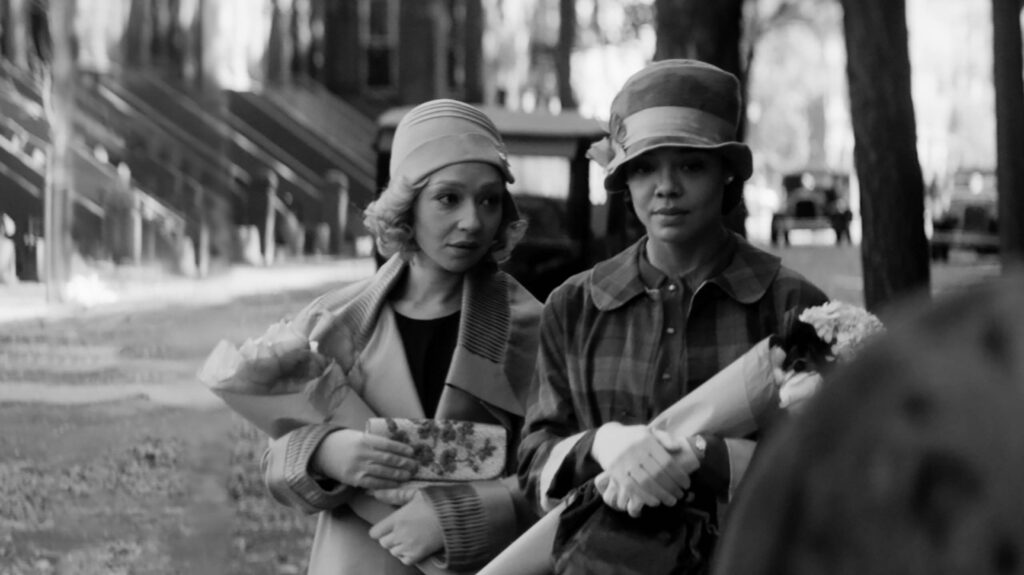 Ruth Negga and Tessa Thompson appear in Passing by Rebecca Hall, an official selection of the U.S. Dramatic Competition at the 2021 Sundance Film Festival. Courtesy of Sundance Institute | photo by Edu Grau.

Part of the magic of watching modern period dramas is the way the set design and production values work together to transport the audience back in time. With Passing, director Rebecca Hall seems far more concerned with the feel of the era she depicts rather than simply the look of 1920s New York. Confining her narrative to the old-school 4:3 aspect ratio, shot using black-and-white cinematography that gives off a saturated feel, Hall ensures that her audience engages with the material on her terms.

An adaptation of the 1929 Nella Larsen novel of the same name, Irene Redfield (Tessa Thompson) is caught between two worlds. Harlem is her home and her community, a part of New York full of excitement for the future and all its possibilities. Downtown possesses all the irresistible glamour, a culture built on exclusivity. Between its fascination with old money and straight-up racism, Irene can visit its streets, but there remains the sense that no matter what, she’ll never fit in.

A chance encounter with a childhood friend, Clare (Ruth Negga), causes a drastic shift in Irene’s perception. Clare “passes” as white. Her racist husband, John (Alexander Skarsgard), has no idea that his children are half-black. The possibilities presented by this hiding-in-plain-sight level of stealth causes Irene to reexamine her own life choices, particularly her place in Harlem working for the Negro Welfare League alongside her husband, Brian (Andre Holland), a doctor.

Hall’s film is a mediative reflection on identity, propelled by superb lead performances and powerful cinematography. As Irene, Thompson shines through her subtle approach to her character’s broader desires. It’s not fully clear what Irene wants out of her life, but you get the sense that she’s trying to figure it all out in real-time.

Negga provides a valuable contrast, a woman firmly in command of her own life circumstances. In an era shamefully defined by limited opportunities for people of color, Clare enjoys luxury and stability. Hall asks no one to agree with this decision, a judgment-free approach to complex themes.

The script is a bit light on conflict. There’s a sense of reservation that fits well with the stakes at hand, but Passing does feel like Hall left quite a bit on the table. The film starts to drag a bit in the third act, repeating some of the same patterns until it’s time to set up the main conflict. Hall sticks the landing, but it’s one of those conclusions where you wish that there had been more time to process it all.

Passing is a strong showing from Hall in her debut effort. The script isn’t exactly a knockout the whole way through, but the acting and cinematography pick up the slack where the narrative lags. Few period dramas wield their own aesthetics in such an effective manner.