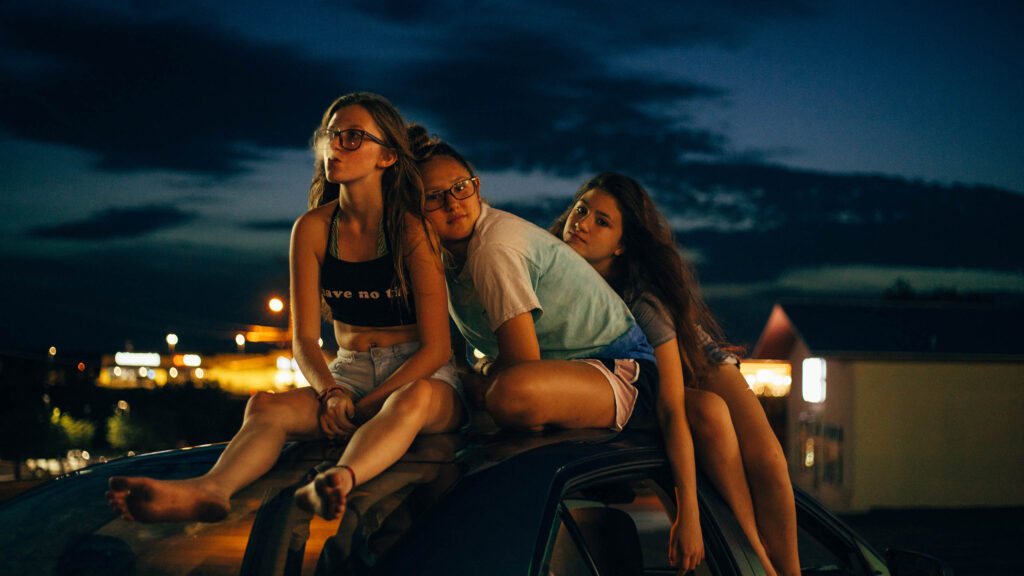 A still from Cusp by Parker Hill and Isabel Bethencourt, an official selection of the U.S. Documentary Competition at the 2021 Sundance Film Festival. Courtesy of Sundance Institute.

The advances in technology can suggest a kind of barrier between the struggles that modern teenagers face and those of us who came of age before TikTok and Instagram ushered in the era of perpetual connectivity. Directors Isabel Bethencourt and Parker Hill quickly dispel that notion as a piece of fiction. Thoroughly set in the present day, Cusp reveals layers upon layers of teenage angst, showcasing a degree of universality with regard to this awkward era of people’s lives.

The film follows a trio of girls, Brittney, Aaloni, and Autumn, over the course of a summer in a small Texas town. There’s nothing to do but hang out aimlessly, drinking, smoking, and snorting coke. Normal 15-year-old activities. Caught in a kind of limbo between adolescence and adulthood, limited freedoms within a world still governed by their parents, these girls make the most of their time simply by spending it in each other’s company.

Referring to a work as remarkably mundane suggests a kind of insult, but the descriptor seems oddly fitting for the directors’ intentions. Bethencourt and Hill perfect a technique where their subjects seem barely aware of the cameras at all, a rare triumph in filmmaking. Likely desensitized by years of smartphone addiction, the teens really do go about their business as if there was no one in the room filming them.

That kind of mastery makes it easy to hop on board with Cusp’s intentionally meandering narrative, where nothing really happens. One can imagine there are reams of footage of even more mundane activity or early days where the teens may be phased by the cameras documenting their every move. Bethencourt and Hill’s deliberate curation works quite well toward its objective of capturing this fleeting era of teenage life.

Much of it is hard to watch. While it’s easy to be amused by a kid smoothly cutting lines of blow, himself obviously charmed by the camera following along as this minor shares his very illegal plunder, other sequences are bound to make anyone feel uncomfortable. A sequence where one of the girls fights with her father over his callous treatment of her sibling on their birthday heightens the sense of powerless that many feel at this age. You’re old enough to drive a car, but your dad can still make you change a top he doesn’t like.

Bethencourt and Hill take great care with regard to some of the film’s heaviest subjects. The effects of PTSD on veterans and their families are presented in a raw and deeply moving manner. One of the subjects almost nonchalantly recounts how she was molested by a close friend of her father’s. The girls possess a keen understanding of consent and the distance between one’s broader perception of the concept, and the reality of the world they live in.

In other instances, mountains are crafted out of molehills. Teenagers cry over broken hearts, failed relationships they’ll probably laugh about in a year’s time. Bethencourt and Hill expertly capture the zeitgeist of teenage existence. Everything feels like the most important thing in the world, at least until the next party comes along.

Cusp finds deep meaning in the act of hanging out. The kids are rarely far apart from their smartphones, but at least they’re doom scrolling together. Through their exceptional work Bethencourt and Hill reveal a kind of universality to teenage life. It’s not an easy time to be alive, spending your days with the knowledge that you’re on the cusp of something bigger.