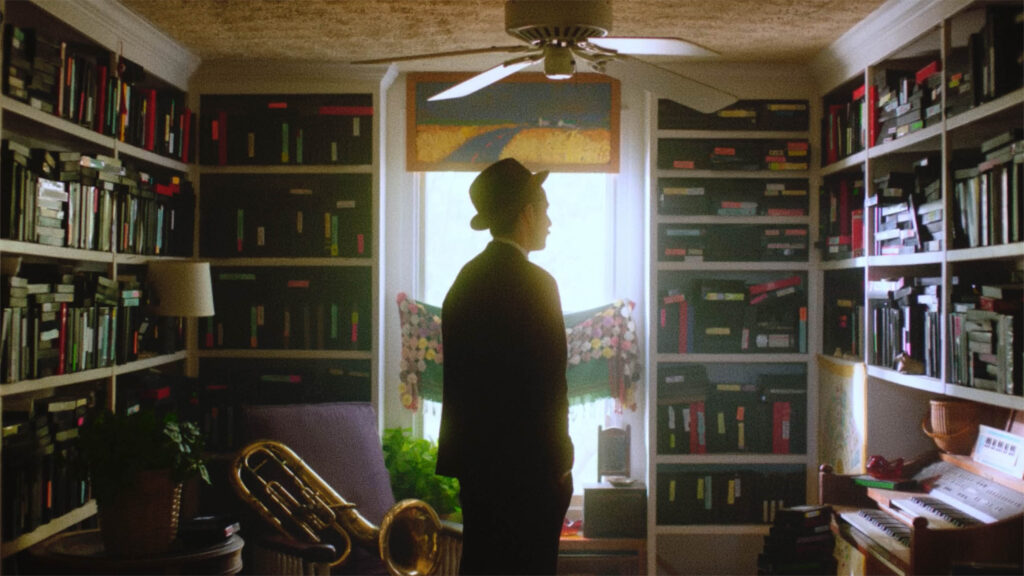 Kentucker Audley appears in Strawberry Mansion by Albert Birney and Kentucker Audley, an official selection of the NEXT section at the 2021 Sundance Film Festival. Courtesy of Sundance Institute | photo by Tyler Davis.

Social media has commoditized our daily lives in a way that no one should be completely comfortable with. Whether you choose to post pictures of your lunch on Instagram every day or not, the world has transformed into a place where that rather mundane action carries the perception of value in our broader consciousness. There is nothing that needs to be private in a world where anything can garner a “like.”

Strawberry Mansion takes place in the not-too-distant future, a world where dreams are recorded on VHS tapes for tax purposes. James Preble (Kentucker Audley, who also co-directed the film with Albert Birney) visits the quiet home of Arabella “Bella” Isadora (Penny Fuller), an elderly artist, to conduct an “audit” of her dreams to render unto Caesar what he’s owed. James quickly finds himself charmed by Bella’s hospitality, sparking romantic feelings between the two that transcends time and space.

Audley & Birney’s worldbuilding works on just about every level, crafting a charming, full-bodied space for their whimsical adventure. The color palette mesmerizes the eyes while the work of composer Dan Deacon supplies a steady stream of electronic beats that help anchor the mood. The retro-futurism is pretty believable for our nostalgia-obsessed timeline.

Audley also excels in the lead role, possessing a subtle sense of confidence and curiosity as the humble tax collector. Loneliness brings James and Bella together, but there’s an organic chemistry driving the two to seek companionship in one another. The world deals its cards, but we all have agency to choose what to do with our hands, a foreign notion to James in his role as a professional observer.

The intergenerational romance is refreshing, demonstrating love’s ability to transcend common stereotypes toward age-gaps that we see both in society and film Audley has great chemistry with Fuller, as well as with Grace Glowicki, who portrays a younger Bella in some of the film’s dreamier sequences. There’s a natural sense to their affection that provides a refreshing contrast to the gloomier reality of the world they inhabit, something undoubtedly relatable to many of the viewers.

The themes that Strawberry Mansion spends much of the second half of its ninety-minute runtime focusing on pretty heavy issues that philosophers have spent centuries grappling with. There aren’t easy answers here. Audley & Birney never try to pretend otherwise, instead celebrating the joys that come about through the pursuit of those nuggets of wisdom we hope to discover along the way.

It’s easy to see dystopia in the film’s commoditized world. The thought of dreams being mined for taxation value is bound to be uncomfortable for many, including the protagonists. Strawberry Mansion never lets itself become consumed in the endless churn that social media produces, spiking anxiety and depression levels in much of the population. It’s a deeply optimistic narrative that finds beauty in life, the idea of a moment that belongs to you and no one else.

Strawberry Mansion offers the perfect antidote to our beleaguered reality. It is both easy and understandable to be depressed by the world, especially the ways we have become intrinsically linked to our devices. The world is a messed up place.

Art doesn’t necessarily have an obligation to bring hope to counter that rather reasonable notion. Audley & Birney made a pretty compelling case for the wonder of life. True connection is rare, a bizarre irony in this age where we can live our entire lives online. Strawberry Mansion gives a glimpse of a world where we can appreciate the fleeting moments, the ones that don’t last forever on your camera roll.