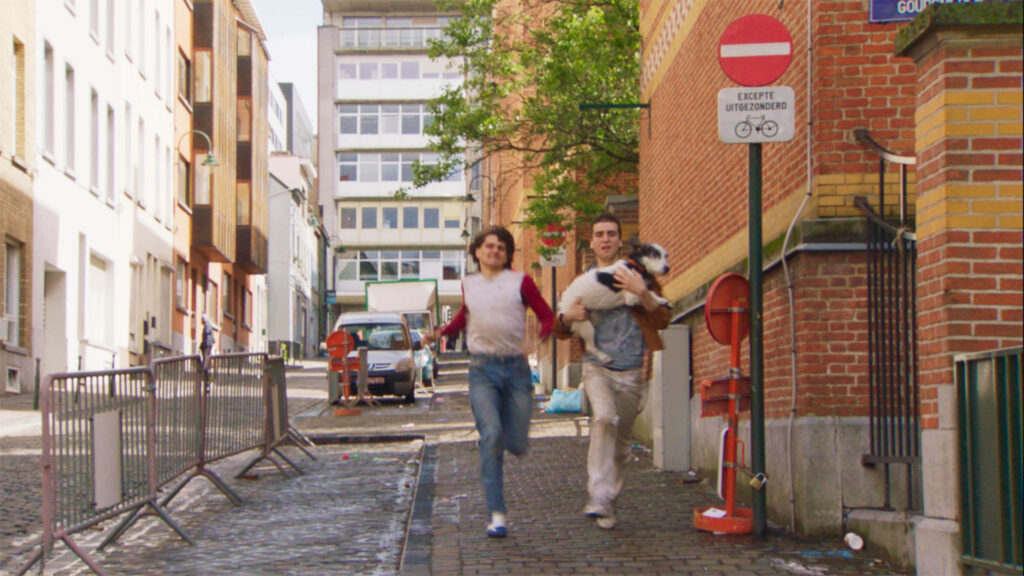 Maxi Delmelle and Harpo Guit appear in Mother Schmuckers by Lenny Guit and Harpo Guit, an official selection of the Midnight section at the 2021 Sundance Film Festival. Courtesy of Sundance Institute | photo by Sylvestre Vannoorenberghe.

Comedy does not need to achieve more than its obvious primary objective of making people laugh. Seinfeld found global success with its “no hugging, no learning” mantra. As a film, the Belgian-produced Mother Schmuckers delights in crafting a hilarious narrative that’s heavy on laughs and light on anything resembling character growth.

The film follows brothers Issachar (Maxi Delmelle) and Zabulon (Harpo Guit, who also co-directed the film with his brother, Lenny), who live with their mother, Cashmere (Claire Bodson) in a run-down apartment. The brothers are pretty hapless, completely governed by their own primitive instincts. Issachar and Zabulon are the kind of people you’d avoid if you saw them on the street, the kinds of characters that would make one want to move away if you discovered them in your building.

As a narrative, Mother Schmuckers has less of a plot than an organized sequence of events. Issachar and Zabulon are hungry and need to find their dog, January Jack, before their mother gets even angrier with them. The search for January Jack takes them all across their city, meeting a horde of characters as unsavory as the brothers.

Mother Schmuckers offers pretty much non-stop laughs for the entire runtime, an impressive feat for the Guit brothers. There’s an endearing quality to Issachar and Zabulon that makes no sense, two absolute idiots. The humor translates quite well from its French language, aided by Delmelle and Guit’s talent for physical comedy. Perhaps the only drawback is that it can be hard to read the subtitles with so much laughter.

The film’s seventy-minute runtime is one of its best assets. Mother Schmuckers cares nothing for character development or any kind of plot besides the leads being hungry and in search of their dog. That’s a tricky dynamic for a film to tackle, something that the Guit brothers manage masterfully, but part of that skill lies in their ability to know when to call it a day.

Mother Schmuckers is a celebration of laughter as an artform, pure joy from start to finish. One does not necessarily look at toilet humor with the same critical lens as a work of Monet, for obvious reasons, but it would be unwise to discredit the value of the strong emotions that the film manages to evoke. Film exists to make us feel. This film will make you feel really, really good.

The film probably carries the most appeal for fans of films like Jackass or The Hangover. Hardly for the faint of heart, the Guit brothers pieced together an impressive narrative that succeeds solely on the strength of their ability to garner laughs. One of those films that makes you marvel at the form, reminding its audience of the sheer ability for art to inspire such pleasurable emotions for an extended period of time.