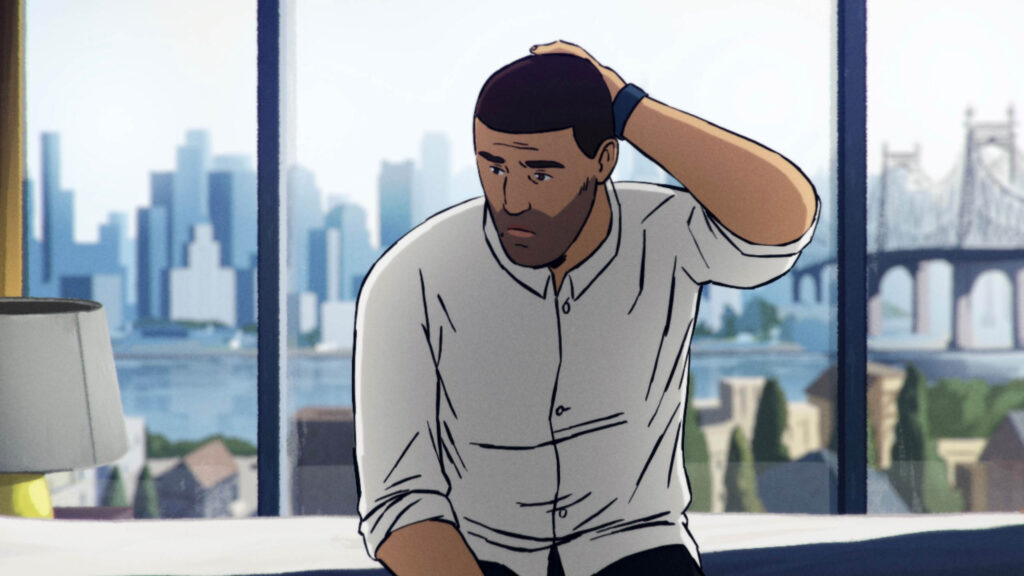 A still from Flee by Jonas Poher Rasmussen, an official selection of the World Cinema Documentary Competition at the 2021 Sundance Film Festival. Courtesy of Sundance Institute.

The terms through which the film Flee engages with its subject shines a spotlight on the countless voices that won’t be heard at it. Filmmaker Jonas Poher Rasmussen illustrates the story of an anonymous Afghan refugee, presented as Amin Nawabi in the narrative, who he befriended growing up in Denmark. To protect Amin’s identity, Rasmussen uses animation to bring Amin’s story to life, a novel approach that’s as haunting as it is powerful.

Through a simple 2D palette, Rasmussen manages to capture the power of Amin’s narrative without losing any of the emotion that his real face might be able to provide. Amin’s voice speaks volumes alone. A skilled storyteller, Rasmussen quickly dispels any apprehension that the audience may have toward his fairly novel approach, a bit of humor in the form of an 80s pop music homage to bring some early levity.

Amin has lived an incredibly tough life. Forced to flee Afghanistan at an early age, his family was stranded in Russia, relying on an older brother, who had escaped early to avoid being drafted into the army, for money. The complex geopolitics of the late 1980s made travel difficult, forcing the family to rely on shady human traffickers to gradually smuggle their family out of Moscow.

Rasmussen’s grasp of pacing is exceptional, portraying the agony of waiting that Amid and his family experienced through their years in Moscow, under constant fear of further deportation and imprisonment. The film hammers home the brutality and cruelty, which never loses its impact across the eighty-three-minute runtime.

The animation continuously enhances the narrative, especially during its bleaker moments. Rasmussen constantly plays with the color scheme, introducing shades of black, white, and grey that captures the anxiety of that period in Amin’s life. The film occasionally includes archival news footage, providing a fuller context for the audience’s understanding.

Flee blurs the lines between documentary and biopic, a relentlessly haunting masterpiece by an extremely innovative filmmaker. At times, Amin is understandably drained, reluctant to share his traumatic story. The animation clearly takes some artistic licenses, it would have to, but it never feels like it’s operating on a different wavelength from his subject. Rasmussen compiles it all so beautifully.

Amin’s homosexuality serves as an anchor throughout the film. Rasmussen includes some contemporary animation featuring Amin’s occasionally strained relationship with his partner, Kasper, exacerbated by his anxieties toward settling down and buying a home. You get the sense that by opening up to Rasmussen, Amin finds some therapeutic value that helps him come to terms with all that’s happened in his life.

The inclusion of the contemporary narrative also firmly grounds the film as Amin’s story. The hardships of his life are undoubtedly similar in nature to countless other refugees, many of whom weren’t able to escape the horrors of war. Flee connects on a universal level, illustrating the injustices of the refugee system, while also maintaining a deep sense of intimacy between the audience and its subject. Without ever showing his face, Amin bares his soul for the world to see. Rasmussen’s grasp of storytelling is absolutely exceptional to experience.