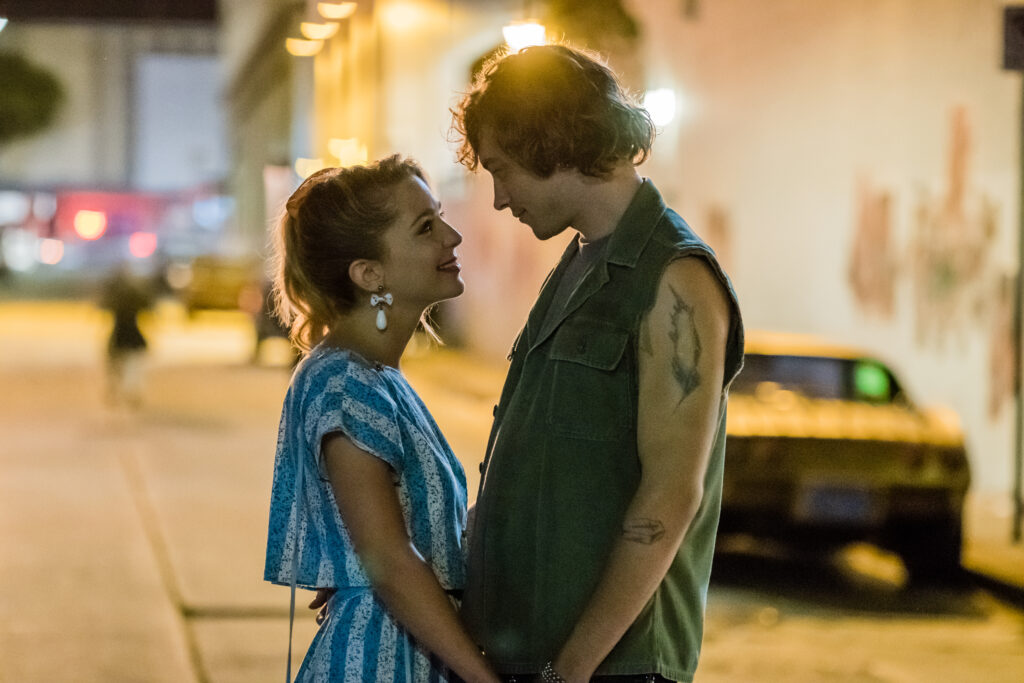 A film like 1983’s Valley Girl seems an obvious choice for the remake treatment. Somewhat complicating that proposition is the idea that practically every 80s homage that’s been crafted in the decades since its release has at least in part borrowed from the classic teen comedy. The 2020 version of Valley Girl is tasked with not only adapting its source material, but also distinguishing itself in a crowded very space.

The bulk of the 2020 Valley Girl is told via flashback, as an older Julie (Alicia Silverstone) fondly reflects on her younger self’s (Jessica Rothe) high school days, hanging out at the mall and practicing aerobics with her friends. With her daughter deciding between an abroad trip to Japan and the boy she’d be leaving behind, the 80s serve as a backdrop for Julie to demonstrate that she’s not as dated as some of the “Valleyspeak” the region popularized.

The big distinguisher between the remake and the original is the presence of many elaborate musical numbers set to covers of 80s classics such “Kids in America” and “I Melt with You.” Choreographed by Mandy Moore, the sequences work pretty well, even though the covers are pretty terrible, the kind of stuff you’d hear on Kidz Bop. The film makes practically no case for why the music should be there, except in the sense that it’s fun to see people dancing in vibrant colors.

A refresher on the derivative nature of the original Valley Girl’s narrative, which borrowed heavily from Romeo & Juliet might be helpful going in to the 2020 version. Remake or not, Julie falling for a guy, Randy (Josh Whitehouse), her parents don’t approve of is a fairly generic plot. Rothe and Whitehouse have pretty good chemistry, a romance that is more satisfactory than compelling.

Putting aside the fact that none of the cast look young enough to be in high school, they’re quite entertaining to watch. As Julie’s friend Stacey, Jessie Ennis gets the most time to shine out of the supporting bunch. Mae Whitman is a bit overqualified as Randy’s bandmate, but makes the most out of her limited screen time.

The big casting disappointment is Logan Paul, tasked with the role of antagonist as Julie’s jock boyfriend Mickey. Paul’s detestable public makes him perfect for the role of loathsome blowhard, but he’s simply not a very good actor. For the most part, Paul fails to make an impression, a missed opportunity for a bit of self-deprecation.

Valley Girl treats the 80s like an Instagram filter, a film without a single drop of originality. An unapologetically fun guilty pleasure that’s pretty perfect for light summer fare. People who actually grew up in the 80s will likely hate the tropes the film traffics in, but it’s pretty clear that this remake is designed more for millennials, the kind of people who knew who Logan Paul was before he started getting in trouble on the news. The presence of Silverstone, a 90s teen icon, probably doesn’t help much either, though she’s very fun in a bit role.

The 80s aesthetic also provides an unintended benefit. Set in an idyllic period before cell phones, Valley Girl doesn’t need to work social media into its narrative. Few films understand that less is more with regard to portraying technology on screen. Valley Girl feels distinctly modern in its delivery, a trait bound to anger nostalgic viewers but one that ends up working pretty well for a young audience. For a film using bright spandex and catchy covers to masquerade as a period piece, Valley Girl is actually a lot of fun.