The Mandalorian Season One Review: Chapter 5 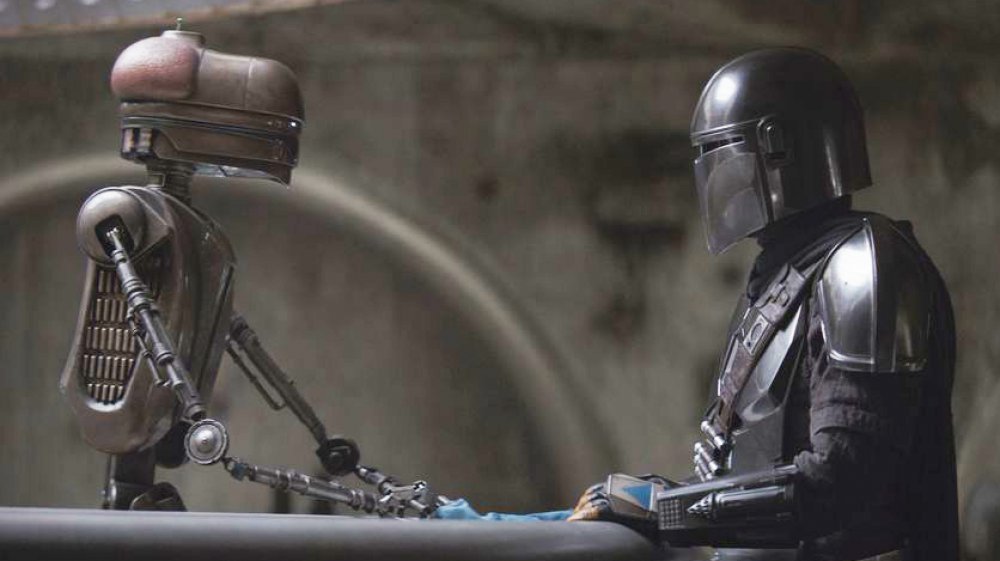 Part of what made last week’s Chapter 4 such a great episode was the simple fact that the show had finally left its initial planet, which we now know is called Navarro. Plenty of recaps, including this one, wondered if that planet was Tatooine, owing to the desert climate and presence of Jawas. “Chapter 5” features the Mandalorian and Baby Yoda arriving on Star Wars’ most iconic planet, a moment that felt weirdly robbed of its potential impact.

There’s a running joke in the Star Trek fandom that revolves around how there’s seemingly endless planets in the universe, but they all look like the same pile of rocks. Obviously there’s a reason for this. Sets are expensive and deserts are easy to create. The Mandalorian is an expensive show, with episodes costing upwards of 15 million dollars apiece to make.

From an audience perspective, cost is a difficult thing to gauge. Shows like Game of Thrones and The Crown clearly look expensive due to their lavish sets and costumes, something that certainly holds true for The Mandalorian. With episode runtimes that barely go beyond a half hour and a palette of monotonous desert landscapes, it can be sometimes hard to be all that impressed with the scale of this show.

Chapter 5 – The Gunslinger further solidifies The Mandalorian as “The Baby Yoda Show.” Each episode feels fairly self-contained in nature, focusing on either protecting the adorable baby or fixing Mando’s ship. For now, that formula has generally produced satisfying television.

This episode felt fairly small in nature. Perhaps some of that has to do with the empty Mos Eisely Cantina, which now allows droids. We see a cute R5 unit inside, along with a bartender who looks like EV-9D9, who worked in Jabba’s palace overseeing the torture of other droids.

The pit droids that worked for Peli Motto were a nice throwback to The Phantom Menace, though it’s unclear why The Mandalorian wouldn’t let them work on his ship. Similarly implausible is the idea that he’d leave Baby Yoda on the ship alone.

There had to be some level of trust toward Amy Sedaris’ Peli Motto in order to leave him there in her general vicinity, but it doesn’t make a ton of sense. This situation does lead to Peli asking her droids to fetch Baby Yoda something to eat, an adorable sequence. A spinoff where Peli simply babysits Baby Yoda would totally work.

Toro Calican is a strong contender for worst character of the season. Jake Cannavale does a decent job with the arrogant wannabe bounty hunter, but he’s an annoying character. That might explain why Mando decided to toss over his binoculars to the Tusken Raiders instead of simply shooting them, an approach he took with the Jawas back in Chapter 2. Thankfully we won’t have to see any more of Toro moving forward.

Fennec Shand is a character who will likely be quite important to The Mandalorian moving forward. For now, this was a fairly weak introduction. Mando and she clearly have a lot of history, but Toro’s presence in the narrative hindered any exploration of this dynamic. Ming-Na Wen was fun to watch, but this episode didn’t really give her any time to shine.

Does anybody on Tatooine need water? It’s a desert planet with two suns, yet Mando and Toro were all too content to sit outside all day in the sun with no shade, and no Camelback. Maybe Mando’s helmet has air conditioning.

This episode had a lot of fan service. From the mention of Coreillian-quality ships to Mando’s “no good to us dead” line, a throwback to Boba Fett in Empire Strikes Back, some were quite easy to pick up on. Most impressive was when Toro remarked, “Who wouldn’t want to be a legend?” to Shand, quite likely a reference to Ming-Na Wen’s status as a Disney Legend.

Chapter 5 was easily the weakest of the show, an episode mostly salvaged by Amy Sedaris’ lively performance. Her relationship with Mando felt oddly organic for the small amount of time they’d spent together, and her affection for Baby Yoda was palpable. It’s too bad she couldn’t join Mando for the rest of the season.

The end of the episode hinted at what’s in store for the remaining three episodes, with an unknown figure approaching Shand out in the desert. It seems likely that this person is Giancarlo Esposito’s Moff Gideon, who was announced for the season but hasn’t appeared yet. After a collection of mostly self-contained episodes, hopefully we’ll see a villain who sticks around for a while. This show can’t rest on Baby Yoda’s laurels forever.

Grab your motorcar and the deed to Toad Hall, we’re going a merrily journey to nowhere in particular. Join Ian & Tarabelle for an in-depth discussion of Mr. Toad’s Wild Ride, the most idiosyncratic and wonderful attraction in Disney Park history. While The Adventures of Ichabod and Mr. Toad served as a loose adaptation of The Wind and the Willows, Mr. Toad’s Wild Ride largely abandons any connection to its source material.

From Toad Hall to Hell, Ian & Tarabelle cover the ride in all in iterations including the original 1955 version and both tracks at Disney World, where it lived in a certain silly old bear took over in 1998. We love Pooh, but it’s okay if you’re still a little angry about the whole situation.

For more Disneyland fun, check out our three part series ranking every ride at Disneyland, as well as our episode covering Galaxy’s Edge.

For more Mr. Toad, check out Ian’s Instagram, where she obnoxiously posts pictures with Mr. Toad for every single visit.