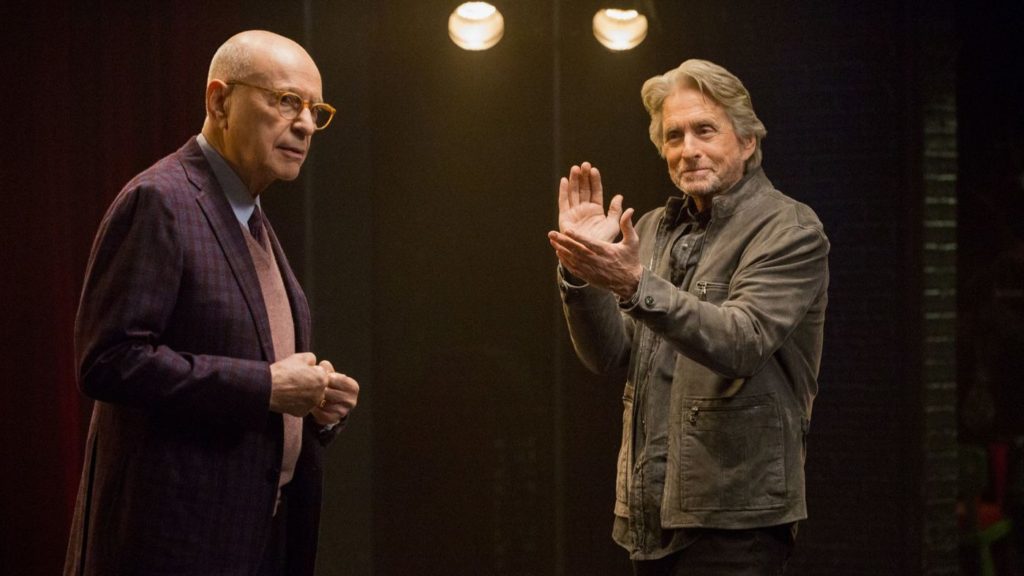 The opening scene of The Kominsky Method throws a nod to non-binary people, an inclusive tone contradicted a few minutes later when Michael Douglas’ title character holds an embarrassing public inquisition to his acting class over feminine hygiene products clogging his studio’s bathroom. This contrast embodies the struggle at the heart of the show, acutely aware of the era it occupies while unable to resist the low-hanging fruit of sexist toilet humor. Quite unsurprisingly, The Kominsky Method is exactly what you’d expect if you asked someone to dream up what a Chuck Lorre take on Grace & Frankie might look like from a straight man’s perspective. The result is a pathetic attempt to sound intellectual while offering little other than the basic novelty of watching Michael Douglas interact with Alan Arkin in the comfort of your own home.

The Kominsky Method is ostensibly a show about aging. Douglas’ Sandy Kominsky is a moderately successful acting teacher who dates his students even though he’s demonstrably aware that such behavior is hardly acceptable in the #MeToo era. Arkin plays Norman Newlander, his agent who spends much of the season grieving his wife, who dies early on in the series. The show chooses a grand life question to ponder in each episode, picking at it like an unwanted salad that comes with your meal, something that doesn’t need to be seen to completion.

Occasionally, The Kominsky Method hints at modern culture, like political correctness, as if it wants to say something meaningful about the nature of humor in an era where marginalized people are allowed to publicly object. Problem is, the show really doesn’t have anything to say besides a snippet of commentary one might pull from a segment on Fox News. It never commits to any particular direction, particularly on display with the handling of Newlander’s wife, whose terminal illness is originally exploited to further Komsinsky’s romantic storyline before becoming the main plot driver for the next few episodes. The show is desperate to sound insightful, but it can’t seem to make anything out of the scenarios it forces its characters to play out.

The Kominsky Method isn’t so much bad as it is simply not good, relying extensively on the name recognition of its stars to substitute for an indecisive narrative. The entire show is constructed similarly to a scene that might be performed in an acting class, an incomplete scenario used to showcase the talent of the actors. Douglas and Arkin are talented, but this was a given already. The show is far too content to coast along on their abilities.

Part of what makes Douglas such a charm in recent movies such as Ant-Man and the Wasp is that he genuinely looks like he’s having fun. His own enjoyment is less convincing in The Kominsky Method, like a college freshman out of a place at a foreign film screening where they don’t understand the jokes. The Kominsky Method doesn’t really have jokes, but rather things to smile at occasionally if for no other reason than to simulate the concept of enjoyment.

The Kominsky Method is very watchable television, but it’s an empty experience once one moves past the novelty aspect. The beauty of television is that the viewer isn’t necessarily required to do that. A person can sit down and enjoy two actors working off each other in the latter stages of their careers, but the experience could have, and should have, been so much more. The Kominsky Method might be Netflix’s laziest offering that anyone would be expected to take seriously. The “peak TV” label is one handed out generously in this era, sometimes, sadly, to shows that expect it to be given as a birthright before laying down anything of substance to merit such praise.