Slamdance Review: Thunderbolt In Mine Eye 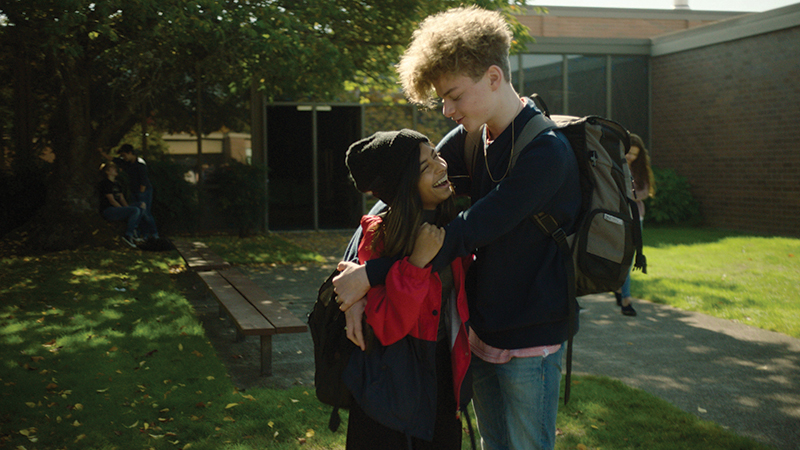 High school is a pivotal time for many American adolescents, a period when many experience their first whiffs of freedom outside their parents’ looming eyes. Young people’s initial tastes of sex, weed, and alcohol often leads to cringe-worthy memories, which some might say is an important part of growing up.

Thunderbolt in Mine Eye captures a first awkward first for two young high-school students. Harper (Anjini Taneja Azhar) is a freshman with a good group of friends and loving adoptive parents. She starts a relationship with her neighbor Tilly (Quinn Liebling), who’s also a close friend of her brother Adam (Alex Jarmon). The politics of teenage relationships naturally proves a bit troublesome for Harper, exacerbated by rumors that have a habit of finding their way through high school corridors.

The film does an excellent job of portraying a snippet of its character’s lives, representative of the era itself. Directors Sarah Sherman and Zachary Ray Sherman have a firm grasp of high school culture. One’s teenage years may be a formative time for many, but it’s by no means definitive. Young love rarely translates into lifelong love, nor does it need to.

What’s particularly impressive about the narrative is the realistic way it unfolds. The characters behave largely as you’d expect them to. As with any plot, some antagonists are required, mostly in the form of predictable nasty classmates, but the conflicts feel natural. If you neglect your friendships in favor of a significant other, you’re bound to get a bit of cold shoulder. That’s life.

The young stars are very talented. Azhar and Liebling have a natural sense of chemistry, highly believable in their puppy love. Both actors are quite gifted at drawing out quiet moments of brilliance in their scenes, comfortable in the awkward nature of many of the scenarios. The film recognizes that much of its audience has been in its characters’ shoes, not needing to oversell the emotion.

The film also deserves credit for keeping technology out of the narrative as much as possible. Phones are sadly a major component of high school life these days, a breeding ground for FOMO and its associated anxieties. The film includes a couple scenes of text messaging, but it stakes its ground in the humanity of its characters.

Thunderbolt in Mine Eye captures the spirit of teenage angst, a refreshing narrative that celebrates the subtleties of an awkward era. High school doesn’t have to define anyone, but in real time it often feels that way. The mature young cast are an absolute treat to watch. Sherman and Sherman have crafted quite an impressive film.