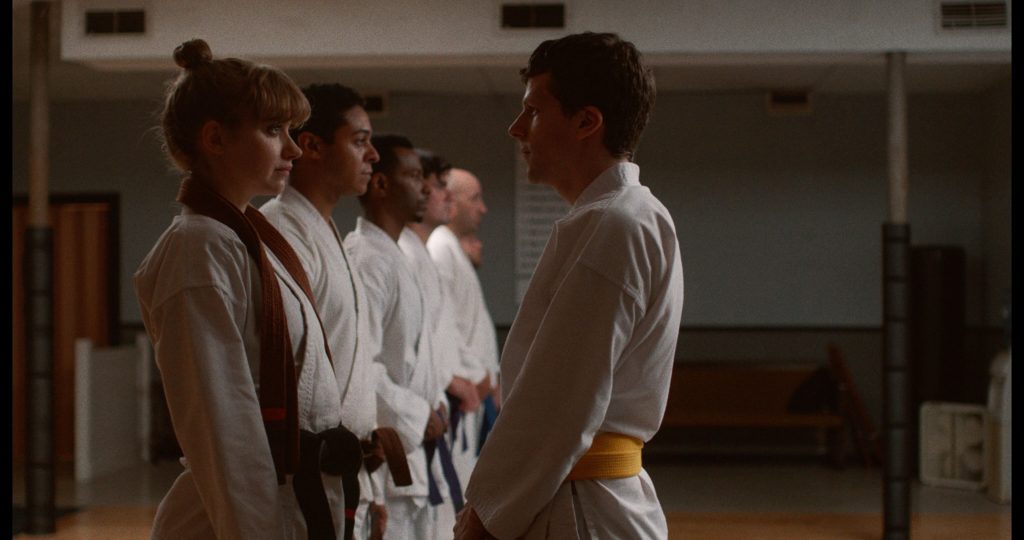 The past few years have shined a light on the notion of toxic masculinity, which has played a role in the formation of humanity since before recorded time. Countless think pieces have been written on “incels” and members of the alt-right in an attempt to get to the bottom of what it is that many men seem to fear in this changing world. As a period piece set in the 90s, The Art of Self-Defense isn’t really about the Trump era, but the present looms heavily over the narrative.

After a horrific mugging leaves him hospital bound, Casey Davies takes up karate in an effort to better protect himself against a world that doesn’t seem to have much of a place for him. He finds community in his local dojo that was absent from his workplace, where he struggled to fit in as an accountant. The real world has its unwritten codes, but the dojo offers a firm sense of structure through its list of rules up on the wall, a code for a soul in need of order.

At first glance, it’s hard not to do an eye-roll at the notion of Jesse Eisenberg playing yet another nervously awkward character. On the surface level, Casey isn’t much different from many of the roles he’s played over the years, but he works exceptionally well for what the narrative calls for. There are plenty of men out there like Casey expecting to be something they’re not, alpha men.

The Art of Self-Defense has an uncanny grasp on comedic timing, a film that makes you laugh out loud when you least expect a joke to come. Eisenberg works exceptionally well opposite Alessandro Nivola, who plays his sensei. The film uses its period setting to craft a kind of parallel reality that’s about as believable as it needs to be.

The film is a timely commentary on masculinity while existing completely outside the present. Director/screenwriter Riley Stearns crafted a narrative that could’ve been written twenty years ago, presenting issues not necessarily in a quest for answers, but to shed light on the destructive habits that society imposes on people who aren’t quite cut out to be macho. Men have been grappling with this dilemma for longer than anyone cares to admit and will likely continue to for the foreseeable future.

While the film excels at its commentary on masculinity, it often seems lost with what to do with Imogen Poots’ Anna, the most skilled student at the dojo. Anna thrives in the male-dominated environment, but the narrative doesn’t have much of a place for her, often squandering a fairly compelling character. The relationship between Casey and sensei makes up the bulk of the film, but it might have benefited from a broader approach to its supporting characters.

The Art of Self-Defense is a wild ride that constantly challenges any expectation one might have going into the film. Stearns crafted a singular world that’s a lot of fun to inhabit, never afraid to inject humor into unsettling themes. The film presents a fresh take on the kind of toxic masculinity that’s been around since the dawn of man, a feat that makes for a delightful summer cinematic experience.