The Ramifications of Jimmy’s Departure from Downton Abbey 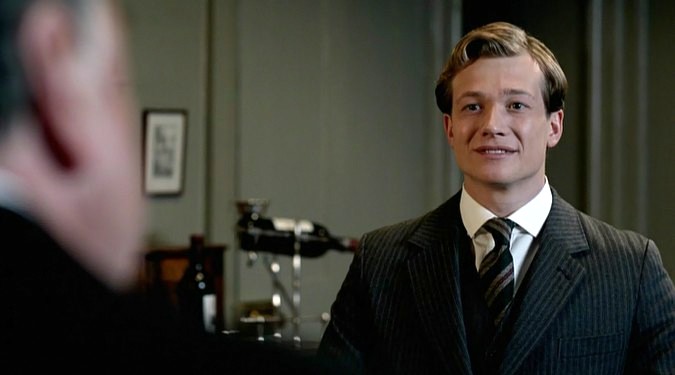 Note: I have seen all of series five of Downton Abbey, which has two more episodes to go in America. This article does not contain spoilers for those episodes. I recommend reading my article on the implications of Matthew’s death as there’s some overlap in subject matter.

At its core, Downton Abbey has always been about change. Lord Grantham, Lady Violet, and Mr. Carson fight this at nearly every corner, while many of the show’s other characters welcome it. As we’ve seen from five series that cover a twelve year time span, even the British aristocracy cannot escape change. For the most part, that’s a good thing.

The natural progression of this change is a shrinking servant staff as Earls learn to dress themselves and pour their own tea. Nearly every servant, young and old have explored this change in mentality as they ponder their places in the ever changing dynamic. Despite this, we saw the cast expand in series three with the arrivals of Alfred, Jimmy, and Ivy.

Seeing fresh faces at Downton coupled with the new aged business practices of Matthew and Tom breathed new life into the dynamic and suggested that Downton might be able to survive without sacrificing too much of the old world. Downton was hiring, not cutting back. Lord Grantham even created a new position for Thomas Barrow, creating the underbutler position to ensure that he could continue to be the man everyone loves to hate.

The youth movement was short lived. By the end of episode one of series five, Alfred, Ivy, and Jimmy were all gone. No new footmen were hired as Molesley was left to endure the wrath of Carson alone. The kitchen features the occasional character helping out, but Ivy was certainly not replaced from a storyline perspective.

This kind of makes sense. Alfred left to become a chef, aware that there wasn’t much of a future in the service industry for a footman. Seeing Molesley struggle to find work despite having experience as both a butler and a valet must have reinforced that. Ivy similarly jumped ship for a new adventure, traveling to America to serve Cora’s brother Harold. Jimmy was the only one whose departure wasn’t linked to the changing times, having been dismissed after being caught in bed with Lady Anstruther.

Alfred’s departure can be easily explained. He needed to go in order to make room for Molesley, who was without a position at Downton. Linking his leaving to the changing times was an added bonus. Ivy wasn’t exactly in a position where she needed to go, but it’s pretty clear that her character was expendable and likely a waste of screen time. She was boring.

The only departure that didn’t really have an obvious motive belongs to Jimmy. That’s not to say that there wasn’t one. Ivy and Alfred were the two characters he interacted with the most, but there was still Barrow, Daisy, and to a lesser extent Rose. Problem is, there isn’t a lot that could have been done with them from a storyline perspective.

I suppose Jimmy could have had a relationship with Daisy, but that wouldn’t have made much sense. A relationship with Rose would’ve been too similar to Sybil/Tom (not that Fellowes is against repetitive storylines). There are limitations for how much Jimmy could do with Barrow as well. It’s not really hard to see why he was viewed as expendable.

The implications of their departures seem to matter more than the loss of them as characters. Not hiring a new second footman means that Downton has cast aside formality for practicality. They didn’t need two footmen, but does that mean there shouldn’t be two footmen?

A side effect of their departure was that it removed Downton as a future centerpiece of prosperity. The young people moved on and the old people need to make arrangements for retirement. Daisy’s storyline has been all about this, undoubtedly provoked by the departures of her peers.

This is where I think getting rid of Jimmy was a mistake. Even if there wasn’t a clear storyline for him, he was still worth keeping around for the sake of appearances. He made Downton look like less of a retirement community.

Fellowes has had no trouble going long periods of time without giving characters like Patmore and the Bates anything to do. Instead of doing that with Ivy and Jimmy, he sent them away. In doing so, he cast a rather premature spotlight on the inevitable direction Downton is headed toward. We know what’s coming. We just didn’t need to see it this early.

Series 6 is widely considered to be the last for Downton Abbey. My next DA themed article will talk about why that’s a good idea, but it’s important to understand why losing Alfred, Ivy, and Jimmy made series 7 such an improbability. Killing the youth movement sped everything else up, a problem that will be further exacerbated by Rose’s presumed departure as the actress is filming Cinderella. There isn’t much else left to do but wrap things up. I’m not convinced that had to be the case all along.