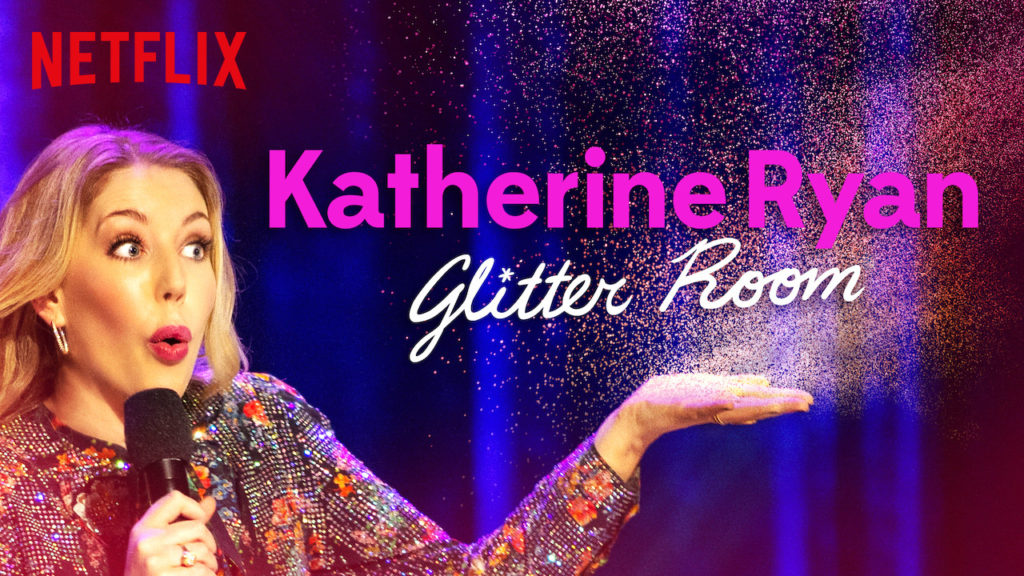 Part of the joy of watching Katherine Ryan perform is the way she tackles the current cultural climate surrounding men and comedy without sounding like she tailored her act to this particular era. Many of her observations about men in Glitter Room, her new Netflix special, could have been made twenty years ago. Ryan speaks not with vengeance about in the injustices brought to light in the #MeToo movement, but rather as a comedian staking her claim in the territory that men have felt comfortable in for decades.

The challenges of parenting as a single mother lie at the heart of Glitter Room. Ryan offers plenty of optimism for women in their thirties that their best days are still ahead. She takes on tropes like obnoxious school bake-sale organizers while staying above the fray of petty school politics herself. Her commentary feels more like an outside observer than an active participant.

The best jokes of the special tended to center around Ryan’s relationship with her daughter, particularly her position as a Canadian mother raising a child in London who is inevitably far more British than she could ever be herself. She’s an engaging storyteller who isn’t afraid to tell plenty of jokes that her daughter will potentially find cringe-worthy down the road. Glitter Room consistently presents as a portrait of her life at this moment, an intimate look at Ryan’s efforts to raise a child while still figuring things out for herself.

Ryan is quite an energetic performer with a keen ability to read a room. Glitter Room is one of the few stand-up specials to make audience interactions a highlight of the program instead of its weakest moments. Her engagements feel natural, enhancing her points while conveying the sense that she hasn’t just planned out each moment.

Some of the jokes do fall a bit flat, particularly when Ryan ventures into popular culture. She doesn’t have particularly anything original to say about the Kardashians, including a swipe at Caitlyn Jenner that felt a bit out of place in the year 2019. She also goes on an extended bit on Hamilton, which superfans of the musical might appreciate but started to feel more like inside baseball as the joke stretched on.

Glitter Room is a very entertaining special that delivers plenty of delectable one-liners. Ryan is a delight to watch with a delivery that feels organic and refreshing. She offers plenty to think about without concerning herself too much with the notion of any broader answer behind the meaning of life. The special had a nice way of making the future feel less about losing one’s youth and more about appreciating the days yet to come.