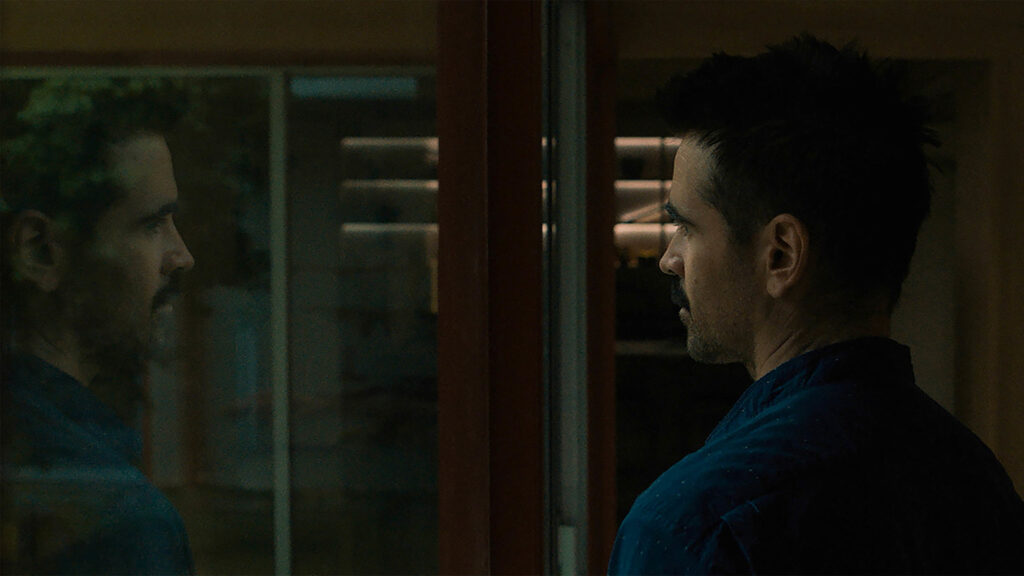 Colin Farrell appears in After Yang by Kogonada, an official selection of the Spotlight section at the 2022 Sundance Film Festival. Courtesy of Sundance Institute | photo by Benjamin Loeb / A24.

Technology is slowly moving out of the realm of the impersonal. The endless data collection that was welcomed by the dawn of smartphones and social media will gradually produce updates to AI like Siri and Alexa that feel like they understand who we are. The idea of what it means to be human will naturally be affected by the ability to replicate the experience, or produce a convincing facsimile.

In a distant future where cloning and adoption are the predominant methods for making a family, Jake (Colin Farrell) and Kyra (Jodie Turner-Smith) strive to ensure that their daughter Mika (Malea Emma Tjandrawidjaja) remains connected to her Chinese roots. They purchase a lifelike robot Yang (Justin H. Min), part of a line developed to teach Chinese history, in order to give Mika a “big brother” of sorts. The four make for quite the loving family, until malfunctions take Yang out of commission.

Much of director Kogonda’s narrative focuses on the efforts of Jake to repair Yang, fighting an uphill battle against a corporation that wants to replace him instead, allowing them to harvest his memories. While his efforts fall flat, Jake is left with a cube containing the essence of Yang’s experiences and consciousness. As Jake learns more about Yang’s “life,” particularly his secret friendship with Ada (Haley Lu Richardson), he comes to understand just how much more this seemingly household appliance had to offer the world than simple trivia.

The combination of Farrell’s conflicted grief and Kogonda’s carefully crafted aesthetic powers After Yang through familiar genre tropes. There’s much to appreciate in the way that Jake earnestly engages with the world, sometimes out of his own lust to uncover the meaning of life and at other times simply for the love of his daughter. Kogonda doesn’t show too many of his cards with regard to his vision of the future, but it’s neither overly nihilistic nor oblivious of the present’s current trajectory.

There are plenty of scenes where After Yang displays a keen grasp on the pulse of its philosophical intentions, but also several meandering sequences that make the same points about the nature of memory. The film is a beautiful yet somewhat overly simplistic entry in the broader sci-fi genre. As Kyra, Turner-Smith feels a bit wasted in a predictable supporting role.

The 101-minute runtime hardly feels well-utilized, but there’s enough going on in After Yang to justify the experience. Kogonda crafted such a beautiful world, but didn’t supply enough material for his eager cast to work with. Farrell’s predictably solid lead performance isn’t enough to shake the sense that this film should’ve landed with more of a thump than a thud.