‘Ruth: Justice Ginsburg in Her Own Words’ is a well-constructed romp through familar territory 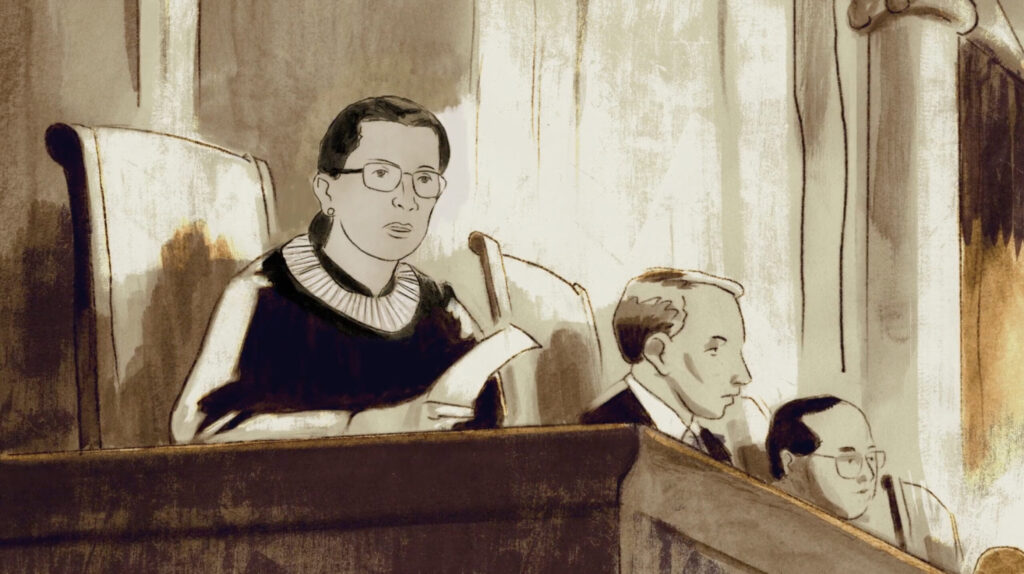 The life of Ruth Bader Ginsburg, the “notorious R.B.G.,” has been well-documented over the past few years. The documentary Ruth: Justice Ginsburg in Her Own Words plots its course through well-trodden terrain, exploring concepts that other films, as well as countless articles and cable news pieces have thoroughly presented. Director Freida Lee Mock crafts an aesthetically beautiful narrative that makes it easier to forgive the film’s familiar presentation.

In many ways, Mock’s film feels like more of a greatest hits piece than a documentary of serious inquisition. All the familiar notes are here, from the sexism that Justice Ginsburg faced in law school and in her early career, to her tireless efforts fighting for pay equality and women’s rights, to modern popularity as a feminist icon. Mock’s talents as a filmmaker are on full display, with beautifully animated sequences occasionally standing in for the rougher archival footage through the narrative.

It’s easy to see Ruth possessing the most impact with future generations of schoolchildren who may not be as familiar with RBG’s career as audiences in the present day. Mock includes a few sequences that highlight Justice Ginsburg’s passion for demystifying the Court, engaging with visiting students on fieldtrips in a personal manner. True to the film’s title, Justice Ginsburg is unsurprisingly the best advocate for her own legacy, bringing a thoughtful, personal approach to civics that’s sorely missing in today’s political climate.

Where Mock falters a bit is in her uncritical approach to some strands of RBG’s narrative often parroted in conversations centered on her legacy. Justice Ginsburg’s long friendship with her colleague Antonin Scalia is well-documented, perhaps the last major bipartisan friendship to thrive in the capital. On the surface, it might seem inspiring to see two ideological opposites find common ground in each other’s company, especially at the opera.

The modern American political discourse has exposed some of the root causes for why there aren’t as many love affairs across the aisle these days. Mock acknowledges that over their decades of friendship, RBG never substantively moved Scalia on any particular issue. For all her power as a force of nature, RBG failed to convince Scalia to side with her on several issues many believe that the court decided wrongly, particularly Citizens United v. FEC, a landmark ruling that receives some attention in the film.

The faint aura of aspirational optimism to be gleaned from seeing RBG and Scalia ring a bit hollow when you consider the morally bankrupt Republican Party, eager to toss any notion of ideology aside for its Trump sycophancy, playing footsie with white supremacy and countless conspiracy theories. We the audience are casually expected to ignore the fruits of Scalia’s labors on the court, all for the idea that it was nice to see him and RBG enjoying each other’s company.

Though Ruth first premiered back in 2019, well before Ginsburg’s death in September, 2020, it’s hard to shake the notion that Mock rather carelessly passed on any obligation to examine the America that Ruther Bader Ginsburg left behind. RBG was a trailblazer. Her broader legacy is complicated by the conservative nature of the court she served on, an ideological makeup that prevented her from authoring many powerful opinions, instead gaining notoriety for her scathing dissents.

RBG thrived in a world that offered few opportunities for Jewish women to succeed. There is a lot of power to be gleaned from hearing the story of an American icon. As much as things have changed over the past few decades, much remains the same. Glossing over that sad reality makes for a rosier picture, but does run the risk of creating a false sense of the world she left behind.