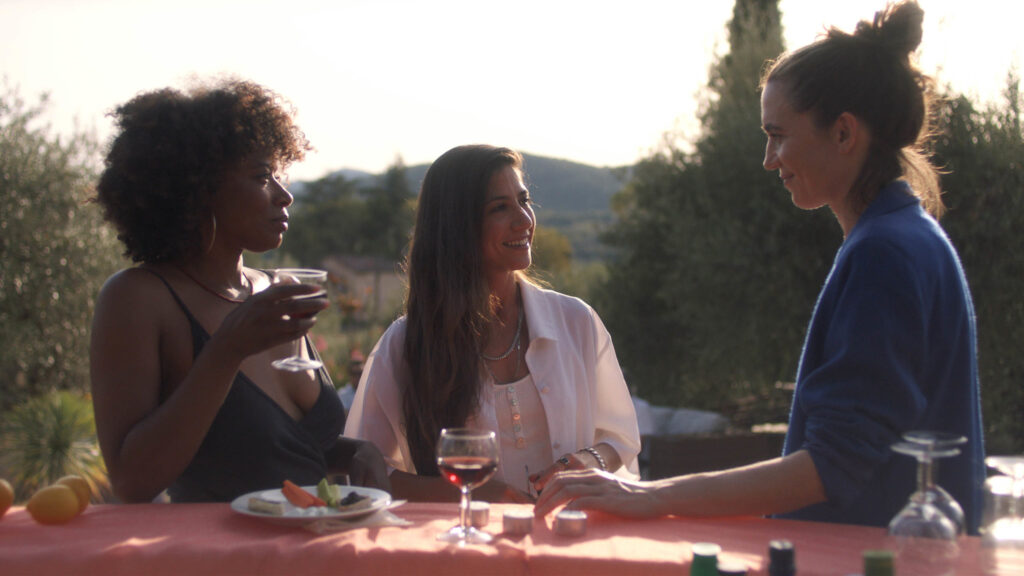 Idella Johnson, Sivan Noam Shimon and Hannah Pepper appear in Ma Belle, My Beauty by Marion Hill, an official selection of the NEXT section at the 2021 Sundance Film Festival. Courtesy of Sundance Institute | photo by Lauren Guiteras.

Society is thankfully turning the corner on treating polyamorous relationships as taboo or unsavory. People should be allowed to love who they want. Perhaps more importantly, they should be allowed to enter into relationships that maybe aren’t the best thing in the world for them, too. Part of how we learn what’s right for us is to have had the chance to know what isn’t right.

Ma Belle, My Beauty centers its narrative largely around this concept. Set against the backdrop of the beautiful south of France, the film follows Bertie (Idella Johnson) and Fred (Lucien Guignard), musicians who relocated from New Orleans. While Fred is desperate to get back on tour, Bertie’s depression complicates their plans, as does the arrival of an old lover, Lane (Hannah Pepper-Cunningham), whose presence stirs old emotions.

Director Marion Hill, making her feature debut, crafts a complex dynamic between the three leads. The tension is palpable in the air, a stark contrast with the awe-inspiring scenery. As a director, Hill impresses with her camera angles, constantly finding new ways to present the house that serves as the setting for a large chunk of the narrative.

To a certain extent, it makes sense that Ma Belle, My Beauty evokes a sense of discomfort in watching this uncomfortable scenario play out. Lane’s reappearance is almost immediately regarded as a bad idea, as is often the case when old lovers reconnect. Breakups rarely exist in vacuums.

The narrative is fundamentally unpleasant to watch, old lovers picking at the scabs of their failed romance. The three leads don’t really have much chemistry at all, a major obstacle for the film to overcome. It’s one thing for Bertie and Lane to be fundamentally wrong for each other, battling back the tides of passion. Trouble is, it’s not really clear that there was ever any passion here at all.

Johnson gives the most impressive performance of the three, giving Bertie a subtle hero’s journey that does play out in a satisfactory manner. Bertie is easy to root for, albeit with a degree of frustration for the avoidable reality of her current situation. Anyone who’s had any prolonged undesired contact with an ex might find it hard to relate to a ninety-minute narrative that could have been easily solved by leaving well enough alone with regard to the breakup.

Ma Belle, My Beauty is a beautifully shot film that suffers from an underdeveloped premise and a lack of chemistry between its leads. Hill has a lot of talent as a filmmaker, but maybe took too hands-off of an approach to the story. It’s hard to get invested in watching three people interact on screen together when it’s clear that none of the characters want to be there.