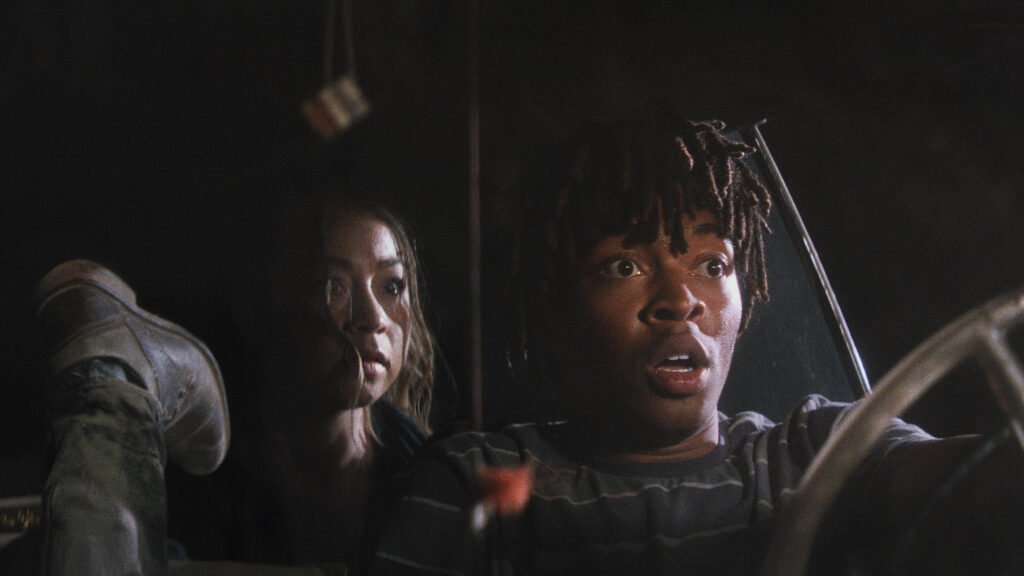 Tyson Brown and Shelby Duclos appear in First Date by Manuel Crosby and Darren Knapp, an official selection of the NEXT section at the 2021 Sundance Film Festival. Courtesy of Sundance Institute | photo by Manuel Crosby.

First dates can often provoke irrational lines of thought, the kind of mindset that makes buying a beat up ’65 Chrysler seem like a great idea. It’s only natural to want to look cool, especially when you’re a high school student with no idea what that concept actually means. First Date uses this concept to anchor its premise, before launching off on a crazy thriller full of dirty cops, shady con-artists, gang members, and an angry cat lady.

Part dark comedy, part high-octane thriller, First Date’s greatest strength is its ability to subvert expectations from scene to scene. Directors and screenwriters Manuel Crosby and Darren Knapp do a wonderful job crafting the tempo, sparking a lot of different emotions. The humor never comes at the expense of the broader ideas at hand.

The film has a unique relationship with its protagonist. While Mike is certainly the one who sets the plot of the film in motion, the ’65 Chrysler often serves as the centerpiece of the narrative both an as object of desire but also as a character in its own right. Brown gives a strong performance, grounding the often-absurd narrative with a sense of realism through his realistic portrayal of a lovesick teenager who’s in way over his head.

While the laughs keep rolling at a pretty steady pace throughout the film, the pacing does hit a couple of speed bumps in the third act. At 103 minutes, the film’s absurdity starts to wear a bit thin. Crobsy and Knapp do ties things together nicely, particularly with regard to confronting some questions that are bound to be on the audience’s mind.

Crosby and Knapp bring a level of sincerity to the world-building that elevates First Date beyond being just a fun thriller with some great humor. Mike and Kelsey are both given a relatable sense of depth, teens with more on their minds than sex or fast cars. While hardly an enviable night out, First Date is the kind of film that would make a good date movie, something for everyone to enjoy.