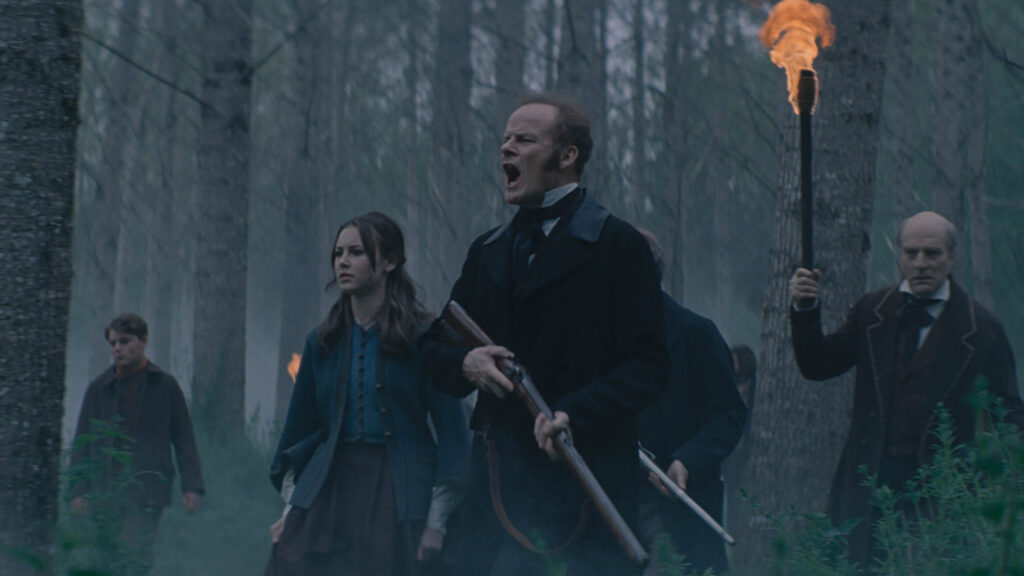 Alistair Petrie, Amelia Crouch and Simon Kunz appear in Eight for Silver by Sean Ellis, an official selection of the Premieres section at the 2021 Sundance Film Festival. Courtesy of Sundance Institute | photo by Sean Ellis.

In a world where vampires have gone completely mainstream, there’s something refreshing about Sean Ellis’ effort to craft a classic horror tale centered around their furrier counterparts. Werewolves are pretty frightening, inspiring terror not only from the external threat imposed by their stature, but also the implications of a monster transformed from of a non-consenting body.

Werewolves can’t control who they are, unlike the men crafted to oppose them in these narratives. Eight for Silver spends much of its first act depicting men at their worst, featuring a 19th century slaughter of an indigenous settlement that provokes the events of the film. Ellis hints that revenge is on the mind, but his muddled storytelling prevents the narrative from ever really delivering on this premise.

Eight for Silver doesn’t really have a protagonist in any true sense of the word. Much of the action revolves around the home of Seamus Laurent (Alistair Petrie), a brutal landowner with seemingly no personality. The introduction of pathologist John McBride (Boyd Holbrook) gives the film something to drive the action, but he’s hardly much of a hero to root for.

A big part of the issue seems to be the constant struggle of style vs. substance. This dynamic is on full display with the early slaughter of the indigenous people. Ellis opts to depict the brutal events from a wide panoramic angle. At the time, it’s unclear what message Ellis wants to send by depicting this brutality for a distance, far too much going on for the eyes to focus on any one point. It’s beautiful cinematography that ends up feeling a lot like a cop-out, coupled with the film’s penchant for extreme gore and violence.

Ellis crafts an absolutely beautiful film that has no substance. He has a great sense for framing a scene, with no ability to elicit emotion. The runtime of just under two hours is far too long for a film with no one to care about, a remarkable absence of anything resembling character development. The horror scenes lose their scare value early on, leaving the audience with little but a sense of diminishing returns.

The acting is serviceable in the sense that there’s little to complain about in any of the performances. Petrie, Holbrook, and the others aren’t really playing characters. Rather, Seamus and John are pieces in Ellis’ broader dollhouse, elaborate manor houses that play well into the film’s period setting. Such a travesty to see such beautiful filmmaking undone by an absentee script.

Eight for Silver might impress genre fans on a technical level. Ellis clearly has a gift for building the frame of a fantastic movie. With this one at least, it’s not at all apparent that he has any idea how to tell a story.

« Sundance Review: A Glitch in the Matrix
Sundance Series: Hive »