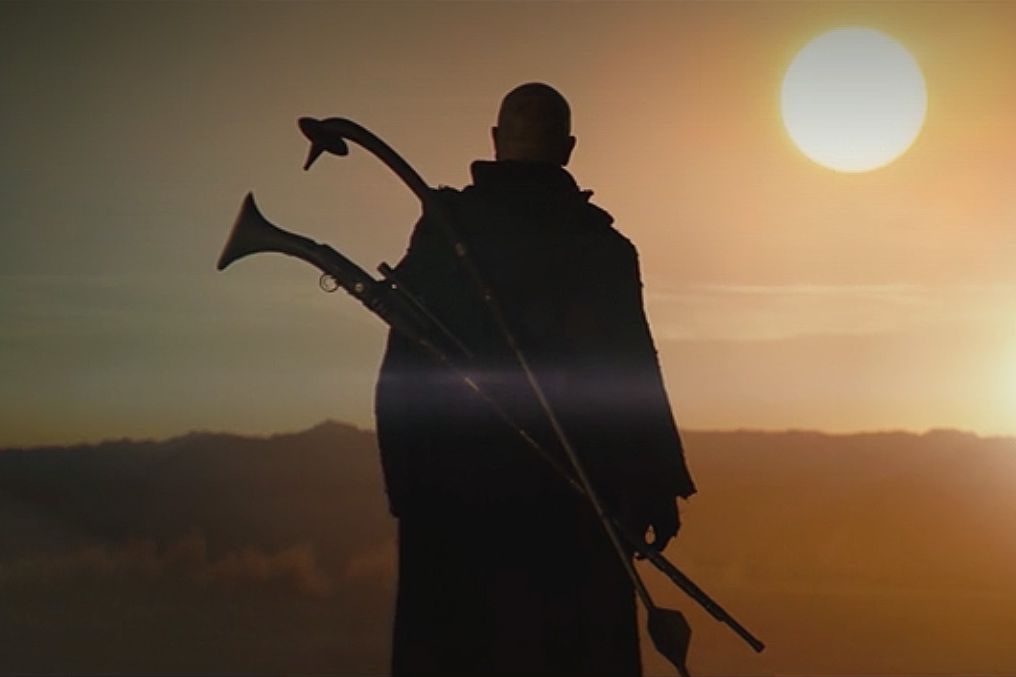 As The Mandalorian progressed through its first season, the question of narrative constantly presented itself. The show has existed in the fairly uncommon middle-ground between serialization and episodic, most often preferring the advantages of self-contained storytelling over a broader long-game. The season one finale suggested a turning of the page of sorts for the series, with the titular character embarking on a specific quest to reunite the beloved Baby Yoda with his own kind.

That held true for about ten minutes into the episode, until Mando found reason to return, yet again, to Tatooine. For all the endless possibilities out there in the galaxy, this same pile of rocks seems to be the only place that matters. Tatooine certainly does matter, for throwback references such as the return of A New Hope’s R5-D4 and his bad motivator. Between Tatooine, Nevarro, and Jakku, Star Wars certainly loves its shades of the same desert aesthetic.

Episode one is essentially a retread of season one’s fourth episode, both centering on villages coming together to defeat a giant big-bad. The Krayt dragon is another figure of franchise lore, the figure who Obi-Wan impersonated with a loud shriek to scare off the Tusken Raiders back in the first movie. The Mandalorian brought to life an abstract idea that has existed in fan theories for decades.

The CGI-crafted menace was pretty impressive, putting aside the obvious Dune comparisons. Tatooine has always been compared to Dune, but Tatooine didn’t have its own sandworm before (Sarlacc doesn’t really count since they stay in their pits). Dune comparisons surfaced again with talk of water feuds between the village of Mos Pelgo and the Sand People. At least there wasn’t any talk of the spice!

As the Marshal, Timothy Olyphant was pretty perfect, channeling his roles in Deadwood and Justified. Show creator Jon Favreau, pulling writing and directing duties on the episode, also threw in a nice touch with fellow Deadwood alum W. Earl Brown turning up as the Weequay barkeep, giving Mos Pelgo the feel of a frontier mining town. Olyphant was a bit more Raylan Givens than Seth Bullock, his obvious joy radiating in every scene.

Olyphant’s exuberant performance as book creation Cobb Vanth was enough to carry the episode, otherwise relatively light on its cutest asset. Seeing Vanth in the Boba Fett armor practically overshadowed the episode’s biggest reveal at the end, with Temuera Morrison returning to the franchise, portraying the adult Boba without his helmet for the first time. In theory, Morrison could be playing one of thousands of Jango Fett clones, but it’d be pretty shocking if it wasn’t the most famous wearer of Mandalorian armor.

Neither Boba nor Jango are actually Mandalorians themselves, a point of great fan interest over the years which should make for a pretty interesting showdown later on in the series. As far as Mando’s primary quest this episode goes, it’s a little weak to have him roaming around looking for others of his kind. Especially if that quest continues to take Mando and Baby Yoda back to familiar territory.

One aspect of the episode that didn’t really work was the return of Amy Sedaris as Peli Motto. Sedaris brought a lot of comedic charm last season, but her interactions in this episode felt rushed and perfunctory. For a nostalgia-heavy episode, I’m not sure we needed much nostalgia for last year. The writing simply didn’t give Sedaris anywhere to go.

The action scenes were extremely solid, if not a bit obligatory. There’s plenty to love watching Mando slay a dragon alongside Timothy Olyphant and celebrating with a big cut of Krayt steak for Baby Yoda to eat when he’s not chowing down on nuggies. I’m sure we all could’ve used a few more adorable moments from the little fella who took a backseat role this episode, the perfect antidote to 2020.

Olyphant’s exuberant performance carried an episode that was otherwise a bit too comfortable in familiar territory. Maybe the nostalgia will run out at some point, though the return of Boba Fett suggests that probably won’t be for a while. Endless callbacks didn’t exactly turn out so well for The Rise of Skywalker, but The Mandalorian has faired much better in this regard.

To some extent, one might want to expect a bit more out of a show that was nominated for the Emmy’s top prize. The Mandalorian is often better described as great entertainment rather than prestige drama, not the kind of fare that traditionally competes for Best Drama. As long as the show keeps putting out enjoyable episodes like this premiere, the long-game and serialization questions won’t matter all that much. We’ve seen this story before, but it’s a pretty good story.

Programming note: Estradiol Illusions will be featuring weekly podcast reviews for the show. Episodes will release either Saturday or Sunday after each new show. Thank you for reading!