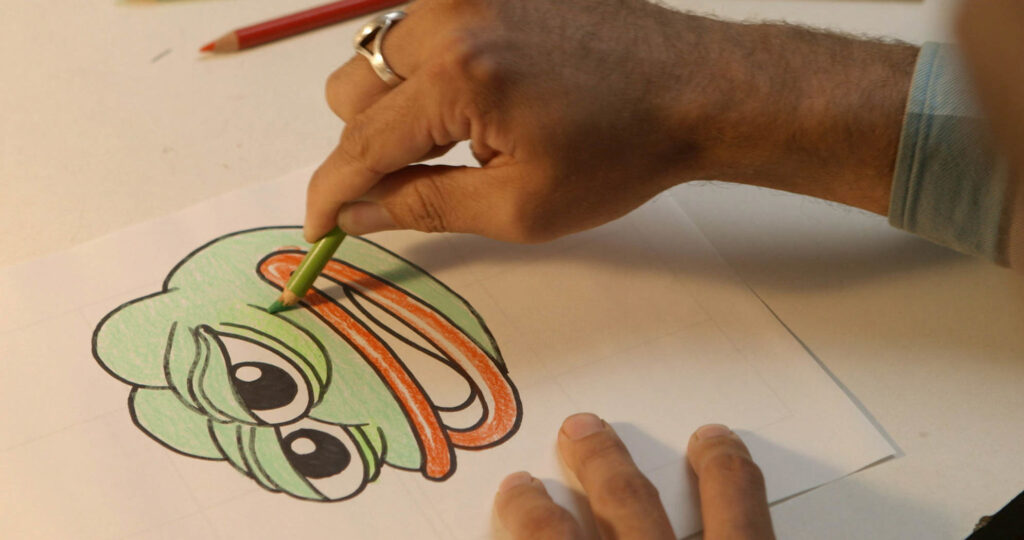 The tragedy of Pepe the Frog is one of the saddest stories to come out of meme culture. Cartoonist Matt Furie created the laid-back amphibian as part of his Boy’s Club comic back in 2005. The character’s signature phrase, “feels good man” caught on in the early days of social media, with many quoting Pepe on the Myspace or Tumblr pages.

On the road to Internet stardom, Pepe found himself particularly popular on the imageboard site 4chan. The anonymous nature of 4chan has made the site popular among the alt-right, neo-nazis, and other group who would otherwise be reticent to share their identities. Pepe gradually become their standard bearer, a symbol of hate stripped from his fun-loving creator. The documentary Feels Good Man captures the strange tale of Pepe’s crazy life.

Internet culture is hard to understand and even more difficult to explain. Director Arthur Jones meticulously breaks down how 4chan works and how Pepe found himself riding the first wave of memes. He’s a cute, sad figure with a weird universal appeal. He’s like a cartoon Rorschach test, able to be whatever the individual needs him to be. Sadly, that made poor Pepe an easy target to be co-opted.

Matt Furie is a very likable person. He’s soft-spoken and laid back, the kind of college stoner who never totally grew up. The film includes a number of scenes in Furie’s home with his partner and daughter, painting a stark contrast between Pepe’s gentle creator and the hateful groups that have hijacked his image.

The film includes a fair number of superb animated sequences that transition the film between its subjects. Furie appears sporadically throughout the narrative, reflecting the bizarre cultural divorce between the creator and his work. Jones depicts Furie’s legal battles with far-right figures. After a while you just want to give him a hug, a man full of obvious despair.

Jones interviews a few 4chan users to explain how the site managed to turn Pepe into a hate symbol. The scenes are often hard to watch, but it’s an important lens to shine on a toxic subculture. Thankfully, Jones does so responsibly.

Feels Good Man also takes a look at the statistical impact of memes across the world. Studies place Pepe among the most recognizable of memes in the world, a commodity so valuable that “rare Pepes” sell for thousands of dollars at auctions. It needs to be seen to be believed. Jones captures the phenomenon quite well.

There’s a strange line drawn between Pepe and the election of Donald Trump, the frog used as a rallying cry for incels. Feels Good Man uses a lot of levity in its approach to this dark, twisted reality we’re supposedly living in. Pepe became an Internet martyr, but the film goes out of its way to assure its audience that there’s hope for a better tomorrow.

Feels Good Man is a touching documentary about a tragic American icon and his grieving creator. Pepe deserved better from this world, but in Jones, he finds a valuable orator. The film is a shining example of how to cover the Internet age in all its peculiarities.