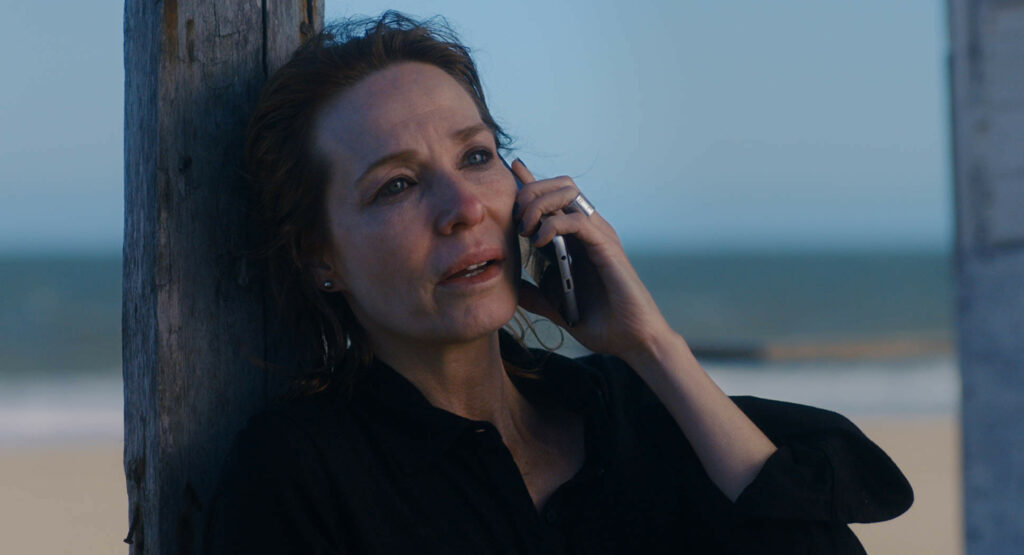 Personal space is a vital component to a happy life. Having work done on one’s home naturally leads to an Encroachment on that sense of privacy. High Tide is a film that explores the struggles of agency when people feel they can take advantage of you.

Laura (Gloria Carrá) is having an outdoor BBQ built at her home, a beautiful secluded modern house that’s also close to the beach. She sleeps with the lead contractor Weisman (Jorge Sesán), a man she feels some attraction toward despite the sense of superiority she admits in their power balance. Weisman isn’t much of a catch, but Laura likes to be in charge of her own decisions.

The situation is exacerbated once Weisman disappears, leaving his employees to finish the job. His subordinates have little respect for Laura, using her home at will and making a mess of the grounds. Her efforts to control the dynamic fall on deaf, drunken ears.

High Tide is an intimate kind of film. Director Verónica Chen shows off her skills as a filmmaker by the way she constantly reinvents Laura’s relationship to her surroundings, namely the house where the vast majority of the narrative takes place. Very little changes in the setting, but Chen makes sure it never feels stale.

Carrá has a way of communicating Laura’s angst with subtle gestures. She doesn’t have a ton of dialogue, instead conveying the plot progression largely through emotion. She’s incredibly relatable as a lead, capturing the essence of one’s loss of privacy. Anyone who has ever had their space invaded can naturally identify with the dilemma Laura faces for most of the film.

As a setting, Laura’s house proves a strong place to situate the narrative, but the film struggles a bit in the few scenes set elsewhere. So much of the story is tied up with Laura’s sense of authority that less-focused efforts to develop her as a character fall a bit flat. You get the sense that the film did need to stretch its legs a bit from a single location, but it doesn’t really know what to do with that time.

The film also sputters a little bit down the stretch, leaving an ending that’s quite thought-provoking, but a little out of left field. Chen is great at crafting scenes that a general audience would find relatable, building a foundation that keeps you thinking long after the credits roll. Laura isn’t an easy character to dissect, which makes her all the more compelling as a protagonist.

At times, High Tide is a frustrating film, but it’s a finely crafted narrative well-worth a watch. Laura is an inspiring character in a weird sort of way. Women are often pushed around by men without a care in the world. Chen’s triumph is through her ability to unpack everyday sexism and the lasting ramifications that occur when our personal space gets violated.