Today we are joined by Dr. Mark Nelson, one of the eight original scientists who lived inside Biosphere 2 for two years in the early 90s. The events of Biosphere 2 were chronicled in the excellent documentary Spaceship Earth (available on Hulu), one of Ian’s favorites from Sundance. Dr. Nelson talks at length about his experiences inside Biosphere 2, as well as many of the discoveries they made along their journey.

Dr. Nelson has a new book out called Life Under Glass: Crucial Lessons in Planetary Stewardship from Two Years Inside Biosphere 2. You can purchase it here: https://www.synergeticpress.com/shop/life-under-glass/

Dr. Nelson’s other books include Pushing our Limits: Insights from Biosphere 2  (https://www.amazon.com/Pushing-Our-Limits-Insights-Biosphere/dp/0816537321) & The Wastewater Gardener: Preserving the Planet One Flush at a Time (https://www.synergeticpress.com/shop/the-wastewater-gardener/) 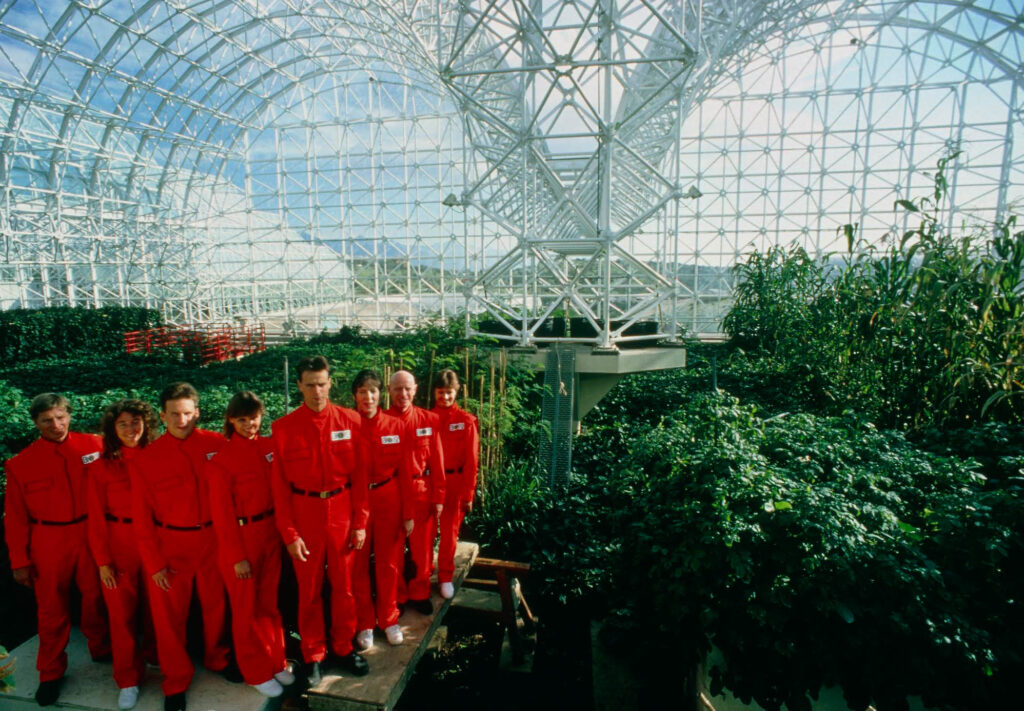 A still from Spaceship Earth by Matt Wolf, an official selection of the U.S. Documentary Competition at the 2020 Sundance Film Festival. Courtesy of Sundance Institute.

The relative value of the individual versus the collective is a well-explored school of philosophy. Hegel and Marx built their careers emphasizing the potential unleashed when the proletariat synchronizes with the nation-state. John Allen understood the power of organized labor, harnessing a group of hippies in a series of jaw-dropping creations.

Spaceship Earth documents the transformation of Allen’s commune from its humble origins farming, all the way to biosphere engineers on their self-appointed task to save humanity. What the group lacks in academic credibility, it makes up for in interpretative theatre.

About half of the film focuses on the group’s most impressive project. Biosphere 2 was a unique product of the 90s, with space-age optimism rampant in the air. By locking up eight people in an enclosed biosphere for two years, an environment meant to emulate the various regions of the Earth, Allen and his buddies aimed to provide a road map for humanity after Earth.

Spaceship Earth demonstrates the power of a group of hippies working collectively with the help of a wealthy billionaire friend. A preposterous yet very entertaining story. Allen’s boat-building, world traveling antics are very amusing, but less impressive once the film exposes Ed Bass as the bank behind the curtains.

The film doesn’t really go out of its way to attack the credibility of Biosphere 2, but some key trends emerge that expose the project as a farce. Constantly billed as a “research” experiment, none of the members of John Allen’s merry band have anything to say about revelatory findings from the project. Their lack of controls for Biosphere 2 ruined any value for academic purposes, but the group doesn’t really contest this.

Biosphere 2 was the professional wrestling version of science, a tantalizing farce for the media to gobble up. The self-described biospherians seems to look back fondly on their time locked up in a CO2-riddled terrarium. The documentary itself is a blast, including cameo footage from Rue McClanahan and a young Steve Bankom.

As a film, it doesn’t really try to dig all that deep into the biosphere’s artificial terrain. Allen himself explains this quite well. Life is theatre. The documentary concerns itself with the theatrics of the group’s schemes. Maybe there doesn’t need to be anything else.

The only area of struggle for director Matt Wolf lies in the narrative within the biosphere. Spaceship Earth takes a broader approach to the history of Allen’s group, squeezing all of that plus Biosphere 2 in a two-hour runtime. This dynamic forces two different climaxes for the narrative, one for the biosphere and another for the documentary itself. Wolf bites off a little more than he can chew in the third act, causing a bit of indigestion with his abrupt landing.

Spaceship Earth is absolutely fascinating. There’s little to learn from the antics of a wealthy commune, but they’re so much fun to watch. What’s missing in substance is certainly made up by theatre. For Allen, life is too short to worry about things like facts or research. Perhaps there are worse legacies to leave.