prisoners of the ghostland Archive

Sundance Review: Prisoners of the Ghostland 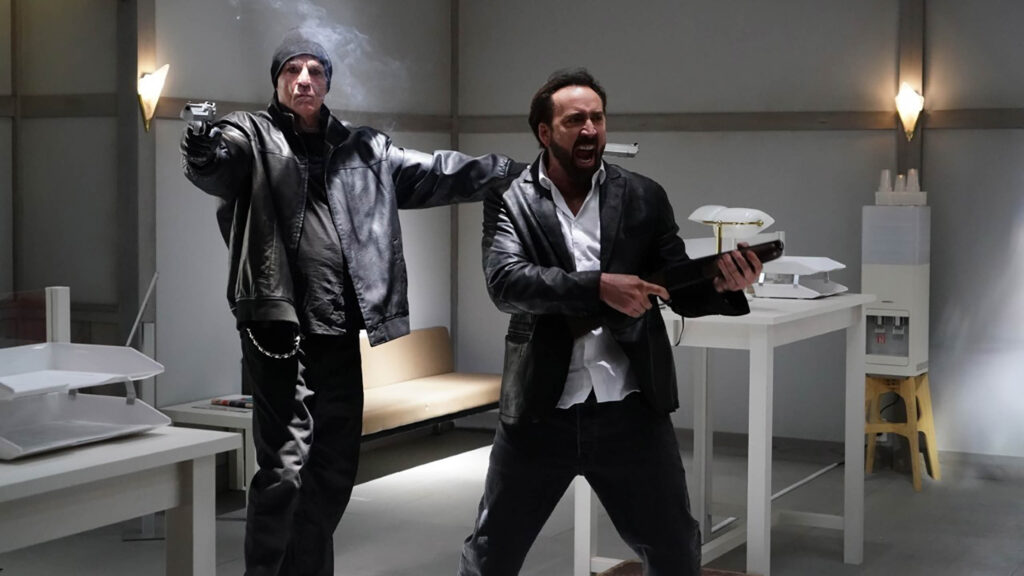 Nick Cassavetes and Nic Cage appears in Prisoners of the Ghostland by Sion Sono, an official selection of the Premieres section at the 2021 Sundance Film Festival. Courtesy of Sundance Institute.

For all the awe and wonder evoked from the massive technological advances in special effects, there’s still nothing quite like setting eyes upon a truly exquisite practical set. Iconic Japanese director Sion Sono builds full worlds to tell his stories, filling each frame with tending love and care. Prisoners of the Ghostland couldn’t have been filmed with a green screen, requiring human hands to craft its universe, a marvelous sight to behold.

Nicolas Cage plays a figure known only as “Hero,” a puzzling name for a man who makes his debut in the midst of conducting a bank robbery alongside a character called “Psycho” (Nick Cassavetes, perhaps best known for directing The Notebook). Years later, an imprisoned Hero is tasked by the Governor (Bill Moseley) to venture out into the “ghostland” to rescue his “granddaughter” Bernice (Sofia Boutella). Before departing, Hero is fitted with a suit armed with explosives on his neck, elbows, and testicles, rigged to explode should he fail or merely entertain impure thoughts toward Bernice.

Chekov’s testicle-bomb is probably a fitting point through which to engage Sono’s absurd world. The detail to the practical set is a wonder to behold, an homage to Japanese noir cinema and Mad Max dystopias. Originally intended to be filmed in Mexico before Sono suffered a heart attack, causing production to be shifted to Japan, the director clearly has Westerns on his mind. Despite all the obvious tributes to cinematic lore, the world of Prisoners of the Ghostland feels rather lived in, a party whose hosts are standing by to usher the audience into their strange land.

Sono provides Cage with a worthy playground for the actor to showcase his unique skillset. Hero doesn’t have a ton of depth as a character, but Cage is clearly having the time of his life. One-liner after one-liner fly into the ghostland with exuberant glee, almost like a victory lap where the veteran actor can remind the world once again why he’s had such a remarkable career. It would be a tremendous shame if these two didn’t team up again.

The story is bound to lose some people at times. There’s a traditional Western narrative at times, spliced with scenes of Moseley and the rest of the townsfolk partying away. The third act only sort of acknowledges that it’s supposed to set a conclusion. Legendary martial artist Tak Sakaguchi is largely wasted in a supporting role as Yasujiro, the governor’s right hand man.

Sono throws a lot of hints at setting up dramatic fight scenes never really come. Prisoners of the Ghostland isn’t the action movie that some might expect given the opening. There are more cerebral intentions at play, though Sono keeps his cards fairly close to his hands.

For some, the film might be a little too scattershot to satisfy. It’s not totally responsible to say that it’s a tough film to understand, potentially implying that there is something here to understand. Sono is either being aggressively obtuse, or he hasn’t figured it out either.

Which is not to say that Prisoners of the Ghostland is inaccessible. Sono’s world is welcoming, the kind of place you would want to spend a day wandering around, trying your best to soak it all in. The director paints with such reverence for film as a craft, art as the top priority. The story is skimped on a bit too much at times, maybe not as subversive as Sono intended.

There is far too little beauty in today’s blockbusters. CGI and green screens can present the idea of worlds, even people, but Sono reminds us all of the sheer power of physical actors moving through physical spaces. You may not love each scene in Prisoners of the Ghostland, but the obvious love that went into making it leaves an impression that makes it easy to forgive the flaws.