Kusama Infinity Delicately Illustrates a Portrait of a Persistent Spirit 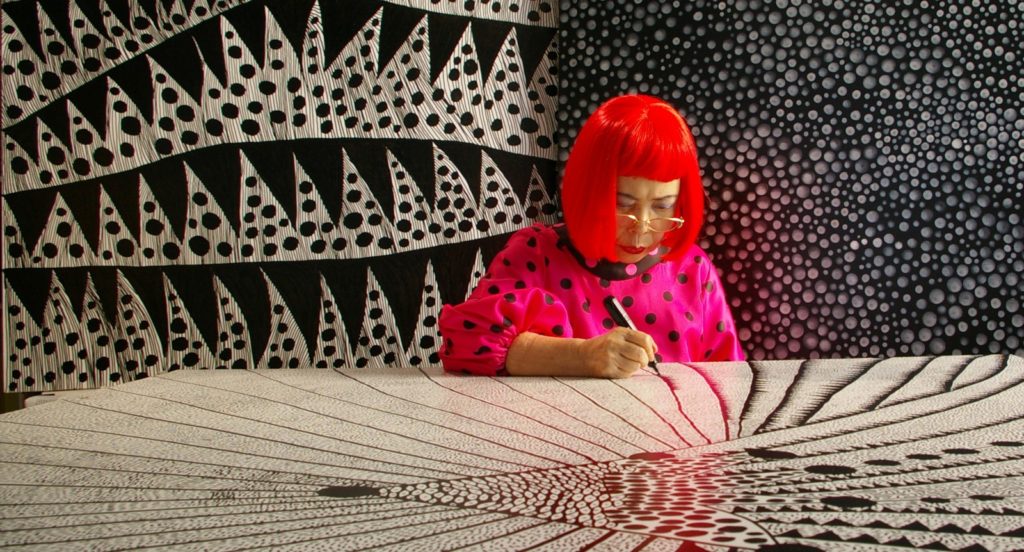 The notion of timelessness persistently follows art pieces that are perceived to stand the test of time. We say great art is timeless because it transcends the cultural era it was born into, as countless pieces are introduced each year while few are destined to truly be remembered. It can be easy to forget that timeless is a label added retroactively, forgetting the complex mechanics that take art from the now to the eternity. For Yayoi Kusama, the acknowledgment of greatness came much later in her career than for many of her respected contemporaries. Kusama Infinity tells the story of the process that plucked her from unfortunate obscurity into prestigious art galleries across the world.

The story of Kusama, still actively working into her ninth decade, is an especially tough one to cover in a ninety-minute documentary. Director Heather Lenz does a very good job juggling the numerous fascinating eras of Kusama’s life, intertwining her stylistic development with the pertinent biographical details of the periods. Much of the film is dedicated to her time spent in New York City from 1957-1972, where she exhibited alongside art icons such as Andy Warhol and Claes Oldenburg.

The film serves as a thorough case for the total reexamining of what we view to be the “canon” of art, as well as the institutional biases that still hinder the careers of too many women and minorities like Kusama. Too much of cultural preservation rests in the hands of an exclusive club designed to reward its own, an issue that similarly plagues literature, film, and music. Kusama Infinity includes several scenes that examine respected works of Warhol and Oldenburg among others, suggesting that their pieces were imitations of Kusama’s own innovations, a notion lost on the canon for decades. The film serves as an excellent cautionary tale for those who seek to curate culture, recognizing that no era should be solely represented by a bunch of white men.

Kusama Infinity has a peculiar relationship with its source, who appears throughout the film in interviews and other segments. Lenz covers an expansive amount of ground in Kusama’s career and personal life, but it never really feels as though she’s diving very deep beneath the waters. Kusama’s life invites many questions, but the film never really takes an investigative approach toward its subject. Instead, it looks like it’s trying to be the definitive documentary on Kusama’s life, a goal it achieved by token of her participation. The result is a film that’s fascinating from start to finish, but one whose director never really sought to make her own mark.

It’s hard not to think of the #MeToo movement when watching Kusama Infinity and the ways in which Kusama’s career was neglected as male contemporaries received many accolades for ripping off her material. Kusama has enjoyed a career resurgence since the 1990s and is currently one of the most successful living artists in the world. Her film doesn’t seek to correct the sins of the past so much as it serves as a warning sign against the kind of practices that hindered her career in the first place. Art cannot be timeless unless it is allowed to be seen. Kusama’s life is an inspiring story of the resilience of passion to take the artist to infinity even if high society isn’t quite ready for the ride.