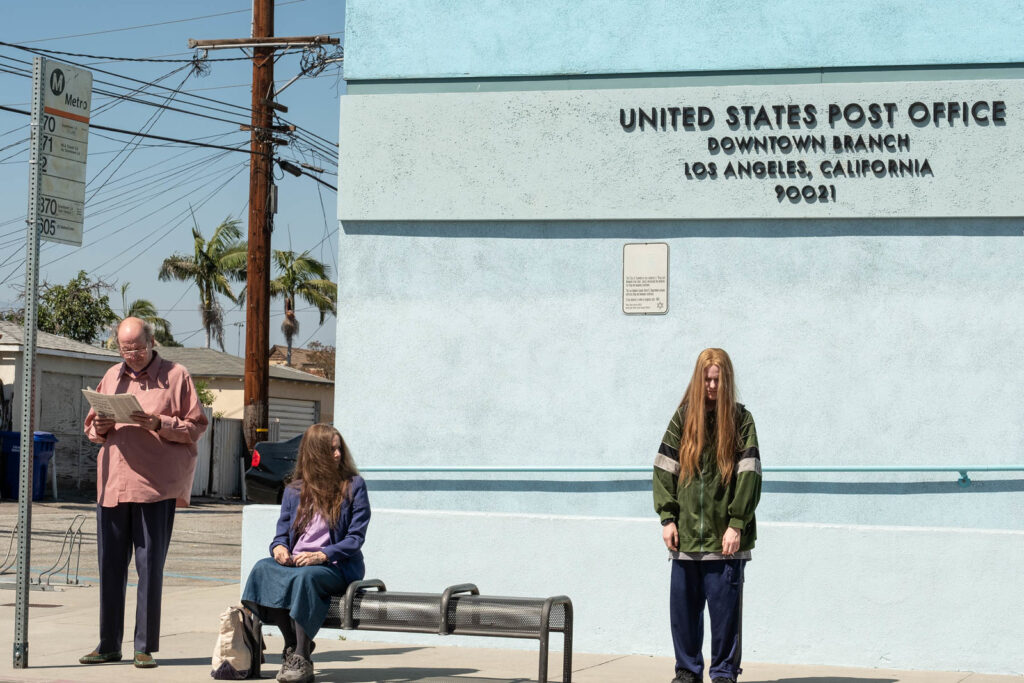 Plenty of films feature villains whose entire villainy is based on the lack of love they received from their parents. If love is all, what are we without it? Kajillionaire doesn’t seek to vilify its characters while exploring what happens when families operate without an ounce of affection.

Theresa (Debra Winger) and Robert (Richard Jenkins) are two con artists who grift their way through life with their twenty-six-year-old daughter Old Dolio (Evan Rachel Wood). They live in squalor in a dilapidated office space adjacent to a chemical plant. Every afternoon the plant drips mountains of foam into their living space, requiring the three to schedule their day of schemes around cleaning up the mess. It’s a sad life to say the least.

An airplane encounter with a young woman named Melanie (Gina Rodriguez) changes their group dynamic quite a bit. Theresa and Robert bond with the eager thrillseeker, much to Old Dolio’s dismay. The affection they give Melanie stands in stark contrast to the transactional nature of their relationship.

Part of the beauty of Kajillionaire lies in the shamelessness of its leads. They’re not completely soulless, but the kind of awful people who manage to lie, rob, and steal on a daily basis without ever feeling remorse for their actions. The grift is their whole life, always in search of a con that’ll keep their landlord off their back for a few more weeks.

Writer and director Miranda July slowly unpacks the broader themes about love and affection. The narrative moves at a casual pace, not in any rush to get to its destination. July never lets the heavy stuff get in the way of the fun.

The acting is superb. Winger, Jenkins, and Wood are a very believable, highly dysfunctional family. Rodriguez’s Melanie is a little more preposterous, but she gives the character enough depth that she doesn’t end up feeling like a plot device. None of the characters are particularly likable. You root for them to the extent that one wants a class-clown to get away with pulling a prank on the teacher.

Kajillionaire is largely a film about human nature. Can people ever change? That kind of metaphysical question doesn’t lend itself to an easy answer, but July doesn’t try to force contrived findings upon the audience. It’s more a character study piece, perhaps one that didn’t publish its findings just yet.

The plot of the film has a pretty narrow scope, oddly reflective of the characters’ own lives. They don’t have goals or ambitions behind living to the next day. Growth for Old Dolio carries a steep learning curve, a simple hug opening up far too many doors.

Kajillionaire is a peculiar journey full of laughter that isn’t always quite sure if it’s heading in the right direction. It’s an uncomfortably sweet narrative. With a great script and excellent lead performances, the film is one that will certainly keep you thinking after the credits roll.