Part of the beauty of 1956’s The Revolt of Mamie Stover is the way the film’s core themes have evolved in the nearly seven decades since its initial release. The original 1951 novel of the same name served to illustrate the decline of American society, a criticism that every subsequent generation has heard a billion times before adulthood. No matter if its 1956 or 2021, the kids are always blamed for ruining everything.

Jane Russell leads the show in the title role, playing a twenty-six-year-old woman on a ship to Honolulu, looking for work at a local dance hall that caters to off-duty servicemen. Set in 1941 against the backdrop of the attack on Pearl Harbor, Honolulu is the place to be for people looking to make a quick buck off all the chaos. While never explicitly stated in the film, it is heavily implied that the shady dance hall, which serves watered-down liquor to soldiers looking to book private sessions with its employees, makes its fortunes through prostitution.

Mamie quickly bonds with fellow passenger Jim Blair (Richard Egan), a writer and reserve officer with a house in Honolulu. Due to the dance hall’s strict rules against its employees having bank accounts, Mamie enlists Jim to help her protect her savings, which quickly accumulate as a result of her prowess in the field of seduction.

Russell delivers a powerful critique of capitalism’s inherently sexist applications, thoroughly debunking any nobility within the military-industrial complex. Mamie spends her money buying up local real estate, whose owners are eager to sell in the face of imminent war. Derided as a war profiteer and a trollop, Mamie thrives in an environment that doesn’t want to have a place for women.

Public opinion on America’s unending wars has certainly changed drastically in the decades since The Revolt of Mamie Stover. Mamie’s modest success is mere peanuts compared to the billions made by corporations and their private armies intent on eternal combat in the Middle East. When combined with capitalism’s decades-long efforts to terraform Hawaii on behalf of the tourism industry, one can’t help but root for Mamie’s quieter sense of protest.

Which isn’t to say that The Revolt of Mamie Stover is a perfect narrative. The 92-minute runtime is spread a bit thin between Mamie’s romance with Jim and her gradual domination of the dance hall. Dance hall owner Bertha Parchman (Agnes Moorehead) largely takes over for Jim as Mamie’s primary foil in the third act, shortchanging much of Russell and Egan’s natural sense of chemistry. As Bertha’s primary enforcer Harry Adkins, Michael Pate puts in a strong supporting performance as a scummy businessman intent on preserving the status quo.

The show mostly belongs to Russell, whose charisma is more than enough to carry the film through its minor shortcomings. The title role was originally intended for Marilyn Monroe, its subject matter is a bit of an odd fit for the staunchly conservative Russell. While The Revolt of Mamie Stover’s themes will undoubtedly resonate differently with modern audiences, the film is a valuable case study as to the ways that previous generations applied varying standards of morality to unfettered greed, depending on which sex was benefitting from the fruits of capitalism’s rot. 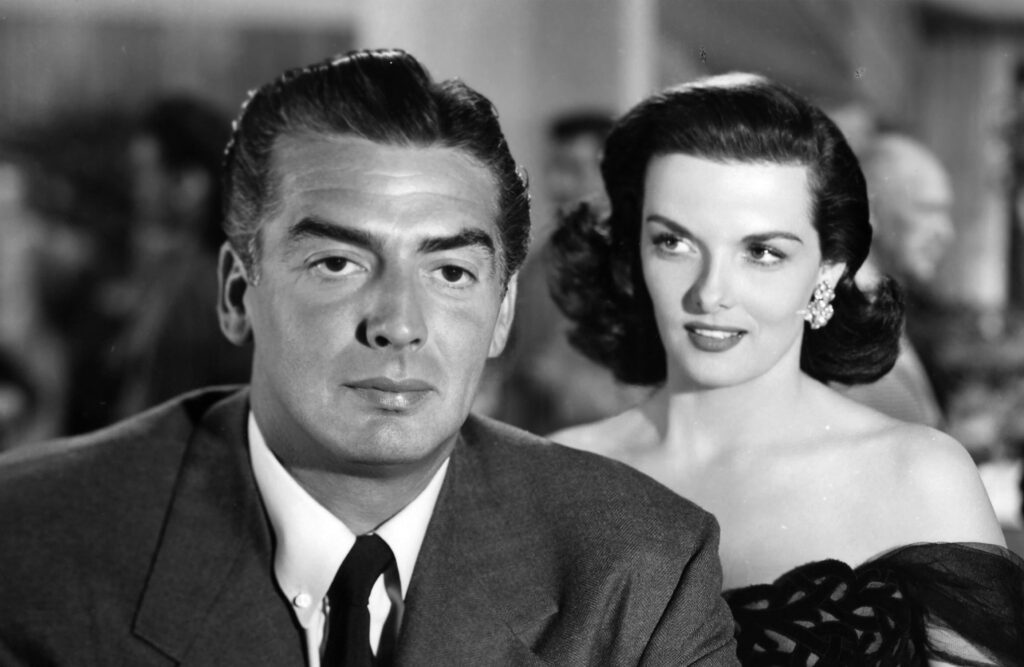 Many have seen Las Vegas as a place of opportunity, only to leave town feeling like a loser. Vegas isn’t for everyone. It takes a certain kind of person to thrive in such a high-stakes, cut-throat environment. 1952’s The Las Vegas Story explores the kinds of characters who would try their luck there and the unfortunate suckers who would be better off steering clear of Sin City.

Linda Rollins (Jane Russell) used to thrive as a singer in Vegas before leaving town, much to the chagrin of her old performing partner, Happy (Hoagy Carmichael), who plays piano at the Last Chance Casino. Linda returns to town at the behest of her husband, Lloyd (Vincent Price), desperate to make a quick buck. While in town, Linda reconnects with her old fling Dave Andrews (Victor Mature), a local police lieutenant, sparking memories of what might have been if she’d settled down with a better man.

Director Robert Stevenson sends his narrative in about a million different directions. The drama of Lloyd’s money troubles becomes exacerbated by a murder about halfway through the narrative, an audible that shifts the film’s focus from character drama to a rather conventional whodunit. The story’s bread and butter is the relationship between Linda and Dave, enhanced by the great chemistry between Russell and Mature.

The film’s unfocused narrative is buoyed by a deep bench of compelling characters, led by Russell’s commanding lead performance. Linda didn’t want to return to Vegas, but quickly rekindles the magic in the place where she used to thrive. The film often offers meditations on the passing of time, refreshingly upbeat despite its noir genre trappings.

While the pulpier murder mystery intrigue cuts some of the character drama short, the tonal shift gives way to one of the earliest helicopter/car chases in film, a highly impressive feat of cinematography. Russell is unmatched by her male counterparts, but Mature brings a great deal of depth to Dave, refusing to let the character be put into a box as a jealous ex-boyfriend.

Linda possesses a level of complexity rarely afforded to female characters in the time period. Her relationships with her husband and former lover aren’t pitted against each other in the way the audience might expect, instead reflecting the intricate complexity of human emotion that isn’t easily boxed into a love triangle. Russell is given so much space to explore Linda’s motivations, quite impressive given everything else going on in the film.

What works best about The Las Vegas Story is the way this world feels lived in. The characters carry their decades of baggage while striving toward a better future. Vegas’ unforgiving atmosphere isn’t for everyone, but few films so eloquently depict the appeal of the city for those tough enough to thrive there. If you can make it in Vegas, could you be happy anywhere else?

Stevenson’s final credited RKO picture may not exactly be a triumph of filmmaking beyond its groundbreaking helicopter chase, but The Las Vegas Story is the kind of narrative that sticks with you long after the credits have rolled. A mid-movie musical number from Carmichael’s Happy perhaps illustrates this dynamic best, an out-of-place sequence that hits home through its sheer delight. Like the jazz Carmichael so excelled at, the film knows how to sequence itself in a way that feels both spontaneous and carefully choreographed in its delivery.

The various pieces of the film don’t necessarily connect in a way that crafts the most cohesive experience, but there’s so much to enjoy along the way. Fine art is rarely produced by throwing everything at the wall to see what sticks. The Las Vegas Story feels like Stevenson managed to stick most of what he’d thrown, a real treat of a B movie well worth the ninety-minute runtime.