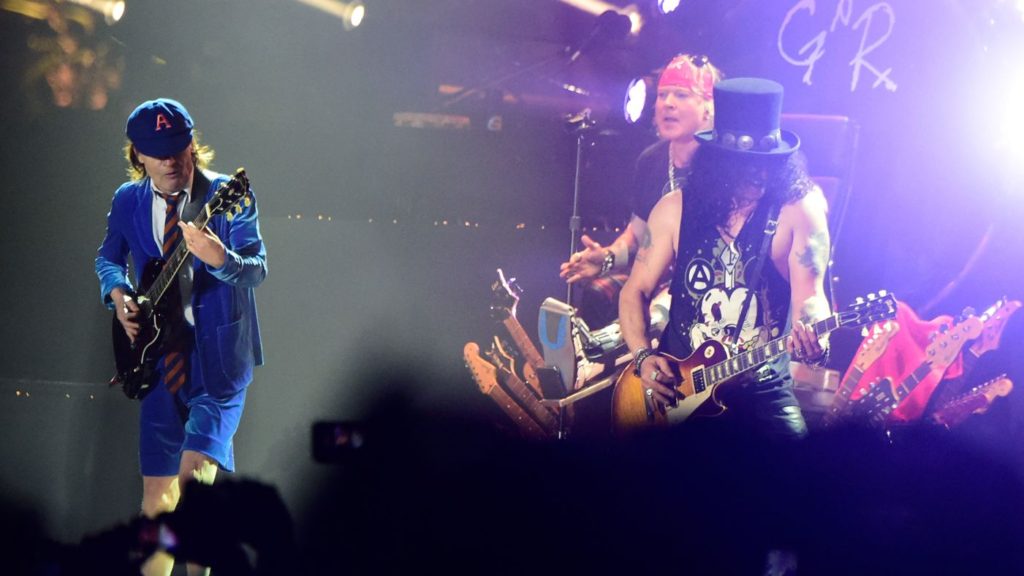 Like many, I took the news that Axl Rose is joining AC/DC for their upcoming tour with a mixture of disbelief and indifference. The thought of an old tired man joining an old tired band would have been very exciting twenty years ago, but having seen both of them in concert, I wasn’t exactly looking to spend any sum of money to watch that presumed mess. Then Coachella happened.

Axl’s health was a big question mark heading into day two of the three-day music festival. When I saw GNR back in 2006, Axl needed numerous breaks to rest his voice, relying on numerous solos from his nine-piece band as well as a guest appearance from Sebastian Bach to make it through the set. Fast forward ten years, the only things that changed were Axl’s hair (no more dreadlocks) and his new throne, on loan from Dave Grohl after he broke his foot performing a warm up show in Vegas. The thought of a seated Axl may have raised expectations, as the weight of expectations fell totally on Slash, whose status as an elite performer has never been called into question.

At the risk of sounding sarcastic, I really do hope that Axl considers staying in his chair. It did wonders for his performance. Without the pressures to move five or ten feet in one direction, Axl’s voice didn’t just hold up. He sounded near perfect as the band made its way through their hits (and some of Chinese Democracy).

Given that I’d heard the news that Axl was joining AC/DC just a few hours prior to their set and that the band was ones of last year’s headlining acts, I wasn’t too surprised to see Angus Young appear on stage in his signature schoolboy outfit with his new lead singer. The thought of Slash and Angus Young, two of my all time favorite guitarists, performing together would’ve made fifteen year old Ian scream louder than Axl as he sang “Whole Lotta Rosie” while the two rock legends shredded away.

Angus’ performance at Coachella during those two songs was enough to make me a believer in this new era of AC/DC. I don’t blame fans for criticizing the decision to carry on after Brian Johnson announced he could no longer perform due to complications with his hearing. In the past two years, the band has lost founding Malcolm Young to dementia and Phil Rudd to house arrest for having drugs and threatening to kill someone. With 3/5th’s of the band’s core lineup out of commission, no one would blame Angus for calling it a day. In fact, plenty of people are blaming him for choosing not to.

I won’t be after Coachella. I’m not quite sure where the Angus Young who sprinted around on stage like he was warming up for the Boston Marathon came from. But I’m happy he’s here.

It’s been twenty-six years since AC/DC released The Razor’s Edge, the last time the band has done anything remotely memorable. Since then, they’ve only done four major tours, counting the unfinished Rock or Bust, which should finish this June. Despite the band’s long tenure, Angus is only sixty-one, which is the fact that everyone needs to take into consideration when trying to understand why Axl Rose is now in the band.

Guns N’ Roses is similar in the sense that they also haven’t done much since the early 90s. Though GNR is a younger band, Axl is only seven years younger than Angus, a fact worth mentioning since Angus himself is five years younger than Cliff Williams, the only other member of AC/DC to be in the band for longer than ten minutes. While it’s important to note that AC/DC’s dormancy was self-imposed as the band took time off while GNR completely imploded, one important similarity remains.

Angus Young and Axl Rose are two aging musicians who are still capable of delivering first-rate performances. Sure Axl needs rest and a chair, but his voice holds up. I don’t know if that will be true over the course of an actual tour, but that’s a question for another day. Time isn’t on their side, but both appear willing and capable to make the most of what they’ve got left to give.

Coachella’s Angus showed that he’s up to the challenge of performing with an aged singer. He’ll need to solo quite a bit to give Axl the rest he needs (please bring the chair on tour), but it can certainly be done in a dignified manner that doesn’t subtract from the show. I saw on Angus on stage that wanted to push himself as he reaches the twilight era of his career. As David Bowie’s Blackstar showed us, the final act doesn’t have to be a bore.

Fans should be skeptical of an Axl Rose-fronted AC/DC. Axl has no one to blame for his reputation than himself. But don’t count this band out. The music might live forever, but what’s going on right now with these two veteran bands is special. Most importantly, it actually sounds good. I don’t expect new albums that sound even 10% as good as Highway to Hell or Appetite for Destruction, but if this is as good as it gets, count me in.