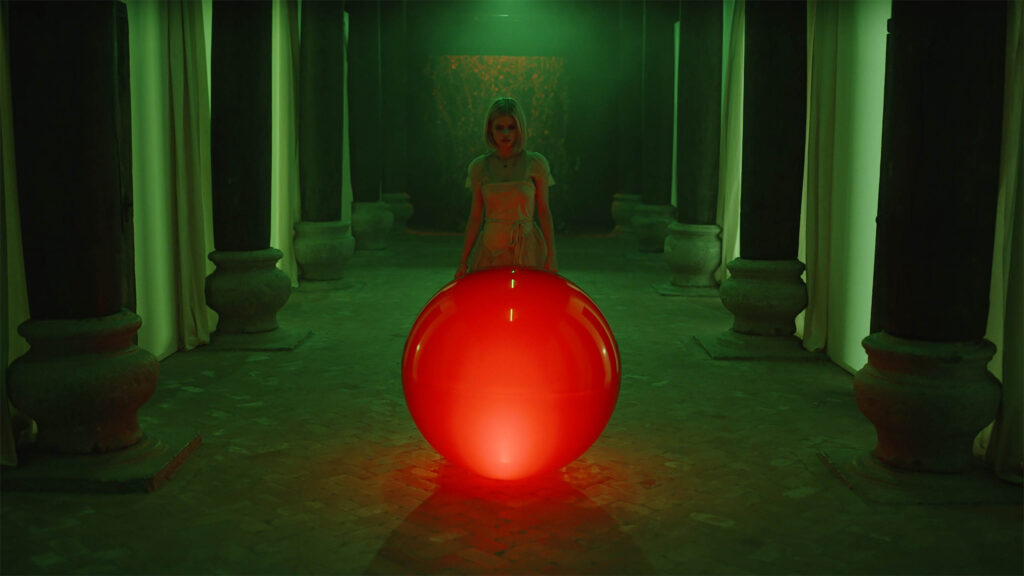 Carlson Young appears in The Blazing World by Carlson Young, an official selection of the NEXT section at the 2021 Sundance Film Festival. Courtesy of Sundance Institute.

There are plenty of films capable of winning over their audiences through their sheer inventiveness. Director Carlson Young quickly demonstrates her immense talent in the opening scenes of The Blazing World, bold shots that send the message that you’re about to enter a world of her intricate design. A firm command of the camera can only take you so far.

The narrative follows Margaret (Young), returning home to pack up her things as her parents prepare to move away. Her parents (Vinessa Shaw and Dermot Mulroney) hate each other, though apparently not enough to divorce. We quickly learn that Margaret’s twin sister, Elizabeth (Lillie Fink), drowned at a young age in the midst of a parental disagreement, a tragedy that pretty much ended any hope for them to have a happy family.

While Young manages to keep things interesting through a chunk of the first act, the whole experience starts to fall apart when Margaret steps through the rabbit hole, embarking on the film’s reality-bending trip clearly inspired by Alice in Wonderland, The Wizard of Oz, and Pan’s Labyrinth among others. Just as things are about to get going, the main event, Young starts to muddle the waters beyond any narrative comprehension. Demonstrating immense directorial skill early on, it’s rather tragic to watch how boring The Blazing World quickly becomes.

Not even a competent showing by B-movie icon Udo Kier, playing a creepy man called Lained, can break through all the nonsense. Occupying a space somewhat halfway in between the Red Queen and the Cheshire Cat, Kier is menacing, but never really all that interesting. The script never really gives anyone anything to do.

As an actress, Young dominates most of the early scenes, an energetic personality amidst a sea of depressing figures. Largely left to her own devices throughout the rest of the narrative, Margaret loses a lot of steam. She communicates nothing as a protagonist, exacerbating the diminishing returns from Young’s stunts with her camera angles.

Young clearly has ballet on her mind with The Blazing World. An early scene between Margaret and her father hints at this direction, enhanced by a classical score that includes a beautiful rendition of Tchaikovsky’s Pas De Deux. Everything in ballet, from the music, the set design, the corps de ballet, and the male dancers, all works to enhance the principal. A ballet cannot succeed without a strong danseuse étoile to anchor the entire experience. Margaret is far too aloof to carry that burden.

Young’s technical skills as a director can’t overcome the gaping hole at the center of her narrative where there should be a story. An expansion of Young’s earlier short of the same name, The Blazing World never tries to justify why this story should carry a feature-length runtime. Everything is just too jumbled up, a disappointing showing from a talented filmmaker.