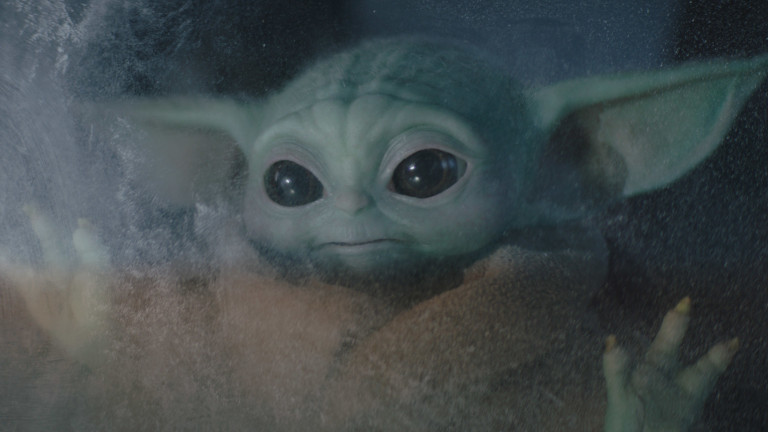 Big reveals like last episode’s Boba Fett cameo naturally create a sense of anticipation that The Mandalorian is obviously not in any rush to address. For the most part the show does a pretty good job with episodic storytelling, delivering quality television in a way that makes you okay with the fact that the big questions aren’t going to be answered any time soon. Elaborate action sequences and short episode runtimes don’t leave a ton of time for narrative.

Episode Two, “The Passenger,” does not care about story. The pieces of this episode feel like puzzle pieces that were jammed together out of place, reverse engineered to justify a giant spider sequence. This is by far the clunkiest narrative of The Mandalorian thus far. Frog Lady (literally the name listed on the show’s IMDB) is nothing more than a plot device.

The episode starts off with a fairly impressive action sequence on the outskirts of Tatooine, involving a failed attempt to ransom Baby Yoda for Mando’s jet pack. Baby Yoda’s cutest moment in the episode came early, delivering a sly glance of approval toward his adopted dad’s antics. Obviously the bandits were not going to get away with stealing Mando’s toys.

We run into Peli Motto at the famed Mos Eisley cantina, playing sabacc with a giant ant, a not-so-subtle nod to episode director Peyton Reed, who helmed both Ant-Man movies. Peli’s scenes last episode were fairly rushed and perfunctory. Here, Amy Sedaris works her charm with a bit more screen time, albeit in an exposition-heavy sequence that almost immediately got right to the chase.

I’ve been thinking a lot about Mando’s early conversations with Greef Karga. Carl Weathers was given plenty of time to make his character shine, providing a valuable ally for Mando to interact with. This show doesn’t have a ton of recurring characters.

Peli is given a fraction of the time that Greef received, while essentially aiming to serve in a similar function. Peli got a few lines of rushed banter in before neatly advancing the plot, the kind of fast pacing you’d see on an episode of Law & Order. Can’t she have a moment to breathe?

The bigger issue with this whole dynamic is that the show has yet to make a case for why the audience should care about Mando’s quest to find other Mandalorians. The mission feels like an obligatory plot device, a notion in line with the amount of time it’s received these past few episodes. The show doesn’t need to solve this narrative right away, but it would be nice if The Mandalorian at least made an attempt to explain the importance of this season’s broader arc.

Detours can be fun. Seeing New Republic x-wings is fun. This episode had excellent action sequences, but time and time again it failed miserably on the narrative front. The sub-light travel mandate was only sort of convincingly explained, a slight step up from Frog Lady using pieces of the mercenary droid Q9-0 from last year’s sixth episode to communicate.

The weakest scene by far involved Frog Lady trying to guilt Mando into saving her eggs while the Razor Crest sat on an unstable pile of ice chunks with a giant hole in its hull. Are we really supposed to care about these eggs when Baby Yoda has been repeatedly chomping on them? Did Frog Lady notice what the little guy was doing, even after she’d saved his life?

Baby Yoda is cute and all, but the show too often tried to play it both ways with the eggs, using them for humor but also as an emotional anchor propelling Mando to care about Frog Lady. The spider sequence was fun to watch if you don’t think too hard about why it took Mando so long to use his flamethrower. Assuming these spiders fear fire like most arachnids, Mando could’ve easily kept them away from the ship.

The follow up scene with the New Republic pilots similarly fell flat. Maybe they had time to learn Mando’s noble history while flying around looking for the Razor Crest enough to not want to arrest him, though it’s unclear why they wouldn’t help him fix his ship. That hole looked pretty bad, though maybe not as big an issue as when the Jawas stripped his whole ship in the second episode of last season.

The stellar action sequences weren’t enough to make up for the cringeworthy nature of practically every scene involving dialogue. A strong contender for worst episode of the whole show. Bad Mandalorian is still fun Mandalorian, but this show is capable of better than this clunky plotting and bad writing. It’s hard to give filler a pass when it is this poorly assembled.

Be sure to check out Estradiol Illusions’ Mandalorian podcast recaps!