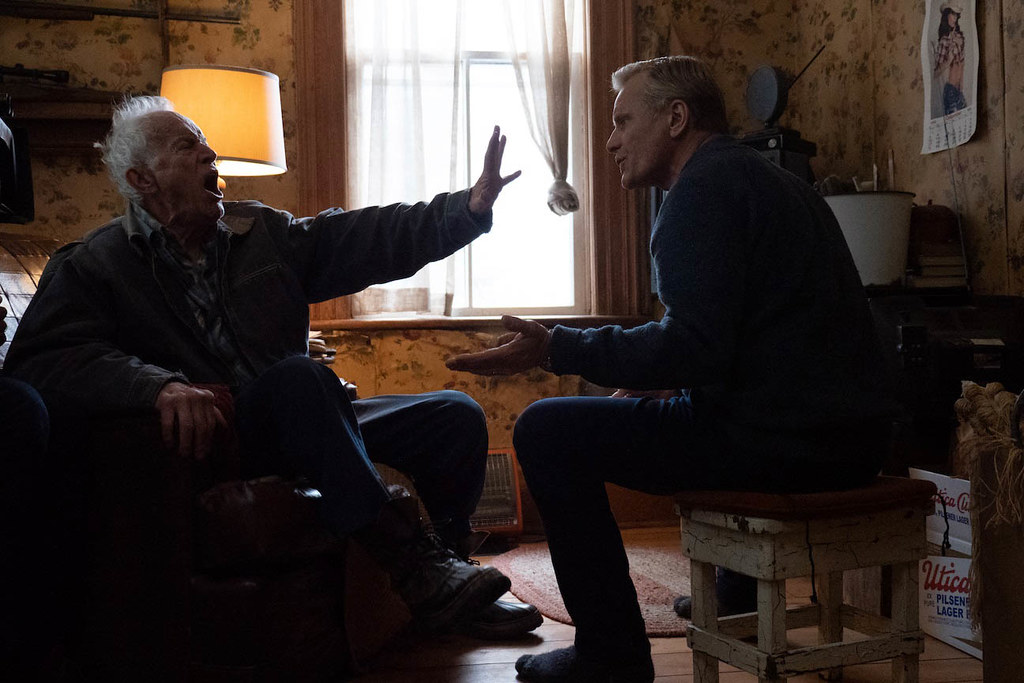 Lance Henriksen and Viggo Mortensen appear in Falling by Viggo Mortensen, an official selection of the Premieres program at the 2020 Sundance Film Festival. Courtesy of Sundance Institute | photo by Brendan Adam-Zwelling.

Far too many members of the LGBTQ community know what it’s like to have parents who won’t accept them for who they are. Falling is a film about long-frayed familial bonds, featuring a father suffering from dementia with many sins beyond simply being a homophobe. Pulling double duty as director and lead actor, Viggo Mortensen struggles to make a compelling case for why the audience should care about a dying hateful man.

John (Mortensen) lives a pretty decent life. He has a loving husband Eric (Terry Chen), and a happy daughter Monica (Gabby Velis). His happy home is disrupted by the arrival of his father Willis (Lance Henriksen), whose illness forces him to abandon his beloved New York ranch in favor of California.

Mortensen blurs the lines between past and present, frequently changing timelines as he tells the story of this troubled family. In the present day, Willis is racist, sexist, homophobic, and a bully. In the past, he’s mostly just a bully, a terrible husband and father. After a while, you get the sense that the only thing stopping him from making slurs in the past is the lack of suitable object for his hate.

Falling might be the best performance of Henriksen’s career, but the film substitutes narrative for a relentless obsession with slurs. It’s not simply excessive, it’s the entire movie. The script is so fixated on making sure that Willis utters obscenities with every other sentence that it’s impossible to care about him as a character. Despite a runtime bordering on two hours, there isn’t much of a plot. The film is mostly just about a bigoted old man and the family who, for some reason, hasn’t left him to die on his own.

The film holds back on exploring Gwen (Hannah Gross), John’s mother and Willis’ first wife. Gwen suffered much humiliation from Willis, some of it public, but the film doesn’t bother exploring her as a character. Like John, she’s mostly there to be abused by Willis.

The acting is top-notch. Laura Linney puts forth a strong supporting effort at Sarah, John’s sister in a minor role. Sverrir Gudnason does a great job portraying the younger Willis. Mortensen doesn’t really try to dig deeper into his characters, showing snippets of Willis’ life bookended by his awful behavior.

The film doesn’t really try totie itself together until late in the third act. By then it’s too hard to care. You can kind of feel for John’s predicament, but it’s just an empty experience to watch. There’s little redemption to be found in any of the character’s interactions. This is John’s burden, but it’s unclear why the audience would want to follow along.

Falling is a well-crafted mess of a movie. Mortensen’s directorial debut shows promise, but there’s a gaping hole in the middle where a story should be. Blood might be thicker than water, but few people could be bothered to care about an awful, worthless bigot like Willis. Film has better stories to tell.