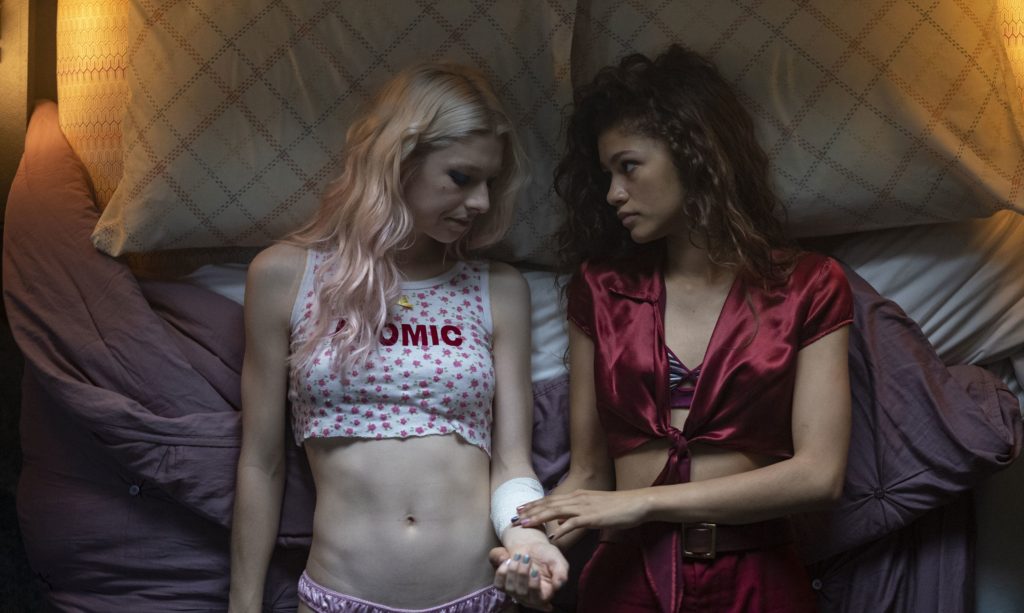 America has changed quite a bit since John Hughes started crafting his iconic narratives about the struggles of teenage life. It’s hard to imagine a group like The Breakfast Club sitting around a circle talking with each other when the option to simply stare at one’s phone presents itself. Teenagers nowadays are exposed to a whole world beyond the classroom, not just the self-portraits of genitals that circulate over dating apps. The characters in HBO’s Euphoria would have little use for the now-legal pot with fentanyl offering a far more potent high.

From an aesthetic standpoint, Euphoria aims to provide a certain kind of visual high, with luscious color schemes that draw the audience into its elaborate sets. The desire to go beneath the surface, to understand the drive that makes these kids behave in such destructive ways, remains present through each episode. Trouble is, the show doesn’t really have anything to say.

Zendaya anchors the cast as Rue, a drug addict caught in the cycle of addiction. Rue also serves as the show’s narrator, often providing illuminating background on the show’s other characters. Zendaya’s performance suggests a level of depth to Rue that Euphoria seems all too content to leave unexplored. There remains the idea that there’s a hidden complexity lurking behind her detached demeanor, but much of that sentiment feels like undeserved mystique for a show that never bothered to fully flesh out its characters.

A similar kind of dynamic plays out with Hunter Schafer’s Jules, a trans girl with a warm heart and a penchant for picking unworthy men. Schafer is an excellent actress, bringing a sense of awe and wonder to a character desperate to belong in a world that had been previously closed off to her. Trouble is, she’s not really given much to work with.

Euphoria wastes much of Schafer’s talents with its lazy approach to transgender storytelling, far too preoccupied with surface level clichés to present anything original. Jules is less her own character than a vehicle for the trauma of others, a new chapter in the manic pixie dream girl trope. The show misses an easy opportunity to break new ground in the way transgender people are portrayed on screen, instead choosing to spend its time on what an attraction to Jules might mean for another character’s sexuality.

The cast is perhaps too big for its own good. None of the male characters are particularly interesting, to some extent an inevitable byproduct of its splintered focus. Barbie Ferreira gives the strongest performance of the bunch as Kat, a teen eager to explore her sexuality in a world primarily interested in objectifying her. The show would be vastly better off centering its attention around Rue, Jules, and Kat, allowing it to go a little deeper than the tropes it consistently centers itself around.

Euphoria relies too often on shock value as a substitute for substance. There are plenty of things to like about the show, from its strong cast to its stellar production value. The narrative struggles to stand out in a world where plenty of people can look elsewhere besides premium TV to see the kinds of visual once deemed edgy. Very few television shows put full frontal male nudity up on the screen, but like the dick pics it often features, there’s just something oddly uninteresting about that kind of imagery in the year 2019.

« The Art of Self-Defense Is a Timely Commentary on Toxic Masculinity
The Kids Might Be Growing Up, but Stranger Things 3 Appreciates the Present »