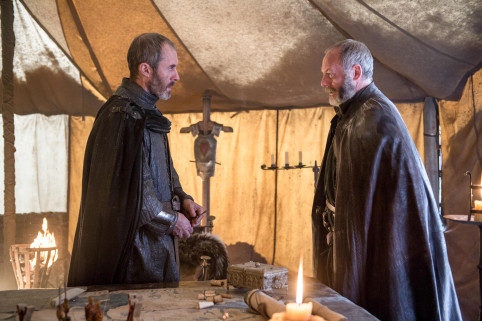 This episode felt like a premiere for the rest of the series in many ways. Maybe that’s because it featured an usually high number of storylines. Maybe it’s because Aemon died or Sansa appears to be a different person. Maybe it’s because Tyrion finally met Daenerys. With three episodes left, the direction is still unclear for many of the characters, though some plotlines are starting to shape up.

The stakes in King’s Landing are much higher than they are in the books. In A Feast for Crows, Cersei is arrested for using members of the Kingsguard to give false testimony against Margaery for infidelity, keeping in mind that Tommen is still just a boy who likes to play with kittens. Here, the Faith Militant has arrested Cersei, Margaery, and Loras on legitimate charges (for Westeros in Loras’ case).

It remains to be seen how the Sparrow will navigate the incest charges without removing Tommen as king, which I don’t think is likely. There isn’t really a replacement for the Iron Thrones, which is why characters like Kevan Lannister openly admit that they believe the rumors to be true in the later books. It’s sort of a dead plotline that won’t move forward until Dany sails across the Narrow Sea.

The scenes with the Sparrow and Lady Olenna appear to exist solely because of the talent of the actors involved. I’m sure most people at HBO are giddy to have Jonathan Pryce share the screen with Diana Rigg, but something was missing from their interaction, which has been a recurring theme for the portrayal of the Tyrells as a whole.

The Tyrells are the most powerful house in Westeros. They have the largest army and the most money (especially in the show) and yet Cersei has repeatedly had her way with Mace. Lady Olenna is formidable, but not as outright dominant as she should be. It’s worth noting that in the books, the Faith releases Margaery into the custody of Randyll Tarly when he brings a big army to King’s Landing. Showing the Queen of Thorns rotting in a dungeon makes for better television, but it’s fairly illogical.

Let’s shift gears to Stannis and Shireen. Will he sacrifice her? Unlikely, though it is possible. I still think more will happen between Melisandre and Jon Snow this season, though as of now that’s looking to be pretty impossible.

Fun Easter Egg time. Davos reports that the Stormcrows, a sellsword company that Stannis had supposedly hired, had abandoned him. In the books, Daario Naharis is head on the Stormcrows, while the Second Sons are a different company initially working for Dany but later switch sides. Tyrion and Jorah also join the Second Sons after they escape from slavery.

I’m a little indifferent about Aemon’s death, though I loved that D&D kept the “Egg, I dream that I was old” line. In the books, his death served a bigger purpose (and his body appears to as well). Here it looked like someone decided that it was time for him to die and rushed it along. I don’t think Oldtown is completely off the table for Sam and Gilly, but it doesn’t seem likely as of now. I’m sad that we didn’t get to see a Stannis/Aemon scene. I will miss Maester Aemon.

I thought it was a little odd that Ser Alliser told Sam he was low on friends. It seems as though Ser Alliser flip flops on being a semi decent bloke with every appearance. I will always love him after his speech in “The Watchers on the Wall.”

Sansa mocking Ramsey was fun to watch and made for good television, but it also highlighted the problems with the North as a whole. Seeing Sansa stand up for herself is great, but foolish from her perspective. She should be plotting. She should have tons of people besides that old woman who want to plot with her. I get that the show can’t really do a Northern conspiracy, but we should be allowed to see someone pissed off about the Red Wedding and the Boltons.

Dorne remains a mess. We still don’t have a good reason for the quest and were treated to some unnecessary exposition between Bronn and the Sand Snakes. We didn’t get enough Dr. Bashir. I’ll briefly mention Littlefinger here in the paragraph dedicated to senseless nonsense that I no longer care about. Moving on.

I actually loved how Jorah and Tyrion ended up finding their way to Dany. It condensed an unnecessarily long journey in the books and Dany and Tyrion might be the perfect remedy for an otherwise lackluster season. I still don’t know why Jorah has greyscale (I plan to bring that up every recap until we have an answer).

Episode nine is typically the “grandest” episode of the season. That’s where we had the battles of Blackwater and Castle Black. While there are two Northern battles that seem like great fits, the episode description suggests that it will likely be Essos heavy, potentially with the fighting pit scenes.

This might have been the best episode of the season. It’s hard to say. Some things are moving in a clear direction. Others feel like filler. I’m hoping Jon’s wildling visit will be more than just busywork and now that he’s armed with an obsidian dagger, I think it likely will be.