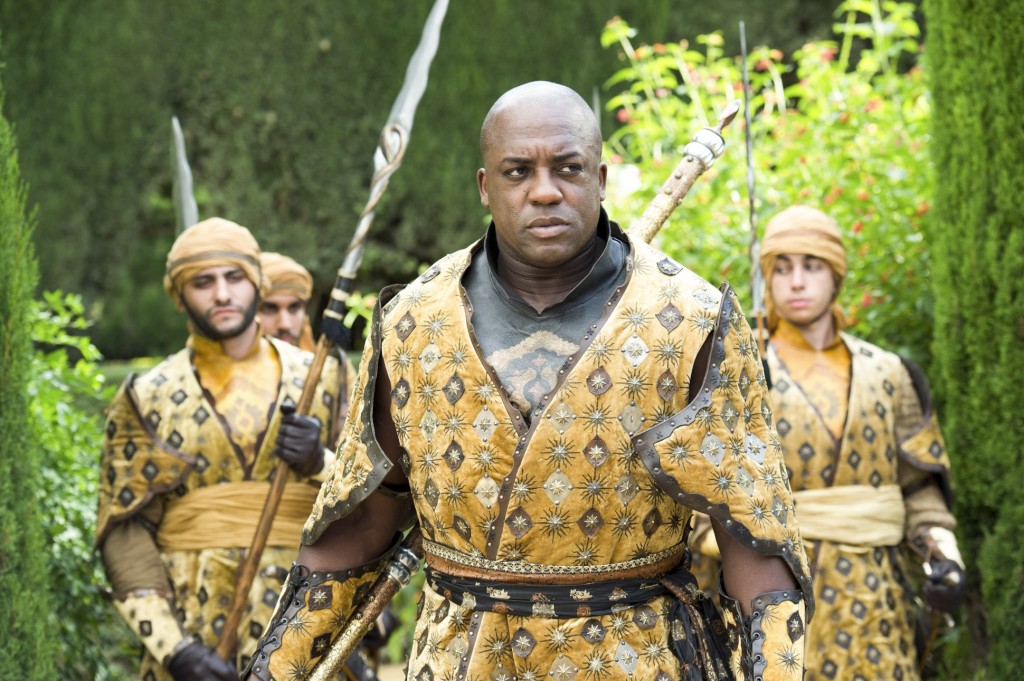 Should we begin with the implausible or the underwhelming? Or the fact that Littlefinger, King Tommen, and Lady Olenna are walking around with too few guards, considering King’s Landing has been taken over by the Faith Militant. Perhaps I’m being nitpicky, but it sort of undermines Littlefinger’s whole credibility when he can be pushed around by Lancel Lannister.

Littlefinger’s plan is ridiculous and it’s hard to see where his infatuation with Sansa Stark fits into all of this. He wants the Vale and the North (he also has the Riverlands though Harrenhal, but that’s something the show apparently doesn’t care about). What then? Cersei was correct in saying that he isn’t a military commander.

Not to mention he brokered the alliance between the Tyrells and the Lannisters. He’s got his hand in so many different things that the show can’t even keep track of them all. Which should make his endgame more interesting, but it doesn’t. It’s implausible to the point where it’s hard to care.

I’ll give Olenna Tyrell the benefit of the doubt, but she should have brought enough forces to put the Faith Militant out of the equation. That trial was ridiculous. Show Loras is often criticized (George R.R. Martin’s editor called him a “gay cartoon”) and rightfully so. He’s terrible.

The show has a weird way of handling characters with features outside the typical Westerosi norm that the books never prioritize. In the books, Loras is gay, but it’s not a big deal and it’s certainly not a plot point. Varys and Grey Worm are eunuchs, but the books don’t go on and on about their lack of manhood. Even Tyrion being a dwarf seems to be excessively mentioned in the show (though he’s better looking in the show and doesn’t waddle so). Martin doesn’t exploit his characters. D&D do.

Arya’s stuff is weird, but that’s okay. I assume she’ll be sent out as Cat of the Canals into Braavos, where she’ll probably run into Mace Tyrell and Ser Meryn. She becomes blind for two chapters in the books. I’m not sure they’ll do that here and that’s also okay.

I like the Jorah/Tyrion progression. In the books, they get captured on a boat, along with Penny, one of the dwarves from Joffrey’s wedding. I loved seeing Adewale Akinnuoye-Agbaje, whose performance as Simon Adebsi in Oz is usually overlooked on those “top TV villains” lists. I don’t know why Jorah has greyscale. Doesn’t make any sense.

Nor does Jaime’s quest to Dorne. None whatsoever. What a terrible plotline. Also, how did Ser Stumpy hold his own against the Sand Snakes when he struggled with those random people two episodes ago? Utterly ridiculous.

What was their plan? Walk in, take Myrcella with Trystan right in front of her, and then walk out? If Jaime and Bronn had both died right there, I don’t think I would have cared. Which is a shame.

I’m not sure I’d call the wedding in Winterfell ridiculous, but it was anti-climatic. There was not a single voice of Northern opposition, especially to Theon giving Sansa away which was a tremendous insult to just about everyone there except for Ramsey. They didn’t include a single line from a single Northerner attending the wedding. Where was Brienne? Why is she is Winterfell if not to stop this nonsense?

I was surprised that the show opted for a tame version of Ramsey’s wedding night. In the books, he has a far more disturbing encounter with fake Arya, who’s really Jeyne Poole. Poole had been presumably kept in a brothel by Littlefinger after Ned was arrested back in AGOT and was beaten and abused by Ramsey and probably other people beforehand. Let’s hope the same doesn’t happen to Sansa.

This season has been weird. All the Northern plotlines have been rushed and it’s hard to care about many of the others. The show seems hell bent on blowing through AFFC and ADWD, but the direction seems unclear and illogical in many areas. I’ve heard hype about a “Red Wedding”esque twist and can honestly say I have no idea what that will be.

Two fun things to announce. Aziz of the History of Westeros Podcast will be stopping by for the next Interview of Ice and Fire. Also, Five More College Dialogues was released today! Hope you enjoy them both.