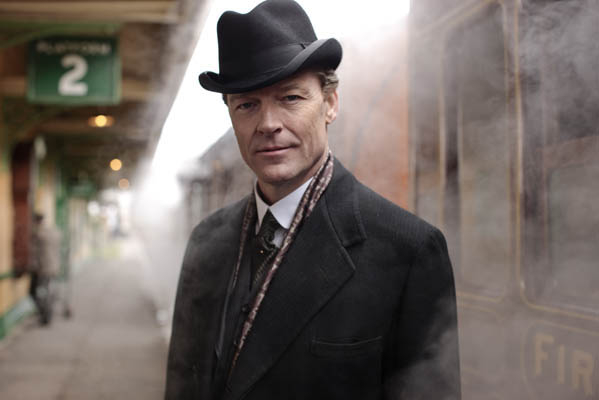 It’s not particularly hard to see why season two of Downton Abbey is often considered the best. The World War One plotline was perfectly executed and gave the show a feeling of being more than just a soap opera about rich people’s problems (not that there’s anything wrong with that). It wouldn’t be fair to solely credit the plotline for this delightfulness as the new characters played an important role in the success of the season.

At first glance, it’s easy to write off Sir Richard Carlisle as purely villainous. He certainly ended his season long arc as the bad guy. When you look at the newspaper mogul’s tenure as a whole, you see that there was more to him than just his perpetual rudeness.

Iain Glen was tasked with a difficult job in portraying Sir Richard. Julian Fellowes never tried very hard to convince the viewers that Sir Richard actually stood a shot at taking Mary away from Downton. His proposal to Lady Mary ranks among the least romantic courtships in the history of television and most of the characters expressed doubt that Mary would actually go through with marrying him.

Sir Richard was a necessary evil. It was important to prolong the inevitable marriage of Mary and Matthew. This is how television works. With that in mind, it could’ve been easy to not care about Sir Richard as it was always clear that he wasn’t going to be around for very long.

It seems kind of surprising that Sir Richard proposed in episode two, his first appearance, and managed to hang around for the whole season in a completely loveless engagement (though Sir Richard was absent for episodes three and four). Early on, he proved his use by tracking down Vera Bates and saving Mary from public embarrassment had the first Mrs. Bates revealed her transgressions with the Turkish gentleman.

The difficulty with Sir Richard was that he needed to not be sympathetic to prevent the audience side from siding with him over Mary or from too closely resembling Lavinia Swire, who was conveniently killed, off allowing Matthew to save face with the viewers. Mary herself isn’t particularly likable. Sir Richard needed to be more despicable than her, but not excessively tedious to the point that he wouldn’t be able to hang around for the duration of the season. This balance was no easy task.

When you think about it, Sir Richard’s crimes weren’t really all that bad. He had some shady business with the Swire’s early on and his attempt at spying on Lady Mary was foolish, but neither act should really condemn him as a character. It was pretty clear that Mary did not love him and we weren’t really given an alternative motive for his failed efforts to recruit Anna for some espionage other than a genuine desire to please his fiancé.

Carlisle’s big crimes were that he was rude and that nobody liked him. Other than that, he was perfectly respectable and a great fit for Lady Mary. Sir Richard’s status as a self-made man likely made him respectable to many viewers, which is a testament to Fellowes’ writing. It would have been easy to create a villainous character for Mary to fool around with for a season before finally giving in to her love of Matthew, but the more challenging route paid off.

Instead, Sir Richard was given depth. Iain Glen has a knack for playing sketchy knights (he also plays Ser Jorah on Game of Thrones, another man who lusts after a girl he can’t have) and with Sir Richard, he portrayed a character who had a clear and finite purpose, but was surprisingly entertaining to watch.

I suspect that Fellowes had Sir Richard in mind when he created the character of Miss Sarah Bunting. Like Sir Richard, Miss Bunting was an odious character who clearly wasn’t going to be around for very long, but that didn’t mean that she wasn’t given depth and a couple redeeming qualities. Perhaps they would’ve been perfect for each other.

Sir Richard came and played his part on a show he was never going to be part of for very long. To some, he might be a character that you love to hate or just plain hate without any love at all (like his relationship with Mary). As for me, I liked him. He was perfect for Mary, but that’s not what was best for the show.