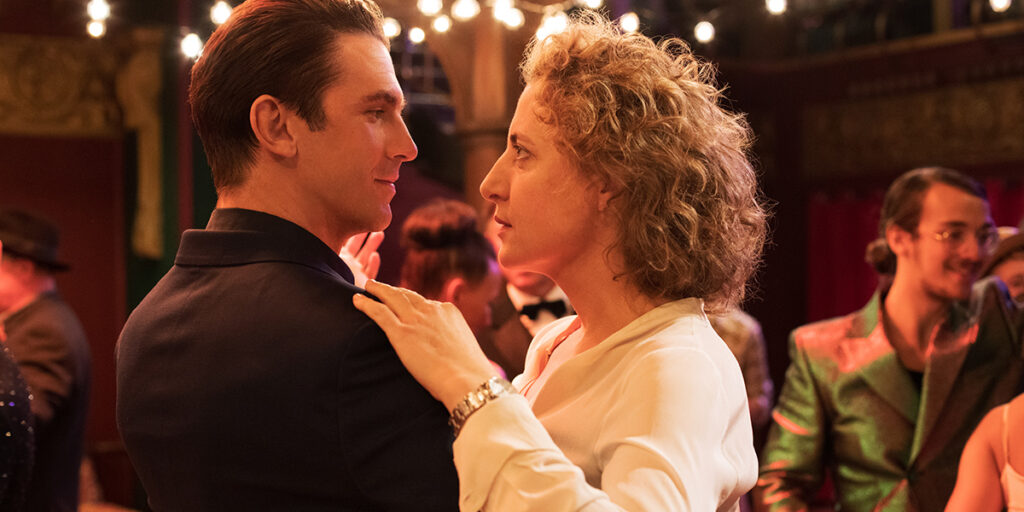 Humanity is still a ways away from crafting artificial intelligence suited for our complex emotional needs. It’s hard enough to get a Spotify algorithm to play something good, or for Siri to understand directions on the first try. We’re close enough to that reality that the thought becomes more tantalizing than narratives about Pinocchio-style objects yearning to be human. The pitfalls of online dating can make drinks with Pinocchio sound pretty appealing.

The film I’m Your Man (original title Ich bin dein Mensch) follows Alma Felser (Maren Eggert), a scientist taking part in a unique experiment. A local company has designed seemingly sentient cyborgs capable of flirting, dancing, and the ability to modify their behavior to the specific needs of an individual. Alma is paired with Tom (Dan Stevens) for a three-week trial aimed at testing the cyborg’s effectiveness. Sworn to secrecy, Alma brings Tom out into the world, society at large blissfully unaware that the charming English-accented individual lacks an actual soul.

Director Maria Schrader’s work is brimming with heart, a touching meditation on loneliness. Alma lives a fairly restrained, borderline nihilistic existence, unhappy with both her home life and her professional trajectory. Eggert’s reserved demeanor is a perfect foil to Stevens’ unrelenting optimism, charming chemistry that buoys the narrative through predictable waters. Underneath the surface, Stevens looks like he’s having the time of his life in this entirely German-language role, though Tom maintains a blissfully unaware sense of awe and wonder toward the world.

While Tom is up and away the film’s most interesting character, Schrader wisely avoids letting the narrative fall into Pinocchio territory, never really posing the question of what it would mean if Tom felt human. Cyborgs are here to help ease our suffering, not add to it by taking over the world. Schrader is firmly focused on the humanity of the actual human in the narrative.

There isn’t a lot to the world-building, a dynamic that works quite well without constantly making you wonder if the cyborgs need to use the toilet or might malfunction if someone poured a glass of wine in their face. The one area where Schrader stumbles a bit is a subplot involving Alma’s academic work. While studying a cuneiform tablet, Tom reveals that his internal supercomputer uncovered similar findings in Buenos Aires, rendering Alma’s years of research worthless.

Schrader could reasonably expect a suspension of disbelief to apply to basic questions of Tom’s functionality, but it’s a much greater stretch to bestow a genius-caliber analytical intellect upon the Siri-enhanced sex doll without ever addressing why these cyborgs weren’t being deployed in scientific capacities rather than romantic ones. It’s a question the audience is bound to wonder, a door that Schrader opened up herself. Those kinds of situations are pretty rare throughout the narrative, but the dynamic leaves a nagging sensation that really didn’t need to be there.

The first act stumbles a bit out of the gate, Alma being pigeonholed into a predictable rom-com trope. It’s one thing for her to be skeptical of Tom or his ability to make her happy, but Schrader piles on top of that an unnecessary level of reluctance by the scientist to even take part in the study. It’s a crutch that the narrative doesn’t need, the story improving greatly once Alma ditches her baseline apprehension. The film is hardly well-served by having such a fascinating experiment centered around a participant who wants nothing to do with it, countless audience members undoubtedly eager to take her place.

Schrader thoroughly wrestles with the film’s themes, finding fresh perspectives in a well-trodden genre. Stevens has never been better. Most impressive about I’m Your Man is the way that Schrader defends Alma’s outlook on life while leaving the audience room to arrive at a different destination.

A world where we go to bed at night comforted by a machine like Tom is likely not that far off in the horizon. At its core, that reality is neither a good thing nor a bad thing, another tool for humanity to find some peace in life, or a crutch to shield one from the potential pain of the outside world. Schrader gives both perspectives some breathing room while still making her own stance known. I’m Your Man is well worth the effort, crafted with such obvious love.