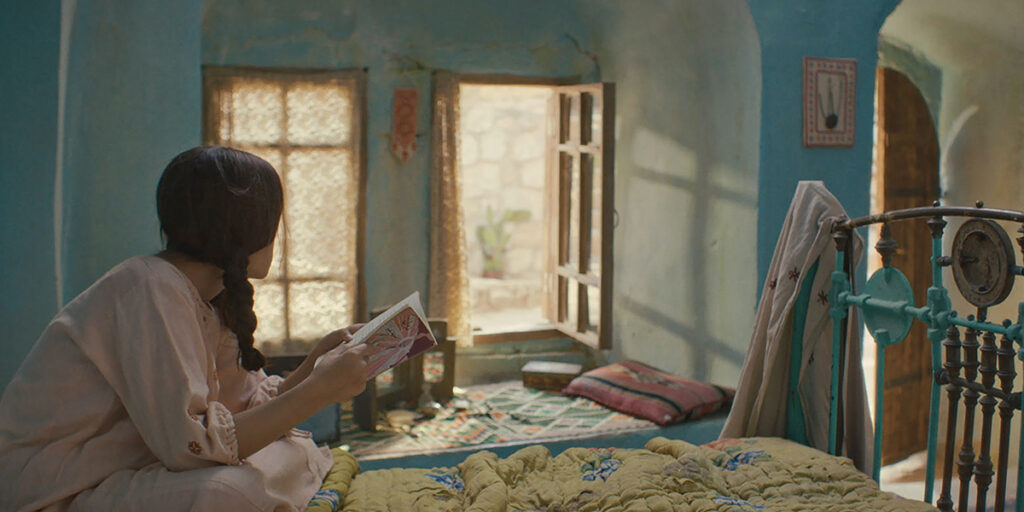 There’s a natural point in many young people’s lives when we first feel the pain of being away from home. Sleepaway camp, college, or a new job in a faraway land brings natural anxiety. Leaving the nest is certainly far more challenging when your home is quite literally under siege from hostile forces, surfacing unthinkably tragic emotions. Based on a true story, the film Fahra centers its narrative on a young girl who defied all natural inclinations to run, and clung to her childhood home as her world crumbled around her.

Fahra (Karam Taher) is a fourteen-year old girl with much the same ambitions as any of her peers across the world. She wants an education and a bit of relief from the persistent boys of her village, constantly pounding at her door with intentions of marriage. 1948 Palestine doesn’t have the same opportunities for Muslim girls as boys, but Fahra’s father (Ashraf Barhom), the head of their village, begrudgingly approves of her plans to further her studies in a big city.

With British rule of Palestine reaching its end, local villages around Fahra’s are being increasingly displaced. As Israeli forces move on Fahra’s home, she defies her father’s wishes to evacuate with a family friend. Fahra’s father locks her in their basement, promising to return once he got a handle of the burgeoning warzone around them. Of course, war has little regard for promises, leaving Fahra to fend for herself under the worst possible circumstances.

Director Darin J. Sallam’s delivers a powerful debut brimming with confidence and compassion. Perhaps most impressive is the way she completely entrusts the film to Taher, who gives an absolutely superb performance. Fahra is almost always the only performer on screen, her house serving as the primary setting, yet Sallam takes such an effective approach to worldbuilding that you feel the entire tension of the region. The 92-minute runtime flies by in the blink of an eye.

Sallam beautifully captures the conflicting emotions between a girl with quite literally nothing left to stay for, a bright future elsewhere firmly in her grasp, yet still clinging to the remnants of home. There are points where you naturally want to yell at the screen for Fahra to be sensible, but there’s nothing sensible about invaders coming to take wreck your village and take your home. Taher has such a firm grasp on the human heart in conflict with reality.

Perhaps the most striking thing about Fahra is Sallam’s quiet approach to the narrative. The narrative does contain some gruesome displays of violence, but Sallam declines to show the brutality on screen. The result is no less traumatic, but fundamentally centered on its subject’s reaction. It’s one thing to show the audience the horrors of war, but the reaction of a young girl to such carnage all around hits so much harder.

Farha is the kind of film that leaves you emotionally exhausted. Sallam’s debut is well-worth the effort. There is such beauty in the way she makes her small-scale production come to life, a powerful tour de force of indie filmmaking.