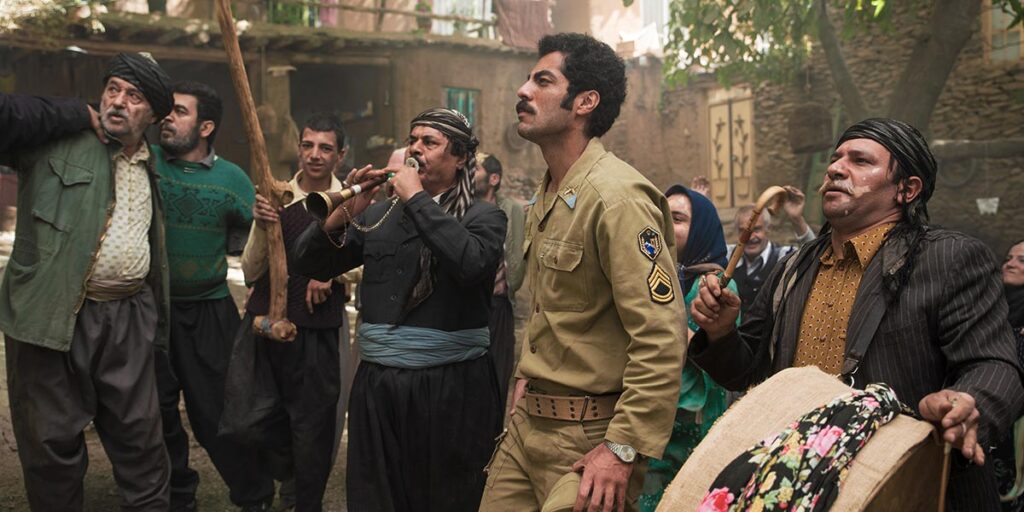 Some horror films captivate their audiences with gruesome cinematography that inspires genuine terror. Others get by on a far subtler current, like the realization that paranoia is a living breathing entity, capable of evolution and decimation. An idea doesn’t need to be tangible or rational to flex its might, a concept that director Arsalan Amiri wrestles with in his gripping film Zalava.

Set in Kurdistan amidst the 1978 Iranian Revolution, the film follows Masoud (Navid Pourfaraj), a Gendarmerie sergeant with a low tolerance for the superstitions of the village where he’s stationed, ostensibly to keep the peace. The locals are angry with Masoud for confiscating their firearms, believing that his actions caused the death of a local woman at the hands of a supernatural plague. The town puts its faith in Amardan (Pouria Rahimi Sam), a local shaman, to capture the demon in a glass jar, an act that brings about mixed emotions in Masoud, pleased to appease the villagers but frustrated by their baffling hysteria.

Masoud is an unusual choice for a lead character. Pourfaraj possesses a commanding stage presence, a devil-may-care attitude that endears his fairly unlikeable character to the audience. As the film goes on, Amiri reveals the genius of this dynamic, a non-believer slowly giving in to the possibility that his reality has in fact succumbed to madness.

Amiri has such fun with ambiguity, a delectably subtle treatise on the power of paranoia that relies on a glass jar as its foremost antagonist. The real villain of the narrative is fear, unseen hysteria that radiates through the screen. Disinterested in showing his cards, Amiri crafts his narrative in a way that doesn’t press the need for answers. One can quite comfortably let the mystery be.

You don’t really to see a giant demon eating people to feel the horror of a bunch of villagers resorting to shooting perceived victims in the legs as a form of crude bloodletting. Too many people possess a natural inclination toward conspiracy theories, wreaking great havoc even in spite of their breathtaking absurdity. The villagers aren’t even necessarily wrong to be fearful, Amiri leaves that question up in the air, but their decision-making process remains deeply unhinged from any rational thought.

Amiri’s feature debut is a very impressive effort. There are plenty of films that deploy unseen antagonists or narratives that grapple with the idea that humanity is its own worst enemy. The film’s crowning achievement is the way a remote village in 1978 Kurdistan completely captured the zeitgeist of our paranoia-riddled world.