The Mandalorian Season One Review: Chapter 7 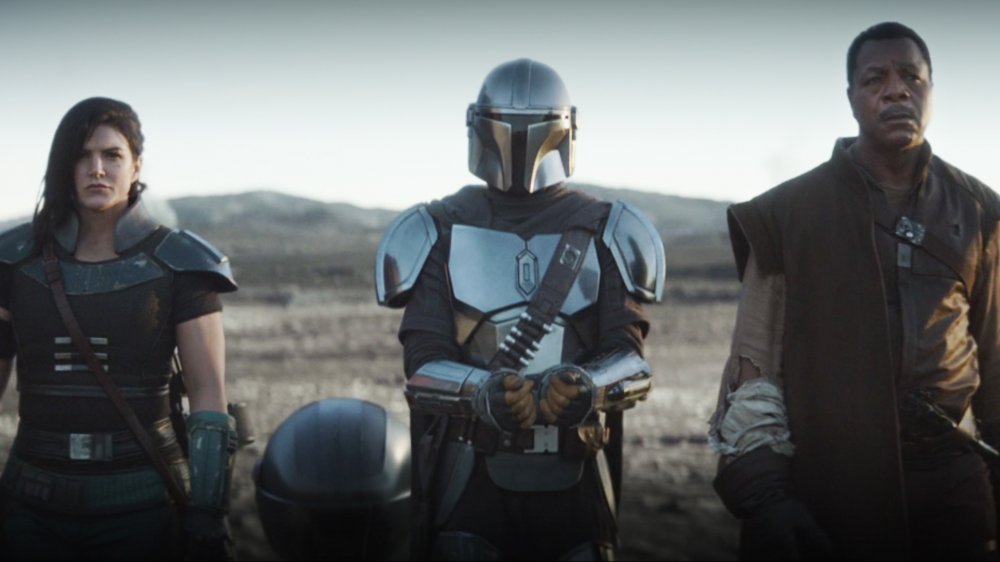 After a few episodes that were mostly episodic in nature, The Mandalorian is back to serialized storytelling, fitting for the end of the season. Giancarlo Esposito, best known for playing Breaking Bad’s arch-villain Gus Fring, was announced as part of the cast before the season started. The question of when his Moff Gideon would appear remained a subject of intrigue, especially since the final scene of Chapter 5.

Chapter 7 brought the season full circle in many ways, featuring the return of several recurring characters. Kuill, the Ugnaught farmer, and Cara, the New Republic shock trooper turned bounty hunter, are the two closest things Mando has to friends, though Baby Yoda may not identify Cara as such just yet. Both characters work well with Mando, suggesting that the show might have been better off keeping one of them, or both, around for some of the middle episodes. Mando is far more compelling of a lead when he has someone to interact with besides a Force-wielding baby.

IG-11 has been reprogrammed as a butler/nursemaid! The whole “Mando hates droids” bit is getting kind of old, but it was nice to see that the assassin robot can have a nice second career. My second recap was critical of Kuill’s place in the story, but the character brings out a side of Mando that had been missing in previous episodes.

From a narrative standpoint, it makes perfect sense that the Baby Yoda Squad would return to Navarro. It would have been a shame not to see The Client again, especially knowing how much Werner Herzog loves Baby Yoda. The logic behind such a move against a powerful figure makes a little less sense.

Greef Karga is probably right when he says that The Client will never stop hunting Baby Yoda. That said, it’s difficult to say that Mando has really tried all that hard to hide from him. The past few episodes have shown him putting Baby Yoda in harm’s way for the sake of jobs, unlike his past attempt to lay low on Sorgan. The galaxy is supposed to be big.

This whole dynamic grows more complicated when you think about how Obi-Wan decided to hide Luke. Anakin may not have known that Padme was pregnant, but Obi-Wan hardly came up with much of a plan in sending the baby to live with Darth Vader’s step-brother on his home planet, while only changing his first name. By this logic, Mando only needs to buy a remote house and start going by Ben-dalorian.

Baby Yoda showing off some healing powers to save Karga helps expose the obvious trap, leading to a change of heart that comes off as mostly sincere. The plan to deliver an empty bassinet to The Client came across as pretty ridiculous, but these sorts of scenarios are destined to go wrong. From the looks of it, The Client is dead, sadly gone before he could share another scene with Baby Yoda.

The Stormtrooper and Scout Trooper armor looks phenomenal. The sight of the Scout trooper’s on their speeder bikes was a nice throwback to Return of the Jedi, though sadly their aim has improved. Poor Kuill. His reluctance to go on the mission kind of pegged him for death. Too nice a person in this cold, cruel world.

Chapter 7 demonstrated this season’s grasp of episodic storytelling while still building toward the payoff of a serialized narrative. Moff Gideon looks to be an especially sinister bad guy, but the show doesn’t feel like it’s slow walked his introduction. The season seems destined to end on a cliffhanger, but that feels okay from where we stand now.

With only one more episode left of the season, it’s fairly safe to call The Mandalorian a great success. The action sequences have been spectacular, and the character development has been pretty strong for a show with one lead who never shows his face and another who doesn’t talk. Above all else, the show has made a strong case for shorter episode runtimes. Some of the episodes have been a bit lacking in exposition, but that’s certainly better than the drawn out filler approach used by far too many streaming shows these days.

« Season Three of The Marvelous Mrs. Maisel Is Best Enjoyed with Low Expectations
Star Wars: The Rise of Skywalker Sinks in Familiar Territory »