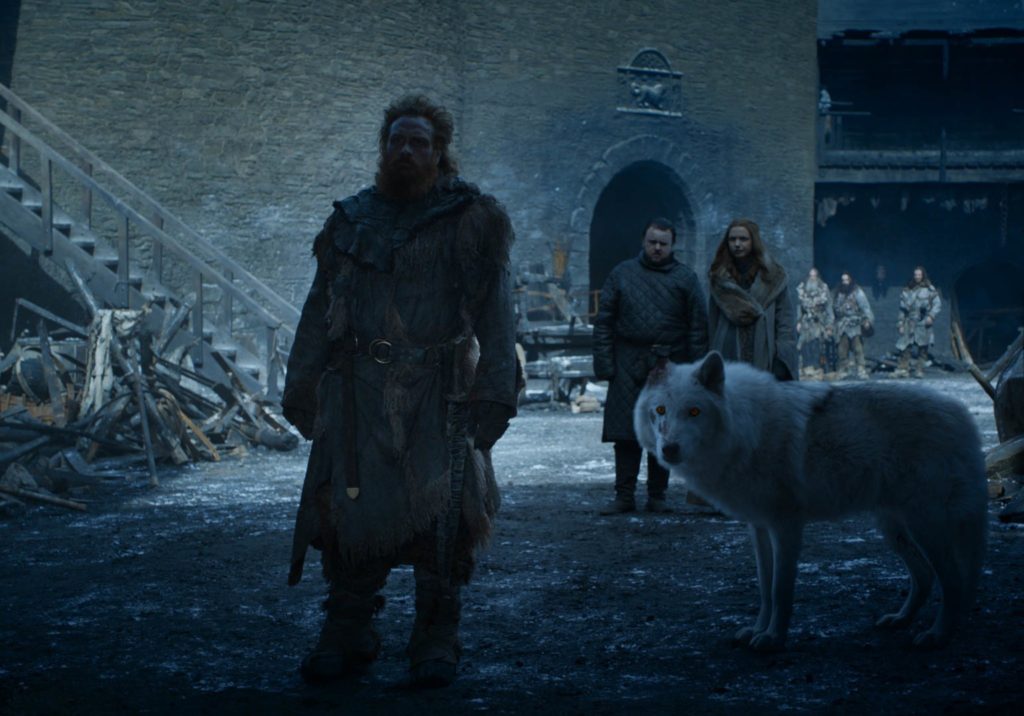 Last season presented a simple reason for why Daenerys’ first act in Westeros didn’t involve taking King’s Landing and killing Cersei. If Dany invaded King’s Landing, burning tons of people in the process, everyone would hate her forever and she’d be a bad queen. Except, this isn’t really the reason. Dany didn’t invade the capital because the show needed to keep Cersei around for the final season.

As a result, Cersei got stronger and made allies who could shoot dragons out of the sky with giant sea scorpions. Who knew that the show’s most ruthless villain was also very smart? Tyrion knew all of that and yet he gave Dany a lot of bad advice anyway. Despite this, we don’t get a scene where they hash that out, because apparently, we needed a few focusing on mutiny. So here we are, in a position where Cersei has the upper hand largely because no one else bothered to stop her.

Winterfell was mostly fun, minus the virgin jokes and the Sansa/Hound conversation. Brienne’s sexual past was a weird thing for Tyrion to joke about, having been forcibly married to the woman she’s sworn to defend, while also sitting at a table with his brother who’s only ever had sex with their sister. Strange.

Sansa’s comments about her trauma were easily the low point of the episode. Yes, she’s survived a lot to get where she is. No, she probably wouldn’t still be a “little bird” if that hadn’t all happened. It’s great that she’s become a key player, but it would’ve been nice if the show hadn’t tried to sugar coat rape and abuse like that.

Huzzah for Lord Gendry Baratheon, who apparently isn’t interested in claiming the throne now that he’s a legitimate heir of Robert Baratheon. I liked how Arya turned him down. They had their moment, but she’s not destined for that kind of life. Arya and The Hound should get a spinoff.

Dany and Jon’s bedroom scene was very bad. Mentioning Ser Jorah in a sexual context was gross, but then Dany looked all desperate begging Jon to stay in the bastard closet. Weird that the person who came to save the North now looks weaker than basically everyone else.

We finally got an R + L = J moment that wasn’t right at the end of an episode. Of course, Sansa told Jon’s secret. Why shouldn’t she?

As much as I’ve criticized the Dany/Sansa feud for feeling forced this season, it was at least in service to sensible moments of conflict. The North is tired. Yes, they agreed to help Dany, but that doesn’t mean it has to be done immediately. It’s okay to have conflict about logistics, demonstrating Sansa’s leadership abilities in looking out for her people first.

Bronn is back. Does anyone care? Me neither. Should’ve been killed off last season.

The second half of the episode felt weirdly rushed for a show that took its sweet time taking in the post-apocalypse high. Putting aside how bizarre it was that no scout ship sailed ahead to take a look at Dragonstone, this episode really didn’t need to have a Dany/Tyrion/Cersei confrontation at the end, especially before Jon arrived with the rest of the troops. Why wouldn’t Cersei just order her archers to shoot them all and be done with it?

How did anyone know that Missandei was captured? She could’ve have drowned just as easily. Equally weird that this specific news made it to Winterfell. It’s a shame that she had to die for seemingly no reason. Poor Grey Worm.

Euron is smart enough to shoot a dragon out of the sky, but apparently doesn’t question how Tyrion knows that Cersei is pregnant despite being in the North all season, a clear indicator that the baby isn’t his. Maybe he doesn’t care? Or the show doesn’t care about either situation? I don’t really care either.

R.I.P. Rhaegal. Guess the show’s budget got tired of two dragons. Only one to go.

Could Bran have warned Dany about Euron’s trap? Probably. The fact that he didn’t isn’t necessarily surprising, but it’s weird how no one in the show has tried to fully tap into his superhero powers.

Oh Varys. I’m glad he’s still alive, but these mutinies are a little tiresome. He’s supposed to be a spymaster, not the monarchy’s ombudsman. He should either serve Dany or step aside. No more scheming to switch sides.

Brienne and Jaime happened. Wish they’d left it at that without the whole Jaime leaving bit. I get that it makes sense to send him to King’s Landing, but the Jaime/Cersei plotline is one long-running element of the show I didn’t need to see resolved in these last few episodes.

Tormund’s constant lusting over Brienne was beyond tiresome, but at least he gets to give Ghost a good home. Shame on Jon for not even giving him a pet on the way out. And they think this man should be king? Bah. A man who can’t even say goodbye to his direwolf is not fit to rule.

I hate how the show has portrayed Daenerys since she arrived in Westeros. Sure, something needed to happen to bring her massive army down a few pegs, but the writing for her character has been awful. She could be sitting on the Iron Throne right now if it wasn’t for bad tactical advice. Rather than explore that notion, instead the show’s been painting Jon as the reasonable alternative.

Between R + L = J and the lack of chemistry between Kit Harrington and Emilia Clarke, their romance has suffered a lot over the past few episodes. I just wish the show could figure out what to do with them rather than drag this monarchy quibble out for the whole season. It’s totally unnecessary and quite frankly, boring.

That’s it for this week. I actually mostly enjoyed the episode despite the numerous issues. There’s a lot of pacing questions that will certainly be answered in two weeks, but it’s hard to really get behind the way this episode decided to spend its time. See you next week!