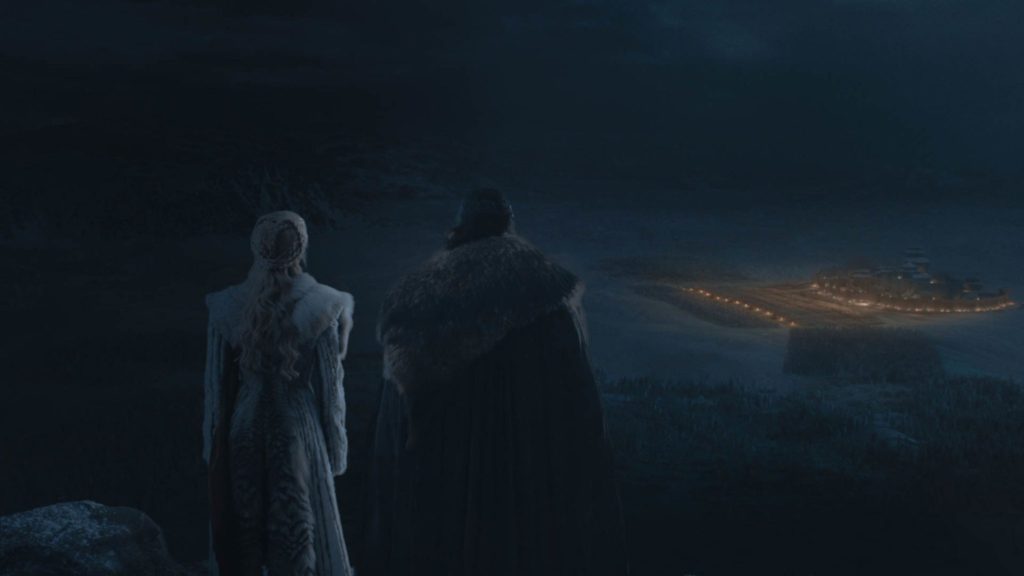 The Battle of Winterfell happened, in case you couldn’t tell because of how dark it was. Funny how this was the third big battle the show has done, but for some reason “Blackwater” and “The Watchers on the Wall” both managed to put some extra torches around. You know, for people to actually be able to see what’s going on.

Why is a battle that takes place at the Wall far less blurry than one at Winterfell? The dead might not need to see, but the living sure do. Doesn’t seem like the front line had any sort of a plan until Melisandre showed up to work some R’hllor magic on their hardware.

Why did the Dothraki charge into the abyss? How did Ser Jorah make it back alive after the first wave? How did all those main characters survive the big attack, R.I.P. Dolorous Edd of course. Does Daenerys have more than a dozen troops left?

That battle was bad. It was boring, hard to see, and lacked a sense of narrative drive behind its various sequences. A viewer could, of course, follow along, but too often the characters seemed to be going through the motions, until the time came for them to do something out of left field.

Last episode really could have used a scene where the characters explain how the battle is supposed to unfold. That doesn’t mean this episode needs to actually follow the plan, but it would’ve made Jon & Dany’s dragon ride seem a little less spontaneous. I’d say maybe they were looking for the Night King, but the part of the plan that we do know involved luring him to to the Godswood. Why were they flying around instead of covering their own troops? Who knows.

The Arya library scene, in particular, reeked of something the writers thought would be cool, so they threw in a whole suspense sequence right in the middle of a battle for the entire north. Where was everyone else? It’s not even a bad scene, but one that felt weirdly out of place as the entire castle was being overrun.

Did we need that scene in the crypts where Sansa complains to Tyrion about Dany? The show’s been trying to sell the Starkgaryen feud for three episodes now, but it’s simply not that compelling. Obviously there needs to be some kind of drama for the remaining episodes, but it’s been a hard sell with the whole potential end of the world looming.

The crypts turned out to not be a very safe place to hide. I get that no one really wanted to bring up the idea of burning all the old Stark corpses, but the carnage was utterly predictable. Very surprised that Varys survived.

Poor Beric. He died a noble, predictable death. Book Beric has been dead since just after the Red Wedding, so it’s been good to have some extra time with the character. He can be with Thoros now.

Ser Jorah is dead!!!! Finally. Longtime readers of these recaps know how much I hate that creepy disease-riddled pervert. It’s too bad we never got to see ice zombie Jorah so someone could have killed him again. Seeing Dany’s tears of joy over not having to deal with his nonsense anymore was my favorite part of the episode.

Lyanna Mormont had the saddest death. The breakout star of season six went out with a bang, taking a zombie giant down with her. Too bad she won’t be around to become Hand of the Queen when Sansa takes the crown from her odious brother/cousin.

Theon has never been one of my favorite characters, but Reek got an ending that was fitting for his character. His last hurrah fell kind of flat, but so did that whole sequence. At least his storyline got a sensible conclusion.

Arya snuck pasts hundreds of white walkers to catch the Night King by surprise! Great moment, sure. Great writing, absolutely not. The whole Godswood scene fell pretty flat, perhaps suffering under the weight of all the hype. I’m glad Arya got to be the one to stick him with the pointy end, but I’m also oddly glad that it’s over.

Sam looked pretty dead, but maybe he was just hiding in the dead bodies. Jon battling zombie Viserion while all the major characters fought to their last breaths made for some great cinematography, but it is a bit weird to think that all the major players from that sequence ended up surviving. The death count did kind of look a little low by the end of things.

Melisandre finally got her time to shine, even if it involved dying in the snow after removing her jewelry. For a character the show hasn’t known what to do with since she brought Jon back, Mel’s sendoff was pretty well-executed. It was a weird choice to try and tie in all the Arya/Mel stuff from season three, but it was pretty enjoyable to watch.

Episode three was preceded by two full episodes dedicated to building up the battle. Half of the entire final season was given to making sure this battle made TV history. That’s a lot of stock to put into one battle where no one seemed to have a clue what was going on. The setup ended up being far better than the execution.

The final battle with the ice zombies was always going to have to deal with a lot of hype. It’s something we’ve pretty much known about since the prologue of A Game of Thrones more than twenty years ago. That’s a long time to wait for something that ended up being basically a riff on The Phantom Menace’s ending, blowing up the Night King control ship to destroy the battle droid ice zombies.

While this probably isn’t going to be the last battle of the whole show, it was hyped up as the big one. It might have been the most expensive TV battle ever shot, but it wasn’t a particularly good one. It’s a good thing the writers realized Cersei made for a much better villain than the Night King, because it’s up to her to get the season back on course. Hopefully she gets some elephants. Something needs to live up to the hype.

That’s it for this week. If you’re looking for more Game of Thrones coverage, you can check out my new podcast’s recap tomorrow. See you next week!

« War and Peace Remains One of Cinema’s Crowning Achievements
Avengers: Endgame’s Gay Moment Is an Insult to the Notion of Progress »