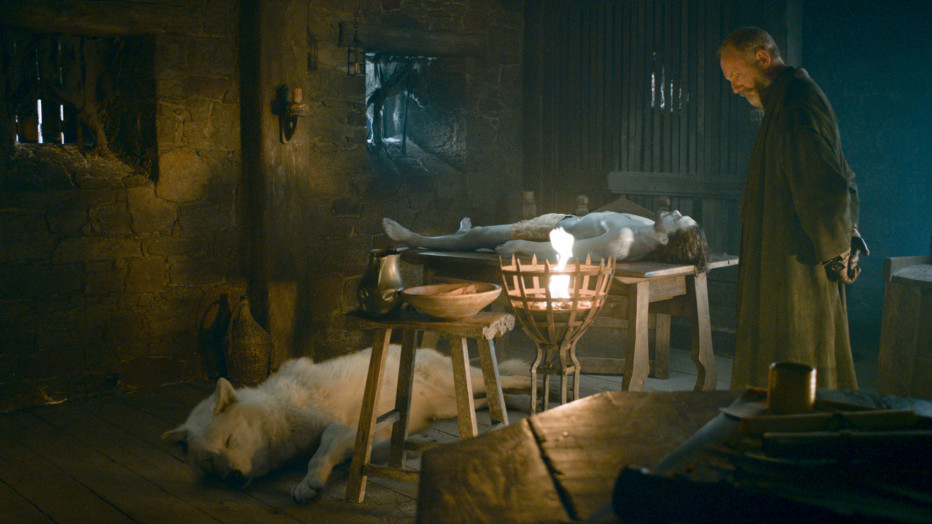 He’s back. I’m honestly surprised that anyone is surprised. This had to be have been one of the worst kept secrets in popular culture. Kit Harrington was even listed in the opening credits.

That said, I was pretty underwhelmed with the way Jon Snow’s return was handled. Not only was the reviving ritual fairly lame, I don’t think the show ever did a good job explaining why Davos was willing to give his life to defend Jon Snow’s corpse. You can say that he didn’t believe that Ser Alliser would have actually let him go, but that was communicated.

It all felt too inevitable, including Melisandre’s presence. Which is what you get when you hype something for a year. Considering that every one of the brothers of the Night’s Watch standing in that room knew how important it is to burn corpses before they become White Walkers, I just wasn’t very impressed. It felt lazy. Foreshadowing Jon’s revival in previous seasons doesn’t mean that you don’t need to explain why characters make the choices they make. Davos is probably my favorite character left and the show should’ve given him more of a reason to be willing to put his life on the line on a whim like that.

The show is obviously setting up a Jon/Ramsey conflict as the Lord Commander is now released from his vows, having died. I don’t mean to suggest that I’m angry that Jon is back. His return just represented the same kind of lazy writing I’ve criticized the show for over the past two years.

Bran is back too! I’ve been critical of how eerily similar Bloodraven’s hideout is to Dagobah, both in the books and the show. Bringing in Max von Sydow to play a more colorful Bloodraven is probably a good idea for the show, but he did seem a little Obi-Wan Kenobi-esque, which is exacerbated by the fact that von Sydow was just in the new Star Wars.

I’d give the show points for how they handled the fact that Bran is now too big to ride on Hodor’s back, but I’d have to take them away for the fact that both Bloodraven and Euron Greyjoy both only have one eye in the books. Not really a big deal, but sort of annoying for book fans, especially since they were both introduced/reintroduced in the same episode.

King’s Landing continues to be a bore, which is a shame considering how many talented actors are involved. The High Sparrow storyline needs more direction. I did enjoy seeing Ser Robert Strong, but wish the show would at least make some effort to explain the current political structure in KL. I’ll give the show some credit for how it’s handled Tommen, who isn’t a particularly interesting character in either the book or the show.

The lack of guards continues to be annoying. Are we really supposed to believe that anyone thinks it’s a good idea for Tommen to walk around with only his one handed uncle/father as protection? The same holds true for Tyrion in Meereen and even Roose in Winterfell. Less people makes for a more intimate scene, but it isn’t very realistic.

Meereen is a mess. Killing off Hizdahr may not have been a big loss, but why does Meereen not have a single local official acting in any capacity? Are we supposed to believe that the Tyrion/Varys/Grey Worm/Missandei quartet is handling everything? I don’t think the show needs a ruling council like the books, but the current situation is borderline laughable. Tyrion did deliver the line of the night with “I drink and I know things.” That makes up for the ease with which he freed the dragons.

Roose’s death was a bummer considering how he was just talking about the Northern political structure, which is one of my favorite parts of A Dance with Dragons, but I get it. As I said last week and in my video, the show appears to be getting rid of characters it doesn’t need moving forward and that’s okay. I loved how Roose mentioned how preposterous it was to suggest killing the Lord Commander of the Night’s Watch given how revered the order is in the North. Both he and Fat Walda will be missed. Ramsey got to be a monster in a way that progressed the story.

One thing that really irked me was the introduction of a new son of Rickard Karstark. This might be a minor detail, but the death of his sons was used as legitimate rationale for why he was so pissed at Catelyn for letting Jaime go. Having a new son pop up out of nowhere cheapened that.

Shouldn’t Brienne at least consider killing Theon for treason? Her character’s righteous indignation is appalling. Though we still don’t know for sure if Stannis is dead.

In The Winds of Winter sample chapters, Stannis is currently holding Theon, and Asha/Yara, captive and at least publicly plans to kill him to appease the Northerners, though he’s too valuable of a hostage for that to be fully believable. This has led me to think he’ll at least consider taking the black. I liked how the show referenced that possibility as well, though it’s probably not the best direction for the character.

The reintroduction of the Ironborn was handled quite well. Balon had more personality in this episode than he ever did in the books, though we only see him in A Clash of Kings. It was interesting to see Euron personally kill him as this has not be confirmed in the books, though it is basically a foregone conclusion that he hired an assassin, likely a Faceless Man, to carry out the deed. Like many, I am very excited for the Kingsmoot, which could be the highlight of the season (maybe).

Arya wasn’t in this episode much either, but that’s okay. Her storyline with Jaqen doesn’t need to move faster than it is. As I said last week, I didn’t expect Arya to remain blind for very long.

That’s it for this week. No Dany, no Dorne, no Littlefinger, no Pycelle, but this episode had enough going on. Despite my criticisms of Jon’s revival, I thought the episode did a good job building on last week in establishing the season’s storylines. Very little wasted time.

Just a reminder, I do live video recaps on my Facebook page after each episode. See you next week.