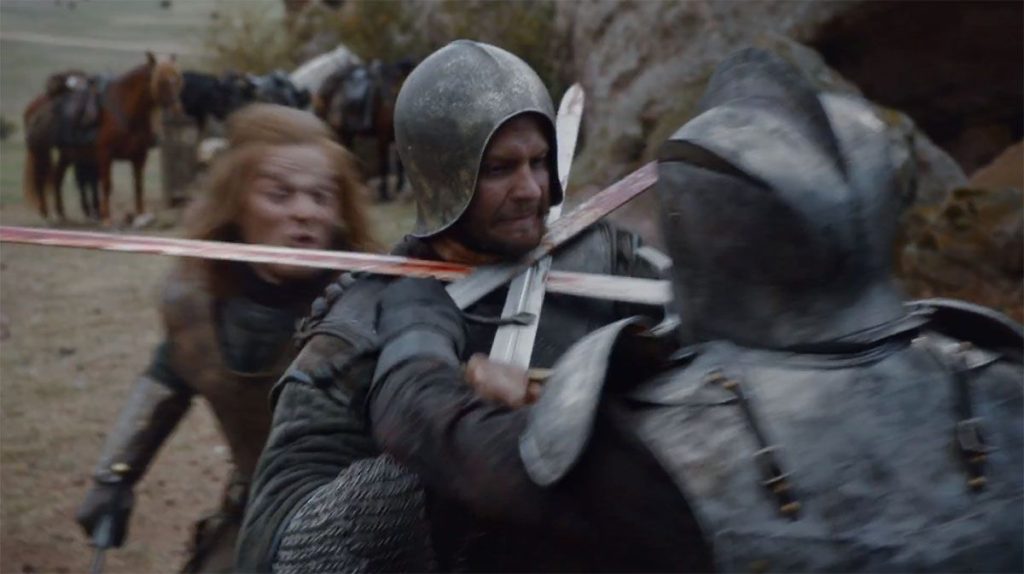 The title of this episode, “Oathbreaker” is important as it’s just about the only defense that can be offered for Jon Snow’s desertion from the Night’s Watch. Many fans, including myself, expected Jon to leave the order, with the justification being that his death released him from his vows through the second line of the oath, “it shall not end until my death.” Trouble is, not only was this reasoning nowhere to be found, it was kind of irrelevant at that point.

The show could still reference the vows and it probably should, but that defense became moot the second Jon used his status as Lord Commander to execute Ser Alliser, Ollie, and the other conspirators. Jon’s death is an acceptable loophole, but he didn’t use it. He just resigned, breaking his oaths. This signals a big change in Jon’s character which should be very interesting to watch moving forward.

Samwell is back… The only reason I’m even remotely interested is because his father, Randyll Tarly, is one of the best tertiary characters in the books. What will be interesting to see is how the show handles the fact that becoming a maester takes years, which Sam doesn’t really have. I don’t expect to see Archmaester Marwyn in the show, but that would be very exciting as well.

Despite the great sword fighting, I was not a fan of the Tower of Joy. This is a major event in the books that was almost treated like a throwaway. While I understand show fans who aren’t familiar with the books aren’t going to have the same reaction, this is still a crucial element on a certain someone’s parentage. Howland Reed was also just kind of tossed in there like it was nothing.

In defense on the show, there are advantages to covering this flashback stuff through Bran’s dreams. In the books, we see glimpses of The Tower of Joy through Ned’s perspective in the first book, often through fever dreams. Obviously the show can’t do that with Ned dead and all, and it wouldn’t have made sense to do it back in season one. It just didn’t feel as important as it should have.

I’m not in love with the Dany storyline, mostly because I don’t think it’s necessary to add in the bit about the Khals needing to decide whether or not she can stay. The dialogue was a little weak, a common problem throughout most of the episode. I do suspect that Dany will use that opportunity to unite the Dothraki behind her cause, which forgives this current lackluster elements of the plotline.

Meereen improved slightly. Varys actually did something and to top it all off, there were actually guards present! You know who didn’t do anything? Grey Worm! The show even acknowledged how boring he is. If only the four amigos could go on a field trip somewhere. Maybe to Asshai? A man can dream.

Part of my dislike of the Meereen plotline comes from knowing that the show can’t really get into the huge war with Yunkai like the books, which makes Tyrion’s presence in Meereen a bit of a waste. I also hated how the show expects us to believe that the Unsullied are capable of fighting a war after how weak they were made to look all last season. It’s just lazy.

King’s Landing continues to be a mess, even with the return of Olenna Tyrell. Diana Rigg is a superb actress, but the whole plotline lacks any clear direction. The returns of Kevan Lannister, Pycelle (finally!), and Qyburn was nice and all, but still made me wonder why none of them seem too particularly concerned with how dismal the current state of affairs are, even though their combined forces could easily wipe out the Faith Militant.

I loved how the show made Qyburn look human with the “little birds,” who can’t talk in the books and are unwaveringly loyal to Varys, even after he left. Qyburn’s motives are one of the great mysteries of the later books and the show is doing a great job with a fairly minor character. It’ll be interesting to see how good he is at Varys’ job, which I’m hesitant to fully label “Master of Whispers” just yet.

Ser Gregor being called Ser Gregor was interesting. In the books, he’s known as Ser Robert Strong, with his true identity serving as a matter of speculation. I’m pretty okay with the switch as Ser Gregor being dead was crucial to the alliance with Dorne, something that doesn’t really matter here.

The show impressed me by adhering to its own continuity quite well at the meeting of the small council regarding whether or not Jaime rightfully had a seat on it. In the books, the Lord Commander always has a seat, but Ser Barristan was not present at the meetings in season one, nor was Jaime when he became Lord Commander, though he was rarely in KL for any of them.

The question of the seat does undercut the decision to dismiss Ser Barristan back in season one. If the Lord Commander doesn’t automatically get a small council seat, why did Jaime even need to be LC at all? That decision, along with appointing Tywin as Hand and Janos Slynt to the small council was all part of Cersei’s power play. Jaime still sort of fits into that, but definitely not as well.

Arya continues to quietly be one of the show’s better storylines. The plotline doesn’t take up a ton of time in the books and this is likely a case of less is more in the show as well, which is hard to do with a character as popular as Arya. The pacing has been superb. I imagine there was a bit of foreshadowing with the mention of The Hound, who is pretty much confirmed to be The Gravedigger in the books.

The Bolton/Umber scene was the worst of the season. Just awful. I get that the Greatjon hasn’t been around since season one and show viewers don’t care about him, but are we supposed to believe that “Lord Umber” is stupid enough to go to Winterfell and insult a known psychopath while asking for his help even though he wouldn’t bend the knee? None of that was even remotely believable, including discovering Rickon Stark and choosing to deliver him to Ramsey. I’d say poor Shaggydog, but it’s probably for the best that he isn’t involved in such a ridiculous plotline. Call it euthanasia.

Finally, I’d like to acknowledge how great a character Ser Alliser was in the show. His plot progression was almost completely different from the books, as he was not at the Battle of Castle Black and did not participate in the mutiny, but Owen Teale did an excellent job portraying him. And now his watch has ended!

That’s it for this week. Still no Littlefinger, even though he was in the “previously on.” I do think that this season is a significant step up from the last one. There’s a bit going on that makes no sense, but it’s been good fun. Just a reminder, I do live video recaps on my Facebook page after each episode. See you next week.