The Martinese Knot: Can We Fault George R.R. Martin for Not Finishing The Winds of Winter? 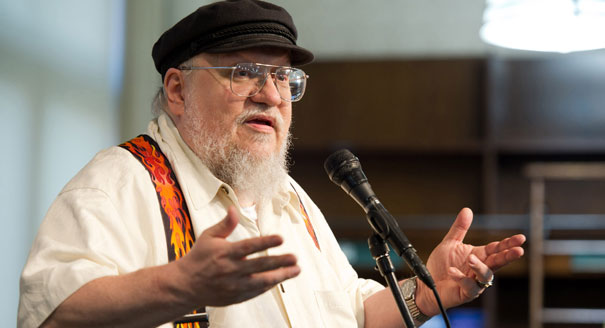 It’s official. The Winds of Winter will not be out before the sixth season of Game of Thrones. George R.R. Martin recently put out a lengthy blog post explaining the delays and apologizing to the legions of angry book fans. Many writers, most prominently Neil Gaiman, have rushed to his defense, urging book readers not to berate Martin’s slow creative process.

As a dedicated fan of A Song of Ice and Fire as well a published author, I know that the delay is both frustrating and understandable. I find it horrifying that a TV show would overlap a book series, but I can’t fault a fellow author for taking his time and enjoying the spotlight. I’ve written about the important work GRRM does with his anthologies, using his star power to help dozens of sci-fi and fantasy authors gain much needed exposure. Few, if any, mainstream authors do more to promote their genre than GRRM and I’ll always respect him for that.

Fans of ASOIAF know that the show and the books are two completely different entities. Season five bore little resemblance to A Feast for Crows and A Dance With Dragons. There is the risk that big storylines in the books will be spoiled by the show and that’s certainly legitimate. With that in mind, I don’t think it’s necessarily unreasonable for fans to be mad at Martin for the delay.

Two things about Neil Gaiman’s blog stick out to me that I don’t agree with. He titles the post, “Entitlement Issues” and then goes on to italicize the phrase, “George R.R. Martin is not your bitch.” While he’s certainly right about the second part, I do take some umbrage with the notion that wanting to see a book released before it’s spoiled by television somehow reflects entitlement.

Gaiman is right to point out that by buying a book, you aren’t signing a contract where you then get to control the author’s whole life. The audience cannot force an author to write something and if they could, it would probably be terrible. Writers need creative freedom.

GRRM can take as much time as he wants. Should he? Entitlement is one thing, but what about obligation?

An author is nothing without fans. Fans made GRRM. I may have maybe .01% of GRRM’s fanbase, but they’ve helped me get to where I’m at today and I won’t have much of a future in this business without them. We may not owe our fans our firstborn children (or dragon in GRRM’s case since he doesn’t have kids), but there is a sort of moral obligation to the people who got you to where you are. If Davos were real, I’m sure he’d say something similar.

There is also the fact that ASOIAF is not a new series. The first book came out twenty years ago. In the new foreword to The Gunslinger written after The Dark Tower was finished, Stephen King wrote about how he’d receive letters from fans who were terminally ill or on death row asking how the story ends. I don’t mention this to suggest that GRRM should hurry up because his fans are dying, but rather to point out the obvious. Fans invest in stories.

ASOIAF matters to many people. It matters to me. I’ve made many friendships through a common love of these books. I’ve spent countless hours obsessing over them. GRRM doesn’t owe me anything, but I’m also not going to call anyone who’s a little miffed at him entitled either.

Books matter. We’re supposed to feel something when we read. If people are angry that a TV show may ruin a book, that should be taken as a compliment for it shows what a marvelous job GRRM has done over the years.

« Star Wars: The Force Awakens Might as Well Be Called “Marvel’s A New Hope”
What Marvel Can Learn from Star Trek »